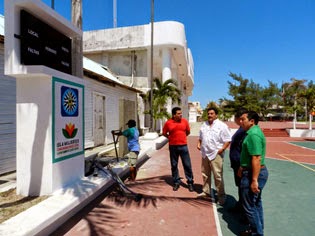 Lanrry PARRA
ISLA MUJERES, 28 de abril.-
Leer más...
The downtown basketball court Jose del Carmen Pastrana has been renovated and will be reopened tomorrow, Wednesday, at 6 pm. The fund of 529,718 pesos came from CONADE, the National Commission for Sports and Culture. The inaugural event will include a friendly match  for the Regatta Sol al Sol whose participants will compete against a team of islanders, which begins at 7pm.

No absenteeism in schools after two weeks of vacation 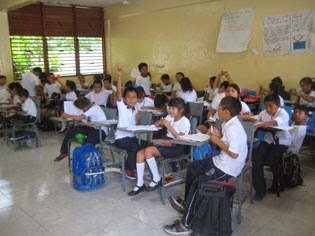 ISLA MUJERES, 28 de abril.-
Leer más...
After two weeks of vacation, 4200 students in the municipality of Isla Mujeres returned to school on Monday, with a lack of absenteeism among students, teachers, or other staff. They will only be in school for three days before an extra long weekend from Thursday, May 1 through Tuesday May 6, when they return to classes. 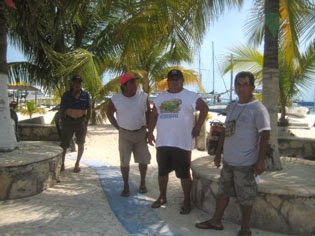 Lanrry PARRA
ISLA MUJERES, 28 de abril.-
Leer más...
Although the port was closed yesterday, Monday at 7am for small boats,  a diver of the Cooperativa de Producción Pesquera Caribe remained missing at the time of this article since the morning, when he was harpooning fish and the captain lost sight of him. The report  regarding the missing diver,  Fernando Mendez, 35, was made at 1pm by Leonel Celis, 47, captain of the 25 foot long boat "Sugey".  The captain had searched for a couple of hours before notifying the authorities.
According to fishermen and their families on the beach, Sr. Celis returned at 2pm in a visible state of worry to refuel, and resumed searching. The diver was lost in an area known as "El Dormitorio", which is three or four nautical miles from the island. As of 3pm, the vessels of the Navy had joined the search, and support from Parque Marino Isla Contoy was sought, but he had not yet been located. 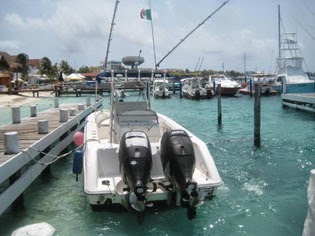 Lanrry PARRA
ISLA MUJERES, 28 de abril.-
Leer más...
The port was closed at 7am for boats under 25 feet, including crossing between Puerto Juarez and Isla Mujeres, and trips to Isla Contoy, due to strong winds from the south east.  This affected dozens of boats who cross the bay, the boats devoted to sports fishing, diving, and snorkeling,  as well as those who tour to Isla Contoy, and ~200 fishing boats.  The Harbor Master said it is expected that the port will be closed tomorrow, and there are forecasts for these winds to remain for at least a couple days. They are expected to intensify over the next 24 hours,(This was written Monday afternoon) and the port could be reopened on Friday or Saturday. The winds are making the search for the missing fishermen more difficult. 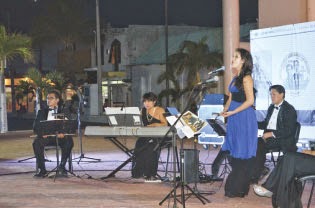 As part of the commemoration of the Centenario de la Gesta Heroica de la Defensa del Puerto de Veracruz, the Navy hosted a cultural weekend in the Town Square for the islanders with the presentation from the Naval orchestra Galeón de la Secretaría Armada de México, of the quintet  “Vivaldi” with the soprano Ciara María Quintal Ya.


Ready for the festival

Organized by DIF to honor mothers and children for their day 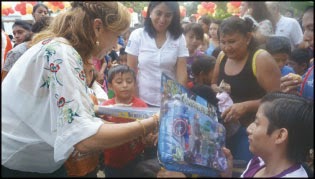 Lanrry PARRA
ISLA MUJERES, 28 de abril.- Everything is ready to celebrate “Día del Niño”  and “Día de la Madre” (Day of the Child is April 30 and Mother's Day is May 10). There will be a traveling festival, which begins on the Continental area of Isla Mujers on April 29th  On May 8, at the dome of the Community Center on the Island there will be a big festival, which is coordinated between the municipal and state  DIF agencies. They have been working for weeks and the show will include clowns, ventriloquists, magicians, souvenirs, refreshments, and toys for the children.

Authorities activated a search operation  after a young fishermen  was lost at sea while diving six miles north of the island. After swimming for several hours, the young fisherman (of the cooperative Patria & Progreso) was rescued & returned, and was healthy.

Harbor Master closed the port to navigation by small boats


Luis Mendez Gomez was with his partner, Leonel Celis, who charge of the in the 25 foot long boat "Zujey", when he disappeared around 11 am.  Sr Celis lost sight of the young man who was trying to spear fish, and when he could not find him, he returned to Isla Mujeres to make a report and seek assistance. On land, at search was being organized  shortly after 1 pm. Meanwhile at sea, the young man got rid of his ballast and began swimming to shore. This task took time and effort but he was ultimately successful. Over 15 vessels offered their assistance in the search, which was done in several areas, considering the wind and seas currents. It was after 5pm when a 'crew of his same vessel'  tripulación de su misma embarcación    found him at the edge of the coast in an area called "el ancón” (the cove).

Construction of fencing has begun around the perimeter of the 19 hectares of the Mundaca Hacienda, which some sources say is being done at a high cost to the environment, and has affected several mangrove plants. This  occurred in the area that floods during the rainy season, near the intersection of the roads to Sac Bajo and to Garrafon. It is noted that the trees that have been felled are "black or button' (negro o de botón) of the species Conocarpus erectus. It is noted that there are four types of mangrove as classified by specialsits: White, red, gray, and others. One of the workers said they were supervised by a representative from the Federal Environmental Protection agency (PROFEPA), but the worker did not provide a document to prove that to the reporter.
There has been significant progress made on the foundation of the wall, and this week they will begin placing the blocks to complete the fence, with the entrance at the side of the former house of the deceased environmentalist Ramon Bravo, said the workers.