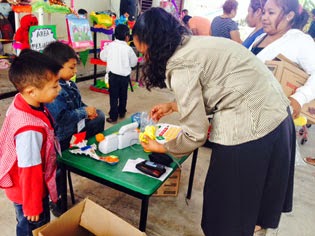 To develop the social, emotional, and cognitive skills of kindergarten students, "Gabriela Mistral" school has implemented new methods to teach basic numeric principles and reasoning skills within social and family environments.A mock department store was set up in the courtyard of the school with a toy store, a grocery story, and a  pharmacy that offered consultations and the sale of medications. The parents acted as customers and the small children attended them, managing the money and colors and distinguishing the products and services
Teacher Selene Aldana González explained that this gives them tools of everyday life and they arrive at the next educational level with more knowledge, because they have been taught more than to just draw and color.  The numeric values help them with math, and the values of society are incorporated as they learn respect and how to interact in various situations. She said they also learn about ecology, such as recycling and reusing materials. 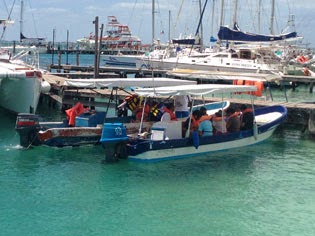 Lanrry PARRA
ISLA MUJERES, 9 de abril.-
Leer más...
The port was closed for navigation by small boats since Saturday night, and the winds from the north due to cold front #49 are causing it to remain closed.  Restricted navigation is allowed now within the the area of El Farito and the lagoon, after three days of no activity by the nautical tourism providers of Isla Mujeres. This is having a negative effect on the economies of the fishermen. The Harbor Master said he hopes weather conditions will improve for the Easter holidays.

The municipal Director of Sports, Enrique Barros,said the second edition of the "Triatlón Pirata Isla Mujeres 2014” will take place Saturday, starting at Captain Dulches at 6:30 am. It will include the disciplines of swimming, athletics, and running over various distances in the following categories: Eight and under,  9-11, 12-13, 14-15, sprint 16-19, 20-29, 30-39, 40-49, 50-59, 60 and over, and Super Sprint, with male and female divisions. Approximately 300 participants are expected and it is anticipated that they will spend the night, with the race packets being delivered on Friday, April 11th.
Isla Mujeres continues to position itself as an ideal place for sports activities, and the current administration is supportive of these events which benefit the island. The police department will be offering assistance and one of the lanes will be closed on the road to Garrafon, restricting the movement of vehicles in that area. Islanders who are interested in registering can go to the municipal Sports Office which is next to the softball field, before the MInisterio Publico offices between 9am - 4pm. Registration is free and this event is supported by Federación Mexicana de Triatlón (Fmtri).

Planning the removal of 1000 tonnes of trash

Enrique Lima Zuno, President of the Yacht Club of Isla Mujeres said that it is unfortunate that the tradition of the Regattas seems to be dying as a result of red tape by the Customs Department. Until two years ago, there were 60 participants, and this year only 15 have registered.
Although they are only here for four or five days, and not for months, they must go to Cancun for the temporary importation procedures, which causes them to lose a day of their time here. This has become more complicated by a regulation that says you cannot register a different boat in the future. Sr Lima said, "This is absurd, as anyone with a yacht eventually decides to sell it and to buy another, and then you risk your boat being confiscated." He said it is unknown whether this law is new or not, but now everyone knows there is only one temporary admission per person. He said the latest confiscation of yachts by the federal government over a year ago (Nov. 2013 in La Paz LINK ) has caused concern that this could happen here and many participants decided not to join in this traditional competition, this year.
Last year there were 42 sailboats, which has a seriously positive economic effect on the town, but this year there are only 15 registered, which is why we need to take action and seek official intervention with the federal agencies to simplify the formalities, he said.

300 athletes to participate in the "Pirate Triathlon"

Encouraging women to "levantarse" against the government

This article accuses the Chiapan mobile vendors, who protested at City Hall, of political manipulation and trying to destabilize the government of Agapito Magana Sanchez. It alleges that the  ~23 Chiapans arrived during the administration of Alicia Ricalde, and in association with man from Chiapas, all these women were brought to sell their products, beneath only one person. This was allegedly associated votes for the blue party (PAN).  Then, it is said, they received permission to work on the beaches. The female leader's  name is given in the article, and she was seen with the demonstrators, encouraging them, and using 'florido' language in response to the reporter, who chose to depart, noting the woman was gracious when the City Secretary General appeared.
Leer más...
Share

American Roaul Yates picks up cigarette butts along the streets five days a week, and was observed doing this along Rueda Medina, where he was interviewed. He lives in colonia La Gloria, where he has purchased an apartment. He told the reporter he has done this for many years, in his own country and on the island.
This example of good citizenship, without economic gain, but with a sense of social responsibility, sets a good example in the streets of our community, and surprises people.  Islanders say this man's actions are worthy of being noted, unlike some other foreign born individuals who use the name of Isla Mujeres to become rich or to ask for donations that are not properly official, which ultimately translates into fraudulent use of the name of the municipality.
Leer más...
Share

Creative, caring teachers! It says..."Thanks to the teachers of "Julio Sauri" school who are concerned about the welfare of the children. The dining areas lack tarps (awnings) and the teachers' ingenuity allows the kids to use the dining areas. SHARE with friends to see if someone is moved to donate tarps, because this is what is lacking, and at the end of the day it is for the benefit of the children."
Gracias a los maestros de la julio sauri por preocuparse por el bienestar de los niños! a falta de toldos en los comedores los maestros tienen que ingeniarselas para k los niños puedan utilizar los comedores. "Compartan amigos para ver si alguien se conmueve y donan los toldos que tanto asen falta al fin y al cabo son para los niños — with Hugo Ivan Sanchez Montalvo and 6 others. 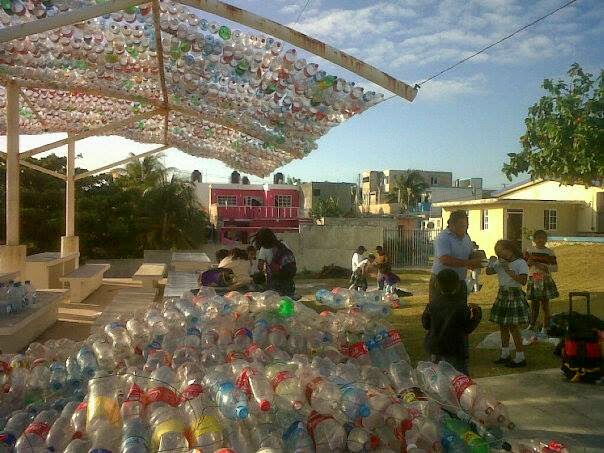