Irregularities persist with the rental agencies 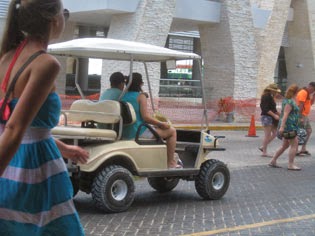 Faced with a large series of ongoing irregularities committed by various golf cart rental agencies, other agency owners are complaining about the lack of a body to regulate the agencies, although there is a representative of the Communications & Transport Agency (DCT) on the island. The alleged irregularities include exceeding the number of units allowed by their concession, for example a business limited to 20 carts is said to be renting 40 units to tourists. There are rental agencies who offer tourists special units that lack a logo, lack an number designation, and lack a public service plate ( una placa de servicio público).  There is an ongoing problem with units not having plates that are properly registered with the Office of Revenue Collection, as well as the problem of "cloning". This is when two carts are in circulation with the same plate (each displaying one plate) and both having the same number designation.

More than 32 million in public works

COPLADEMUN approval: In session presided over by Agapito

A package of public works projects for the fiscal year 2014, worth over 32 million pesos, was approved at a regular meeting of the Planning Committee for Municipal Development (COPLADEMUN) that was held in the City Council chambers and chaired by Mayor Agapito Magana Sanchez. The federal resources come from Ramo 20, Ramo 33, and FOPEDEP. The projects include improving the storm grates & drains, equipment & improvement of public security infrastructure, improvement of the park & eastern malecon downtown. The ~12.5 million pesos from FOPEDEP willbe used for paving and sidewalks & curbs (banquetas) in Salina Chica & Salina Grande, and infrastructure on Juarez avenue.
From the Habitat program, there are funds of over 5 million pesos, and over six million from the program to Rescue Public Spaces. With these monies plans include improvement to the Salina Grande walking path with paint and lighting, and enlarging the Community Development Center, and street lighting in the Continental Zone, as well as improvements to the baseball and soccer fields in Salina Chica and the construction of an outdoor gym in Salina Grande.

City Council endorses use of federal resources for various programs

Lanrry PARRA
ISLA MUJERES, 25 de abril.-
Leer más..   In additon  to the approval of the funds given in the previous article, they also approved a plan to have the Official Welcome for the participants of the  XLVI Regatta Sol al Sol at Punta Sur on May 1st. They also recognized the career and contribution to the history of Quintana Roo of the Deputy constituent Q.F.B. Gilberto Pastrana Novela. 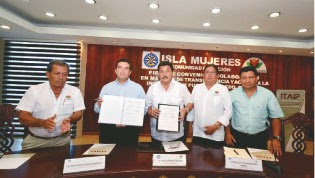 
This commitment to transparency and access to public information was signed before a notary public at the City Council chambers in the presence of various city agency Directors by the Mayor and the head of the Institute for Transparency in Public Information (ITAIPQRoo), Jose Orlando Espinoza Rodriguez. The Mayor asked the ITAIPQRoo director to send the Institute's staff to the island to offer courses and training to the public servants to aid them in fulfilling the obligations for keeping their offices and files open to the public and providing information to citizens in a timely manner.


This next week: Taxi rate increase

And the resumption of classes

The taxi rate increase is expected to begin this next week, raising the basic local rate for islanders by two pesos, from 13 to 15 pesos, and is scheduled to begin in early May. This 12 percent increase will also apply to fees charged to visitors, and rates will increase for destinations at other parts of the island, such as Garrafon, Sac Bajo, and the hotel areas.
The current prices have been maintained since they were approved by the state government in 2009, when the authorized rate of 26 pesos was set for when the vehicle leaves the taxi stand with a single user or a single family going to the same point. But when "el trayecto suben otro pasaje", the charge was automatically reduced to 13 pesos. Often the 26 peso fee was not applied to islanders out of consideration and support for local workers and users.
This 26 peso fee is will increase to 30 pesos, and the student fee will increase from six to eight pesos. The application for this increase has been approved and was made to the state government in December, 2013. The union leader explained that the taxi union members have faced steadily increasing costs for fuel, supplies, and parts, over the past four years without an increase in rates.

Inspection of rental agencies is necessary

There is a new regulation which could affect some 80 vessels of the 135 in the municipality who offer whale shark tours. The updated policies of the Wildlife Management Plan prevent one person from having more than one permit. There are individuals who currently hold up to 14 permits.
The Harbor Master, Ishmael Gonzalez Gil,  head of the Port Authority, is meeting with the mayor and the permitees to seek a solution to the problem. The Harbor Master said unfortunately the new policy will involve making changes in the authorizations and documentation procedures, to ensure  that all the vessels can take advantage of the season, which begins May 15th.

Approval of package of public works for 2014

.
Read more: Brindará edil cuentas claras
Extra ferry crossings concluding
Tomorrow is the last day of the two weeks of holidays for domestic tourists, and with the conclusion of this vacation period, the extra ferry crossings will also end, which were instituted to meet the increased demand.


Jesús Molina
DIARIO RESPUESTA
The remodeling of the multipurpose sport court in Salina Grande known as "La Juala" is nearly completed, and all that remains unfinished is the basketball backboards. Resources from the National Sports Commission (CONADE) were used. A dome was placed over this sports court, and the lighting was repaired.
.
Read more: A punto de concluir cancha deportiva
Exodus of visitors begins

Recognition for the participants of Sol al Sol Regatta