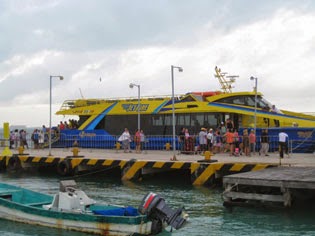 Determination of the responsibility for the accident which occurred on Thursday afternoon will be made by authorities. Utltramar manager Atruro Baez Vega said the company has not evaded any responsibilities and is paying for the expenses of the two people who received medical attention. The mishap occurred between an Ultramar ferry and a catamaran owned by Dolphin Discovery, and the  Port Authority was called to the scene.Chilean tourist Karen Olga Marecena Velez was taken to the Amerimed hospital in Cancun, then discharged later to her hotel room after it was determined her injury was not serious. The Captain of the boat Aguatours was also treated. 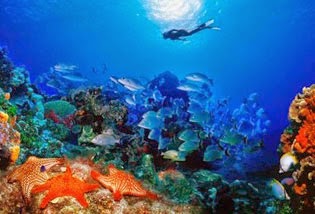 
This basketball tournament has been completed and the next championship is expected at the end of April or the beginning of May, with about 10 teams participating, which is two or three more that were in this competition. This competition was won by the team "Bahia" after three exciting and intense matches. Bahia won with a score of 74-61, and the star players names and points are given in the article. This is the Liga Permanente de Basquetbol de Isla Mujeres, group B or Second Level (Segunda Fuerza), whose champions "Bahia" defeated the team from the high school, Colegio Bachilleres. The third place team was the City team (Ayuntamiento) and the fourth place team was the Taxistas. 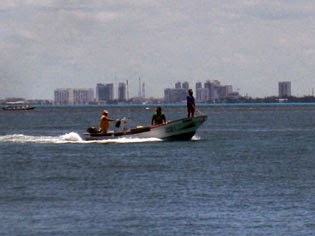 A change in a clause of the regulations of the National Marine Park has generated considerable concern among the whale shark licensees because several of them could lose their concessions. The change in the regulations would mean that permittees from Isla Mujeres could not have more than one whale shark permit. There are about a dozen people who hold about ten permits and will have to transfer those names, but the process is generally quite slow and the season begins May 15th. There are concerns about losing their concessions and they are awaiting more information.

Promotion of fishing tournament in the state of Yucatan 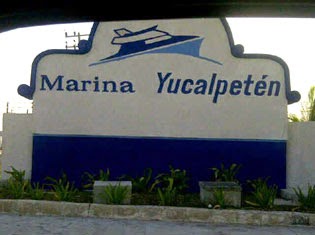 Lanrry PARRA
ISLA MUJERES, 22 de abril.-
Leer más...
Promotion of the international fishing tournament is taking place in the state of Yucatan, as well as in Quintana Roo and the final registration is at the Captain's Dinner on May 9th at 6pm. Participants are expected from Chelem, Yucalpetén, Progreso, Chixulub and Mérida, as well as other national and international boats. Prizes include 300,000 pesos for first place, a pick up truck for second place, a golf cart for third place, a Suzuki 250 cc motorcycle for fourth place, and a trip to Las Vegas for sixth place that includes four nights, and transportation. (? fifth place?). Seventh thru tenth prizes are scooters, and eleventh place is a surprise prize. The prize for the best captain is a scooter. 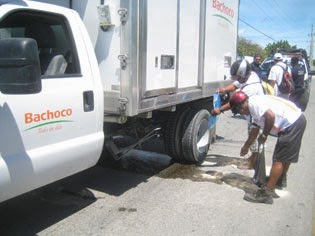 Lanrry PARRA
ISLA MUJERES, 22 de abril.-
Leer más...
A truck was making a delivery of fresh chickens at 9am to Salina Chica, when it was spilling diesel and stopped by the police. It had gone from the vehicle ferry terminal, heading south, when it was stopped by the municipal police near the Middle school Benito Juarez. A fine is expected to be given and the vehicle was taken to the impound yard. Staff from the Civil Protection agency cleaned up the spilled fuel, and the road was closed during the clean up. There were no related accidents or incidents reported. 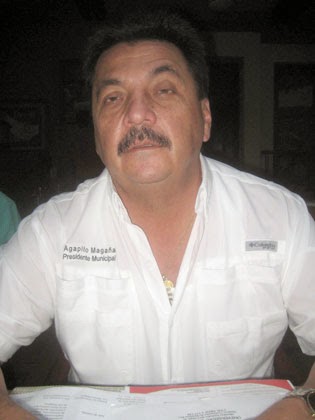 Lanrry PARRA
ISLA MUJERES, 21 de abril.-
Leer más...
The remodeling of the basketball court downtown is nearly complete and only awaits the installation of the new bleachers, after the old concrete bleachers were demolished. The work included an investment of 530,000 pesos, with funds from the National Sports Commission (CONADE).
The renovation began on March 7th and was expected to be completed at the end of March or the first week in April. The work included removal of old paint, leveling the playing area with the implementation of lightweight concrete (concreto ligero), application of non skid paint, changing of the 'tableros de juego' (literally..game boards), improving the landscaping, and installation of electronic scoreboards.
The announcement was made by the Mayor, who is in the photograph: Agapito Magana Sanchez. 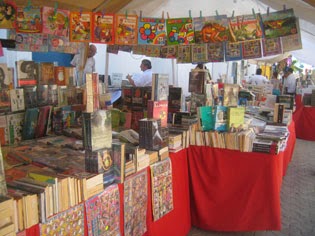 Lanrry PARRA
ISLA MUJERES, 21 de abril.- .
Leer más...
The event was scheduled for Monday April 22, in coordination with the Department of  Culture of Isla Mujeres as part of World Book Day. Additional activities included reading and a puppet theater.

Ready for the arrival of the sailboats

A total of 43,017 people arrived to the island between Thursday and Sunday.  On a normal day about 3500 visitors are transported, but on Holy Thursday that number was 7,302, and on Good Friday there were 7610 visitors transported,  and on Sunday the number was 9,080.  Never before in the history of Isla Mujeres during a single day of a holiday period have 10,000 passengers been mobilized, as occurred on Holy Saturday, said the governor, Roberto Borge Angulo.

Celebrating the 100th anniversary of the heroic deeds in Veracruz

This ceremony commemorated the heroic defense of the port of Veracruz by Naval Academy cadets against an attack by the United States on April 21, 1914. The United States invaded following an incident involving the arrest of 8 crew members of the American ship Dolphin in Tampico, Tamaulipas. The Americans demanded a public apology, which the Mexican government was willing to give, but the Americans also insisted that a US flag be flown over the Plaza of Tampico, with a 21 gun salute, and the Mexican government declined to meet this demand, which triggered the invasion of Veracruz by the United States. Veracruz was at the mercy of the foreign troops, and civilian volunteers began organizing, handing out the few rifles available. Even the inmates of the prison at San Juan de Ulua (the isle near the entrance to the port) were organized. The defense by the Naval Academy cadets was organized by Comodoro Manuel Azueta, and the defenders took cover in the Veracruz City Hall, in the doors of the hotel Diligencias, at the hotel Buena Vista, and in the old light house Benito Juarez. In the battle, Lieutenant Jose Azueta Abad and Cadet Virgilio Uribe Robles were killed. The mottos of this solomn celebration of the 100th anniversary of the Gesta Heroica 1914 is: “Hoy, como hace 100 años, veracruzanos y marinos unidos por México” ... Today, like 100 years ago, residents of Veracruz and Naval sailor are united for Mexico. (There are names of cadets from this battle on the memorial in the middle of the traffic circle in front of the Naval base.)

After Tuesday, the flow of tourists experienced a 'slump' at the points of embarkation and disembarkation in Cancun, Puerto Juarez, and Punta Sam, but a strong rebound was expected for this weekend. There were record numbers of passengers on last Saturday, with over 10,000 visitors according to the Port Authority. About a dozen medium sized boats depart from various points daily in the Cancun Hotel Zone, Gran Puerto, Puerto Juarez, and Punta Sam, moving around 5000 passengers daily, and there are also dozens of catamarans, trimarans, and boats under 40 feet which move tourists from Puerto Juarez.
There has been safety during the holidays, and protocols were increased following the death of a tourist who had a heart problem, which did not result in any complaint to the Public Ministry,  which was confirmed by a judicial source.
The Navy maintains speedboats conducting surveillance in the area, especially in locations with more activity, such as the marine parks near Isla Mujeres and Isla Contoy.

The municipal Department of Tourism reported that hotel occupancy remained at 70% during this last week of vacation. Many tourists were enjoying the beaches and other attractions of the island.

I'm all caught up except for last Monday's translations....Hasta manana!
Thanks for your patience!!

(And for those couple of ya who were less patient...please keep in mind that I am one person, doing this seven days a week, for nearly three years now, with very few gaps. Sometimes my life or my health issues intervene, making it difficult for me to meet your expectations...so maybe ya might wanna lower them a tad. In the past two weeks I've traveled thousands of miles and visited a variety of medical facilities...as well as government offices,banks,  family, friends, and some of my favorite clubs & restaurants. I've been busier than usual.)