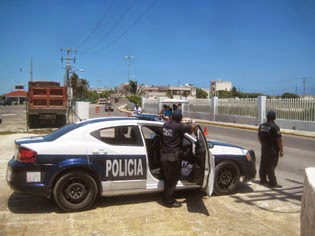 Lanrry PARRA
ISLA MUJERES, 19 de abril.-
Leer más...
To ensure the safety of visitors during the Easter holidays, the municipal police ( Dirección de Seguridad Pública )set up checkpoints by the car ferry on Rueda Medina, and by the Aguakan pump station, since Wednesday. They put up a row of cones to deter excessive speed, and protect other drivers, particularly near the whale shark monument, where many tourists stop to take souvenir photos. They also cleared Rueda Medina Avenue of parked vehicles to ensure a good flow of traffic. Only those providers supplying businesses will be allowed to park momentarily, and those who rent golf carts may only keep two carts in front of their agency. There is public parking by the Casa de Cultura and in front of the Rocamar hotel, and soon the Port Authority parking lot will be operational.

Lanrry PARRA
ISLA MUJERES, 19 de abril.- .
Leer más...
There has been five children and about a half dozen adults who have received assistance from the lifeguards. The five children, who were around three or four years of age were at the beach known as “El Riíto” (near Fenix / Nabalam), enjoying the sea, when some were crying because they lost sight of their relatives. Although the water is shallow, the lifeguards intervened because they were without supervision, and could suffer an incident in an instant. The lifeguards said they often make recommendations to parents, who may get annoyed, but it is for the sake of the children.
In another case, a 59 year old woman who was given first aid because she suffered engarrotamiento muscular (literally: muscular shin splints).  At 6pm yesterday the Red Cross paramedics went to that same beach to assist Modesta Pech Can, 59, who said the engarrotamiento muscular was caused by an allergy to cold water. She refused to allow the paramedics to transport her to the hospital, and was left in the care of her family. (Por Esto notes she suffered the cramps immediately upon entering the water, and her family called the Red Cross for assistance, who  almost immediately gave her first aid, but because she felt improved, she declined to go to the hospital. Por Esto also noted there are no vendors at the beaches, and they are vending on the nearby street Adolfo Lopez Mateos, and others have rented shops. There were no incidents during the reenactments of the Viacrusis.)
It is recalled that yesterday there was a death of a national tourist, that may have been a heart attack while swimming, but the cause is undefined and it is said that he drowned. 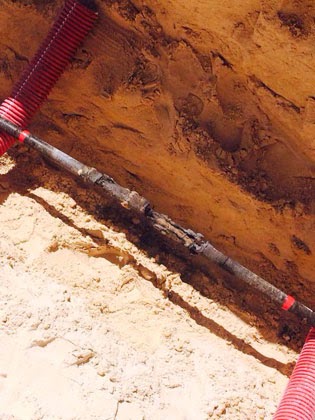 Lanrry PARRA
ISLA MUJERES, 10 de abril.-
Leer más...
The Federal Electrical Commission (CFE) used sophisticated equipment to locate the damage to an underwater electrical cable which caused a blackout for the whole island 15 days ago, and they have already repaired the damage. The line runs under the sea and arrives at the north part of the island, and the damaged area was about 500 meters before the cable enters the substation, and was about three meters underground. It was repaired without problems on Monday. 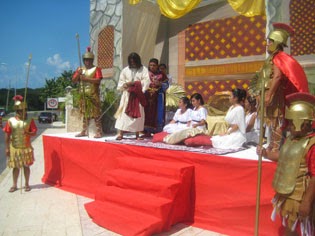 From 10am to about 3pm there were two live enactments of the Viacrucis and the Passion and Death of Jesus Christ, with the last part taking place under intense rain. The third enactment by the Sacred Heart church in La Gloria began at 10:30am, and was observed by at least 500 Catholics, who witnessed the journey by the 50 island actors for the 14 stations. There were actors portraying Jesus, Mary, Herod, and Pilate, among other characters. After the first station, where Jesus was before Pilate and Herod, he was beaten and given the cross, and the young actors walked about a kilometer through the representation of the 12 stations, under intense sun and heat. It began at the doors of the church in La Gloria, up the avenue of Las Aves, to the primary school Julio Sauri Espinosa, and by the Habitat Plaza, and back to the same church via prolongacion Rueda Medina, and it ended around 11:30am.
The second representation began at 12:30 at the Guadalupe Chapel in Colonia Salinas, which involved fewer people, which may have been associated with the threat of rain, which began about a half hour later. Dozens of parishioners were driven away by the rain, especially those with young children or babes in arms, but the reenactment continued to the downtown area.


Tragic Friday in Isla Mujeres when a Mexican tourist drowned at Playa Norte. Security was increased at the beaches. Authorities are considering the possibility of a heart attack in the death of the tourist from Jalisco

The state Attorney General ( La Procuraduría de Justicia del Estado de Quintana Roo) has not ruled out the possibility that tourist  Omar Alejandro Hernández Arriero, 34, who passed away this morning (Friday) at one of the calmest beaches in Isla Mujeres, may have had a cardiac event that caused this fatal outcome. He was with Tonalí David Ibáñez, who is also from Guadalajara, Jalisco, near the hotel Mia (formerly Avalon Reef), when Hernandez suddenly needed help, and began to drown, although the water is not deep in that area. Drover pulled his body to shore, and tourists who knew first aid tried to resuscitate him, but to no avail. His body was taken by taxi to the hospital, where he was pronounced dead. The doctors said he arrived without vital signs, and there was nothing they could do for the young man. His body was taken to the Medical Examiners in Cancun for an autopsy, and the cause of death should be known tomorrow.

Increased security at the beaches

The facility, which was built with an investment of 33 million pesos, is expected to be complete on May 15. It is expected to to be inaugurated by the governor.  They are still working on details of the parking lot, and upon a tour of the facility it was noted that there are lights, showers, and waiting rooms, among other things. It is located on Rueda Medina avenue, at the heart of this island, and is one of the best maritime passenger terminals in the country. This information was given by the director  general of the Port Authority, Administración Portuaria Integral de Quintana Roo, Erce Barrón Barrera.

Neighbors are complaining about the proliferation of flies at the Trash Transfer facility, which is caused by the accumulated trash. The trash is being removed to the mainland, but there is a daily output on the island of 35 to 40 tonnes.
Leer más...
Share
Pilgrimage for the love of Jesus Christ

Due to increased demand from the influx of visitors for the Easter holidays, the ferry from Punta Sam has added three additional crossings to its schedule. The first one is from Isla Mujeres to Punta Sam at 89am, and the second leaves at 11:45, and the last is at 8pm. On Sunday the extra crossings are at 7am, 10am, and 6pm. Many tourists cross with their cars, and these are also the cheapest tickets available for passengers.

Sábado 19 de Abril de 2014 06:51 Jesús Molina DIARIO RESPUESTA
The boat "Alberto" had come from Puerto Juarez with domestic tourists on board, and had anchored at the beach "Playa Tiburon", when tourist Verónica Garduño, 37, from the state of Mexico, suffered a cut to her right forearm from broken glass at 4pm. A call was made to Red Cross, and the Harbor Master came to inspect the boat to assure it has all the required equipment. The incident was a brief 'susto' (scare) for the tourists, who continued to enjoy themselves once the woman had received medical attention.

Increased security at beach after death of tourist