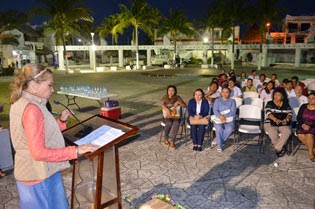 A documentary film about violence against women was shown yesterday afternoon by the municipal DIF, and the event was chaired by Marthy Vargas Magana. The director of the Quintana Roo Women's Institute (IQM) visited, and coordinated with the Isla Mujeres Women's Institute (IMM), in a campaign for the prevention of osteoporosis.  Yuseli Lopez, IMM director, walked the streets inviting island women to visit the Center for Victims of Violence on Friday, April 11 where studies for the detection of osteoporosis will be available for 50pesos from 9am to 4pm. The Center offers services for women who have suffered abuse including psychological support, medical assistance and legal advice. 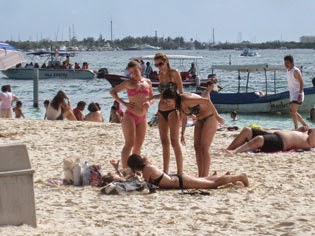 The hotels are expected to be full, and a huge influx of visitors is expected, mostly of Mexican origin, said the municipal director of Tourism, Gustavo Rodriguez Orozco. He added that this is one of the best holiday periods economically for Isla Mujeres because these visitors make use of almost the available services.
He said the real challenge of the Department of Tourism regarding hotel occupancy is not during the holiday periods,but in low season, for which strategies have been being prepared with the   Oficina de Visitantes y Convenciones (OVC) to improve demand during September, October, and part of November. With these new strategies, to be developed during the Tianguis Turístico de Cancún, occupancy during low season is expected to reach between 60 and 80 percent, said Sr. Rodriguez Orozco.
In conclusion, the Director of Tourism said they have conducted a series of meeting between the various agencies to implement a major operation to ensure the safety of tourists during this holiday period.
Bonus for police after completing classes in English

ISLA MUJERES, 10 de abril.-
Leer más...
The 12 officers who completed training in the English language received acknowledgement at a ceremony held in the City Council room, where the mayor announced they will receive a bonus, paid on they next fortnight's paycheck. The Mayor noted that North Beach was recently ranked #10 in the world and number one in Mexico in terms of beauty and views, and it is a priority  to be consistent and on par with this distinction, therefore it is important to have bilingual police who are willing to help visitors from other countries. The training began months ago, and thanks were given to the altruistic group Volunquest, representy by Kristen Tywan, and to the Center for Worker's Training (CECATI).  The officer's who completed the basic course in English are:  Ivett Alvarado López, Rosa María Alvarado López, Ana Mauri Caamal Bolívar, Yesenia de los Angeles Avila Leal, Marco Antonio Dzul Rodríguez, Martín Vladimir Flores Amezcua, Yonathan Maytorena Galeana, Luis Armando Moreno Barredo, Darvi Amado Ordóñez Avilés, Marco Antonio Velázquez Roblero, José Alfredo Collí González and Llimmy Ulises Trujillo Rejón.