ISLA MUJERES, 10 de junio.-
Leer más..Full article at this link.
Municipal president, Juan Carrillo Soberanis, and the Federal Secretary of Tourism, Enrique de la Madrid Cordero, had a productive meeting. The Mayor said it is important to maintain a close relationship between the municipalities and the agencies of the Federal Government in order to promote projects and manage resources that contribute to the welfare of citizens. As vice president of Island Municipalities, the Mayor was received by the senior official in Mexico City, along with a large delegation of Mayors belonging to the National Federation of Municipalities of Mexico (Fenamm) to discuss various issues.
He said that it is vital to maintain a close relationship with the Departments of the Federal Government, to manage resources and benefits for our municipality, and he concluded "We are committed to continuing to work in coordination with all federal agencies, to improve the economy and the quality of life of the islanders."

The only new article is about the mainland part of the municipality.

(Here's the image on the CONAGUA site at 10:30a today, the sun is shining) 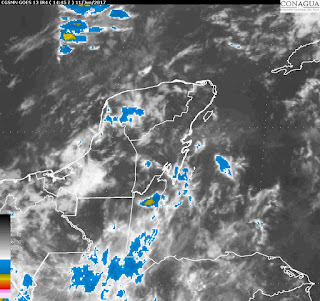 It is noted that the railings of the walkways along the cliffs at Punta Sur are in need of replacement because their ends are deteriorating, causing weakening and a potential risk to the many tourists who frequent the area.   Although the fence has been reinforced, it is advisedable that it be renovated for security reasons before it causes regrettable consequences, according a tourist guide who frequents the area with groups of customers. Tourists visit the ruins of the temple to Ixchel and the sculpture park, for a fee of 30 pesos for national tourists and $3 dollars for foreigners.


Junk removal campaign in process
Descacharrización en marcha .. [+] Ver masFull article at this link
The junk removal campaign that has been taking place on the island has been extended to the mainland, removing seven tons of junk from various colonias in that part of the municipality, under the personal supervision of the Mayor. There was good coordination by the neighborhood committees and good cooperation from the residents.

Turtles mating at Punta Sur
Apareamiento de tortugas en Punta Sur . [+] Ver masFull article at this link
A dozen or so sea turtles mating ~200 meters from the cliffs of Punta Sur can be seen by the hundreds of tourists visiting daily, even though they lack binoculars to watch them closely. It is now breeding season, and some people have started promoting this spectacle of the Green turtles (called Blanca in Spanish), and carrying binoculars. (Loggerheads and Hawksbills also nest on the island coasts, but Greens are, by far, the majority.)
It is not longer done, but until the previous decade, staff from the National Fishing Institute (INP) set up nets to catch breeding females for study at the island's Facility for Investigation. Part of that building is now the Tortugranja and aquarium, managed by the municipality, by agreement with SEMARNAT.
The fishermen say there are many sea turtles now, due to the level of recovery of the species as a result of a national program that takes place along the entire Mexican coastline, and some have suggested that a quota could be set. One of the promoters of this idea was former mayor Ariel Magaña “El Picho”, who is now deceased. However the suggestion was unsuccessful, and on the contrary, fines remain in force which are applied to those who capture turtles to kill them.
During the 1960's and 70's, Isla Mujeres exported turtles in large volumes, along with sponges, lobster, and fish, which continued into the 90's, when the well known packing plant, empacadora Romero, closed, which is in ruins today.
It is thought that most of the turtles mating off the south end of the island were probably born on the island, since their eggs have been protected here since the 1960's. The record number collected and protected at the Tortugranja during one season is more than 150,000 eggs. The season began last month and will end in November.
~~~~~~~~~~~~~~~~~~~~~~~~~~~~~
This blog is brought to you by....