Lanrry Parra
ISLA MUJERES, 7 de enero.-.
Leer más...
The report for the island will be on Thursday evening at 6pm at the Convention Center (and for the mainland it will be at 10am at their Community Center.) The Mayors focus has been on the following points:  Improve the living conditions of the community, Ensure basic services for the people , Promoting the economy and jobs, Development with planning and respect for the environment , and Have a good government ( a citizen's government.) The Mayor's "Dialogues with the Community" program has allowed citizens to present their proposals about improving Isla Mujeres, which helped create the Municipal Development Plan.
Activities in these first 14 weeks include:


To improve the living conditions of each family, the administration has decided to renovate, modernize, and improve our municipality, and is putting programs in place for street patching, street light repairs, cleaning and maintaining the Public Spaces, as well as for overall cleaning and for improving trash collection with recycling programs.

Through the Civil Protection agency, monitoring programs have been implemented to prevent flooding during rains, to clean sewers, to change deteriorating drain covers, to clean the catchment pits, and the pumping system is 100 percent operational.

Regarding public works, the second phases were completed at Iguanas Park, and in Ciudad Mujeres on the mainland work was done on two parks (details in article).


Regarding the Mayor's commitment to create Tourist Police, English language classes are currently being taught to officers.


Regarding the education of children, which is very important to every family, packages of school supplies were given to 1630 students, with the help of the state government. Also, the process of providing scholarships for ferry crossings was initiated with the intention of decreasing drop outs and supporting family economies.


Regarding health, the Hyperbaric Chamber has been returned to operation giving families of seamen a sense of peace. To prevent dengue, there are regular fumigations by brigades. Federal life insurance benefits were obtained for single mothers.


For youths and families, the program of Youth Power has been giving space and attention, and they will soon have a computer room and conference room, with areas for reading, recreation, and training workshops. 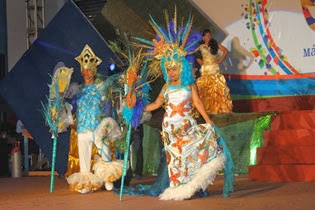 Lanrry PARRA
ISLA MUJERES, 7 de enero.- e.
Leer más...
Registration to participate will close on Friday, January 10th for those who wish to participate in the contests to choose kings and queens for Carnaval in the adult and children's categories. In the case of the female Queen, (but not the King) she must be of legal age, single, and an islander and/or a resident of the Island. To be King, he must be an adult and an islander or resident. The adult competition will take place on February 1st at a time and place to be announced. The final results will be held on February 15th, at a time and place to be announced.
For the children, parents or guardians must sign and each troupe should be led by a girl and boy pair who will be candidates for the children's King and Queen competition for Carnaval, whose place and time will be announced.

Crossings of vehicle ferry suspended due to strong winds
13 hours ago
http://bit.ly/TVISLA-Ferry1

After Hurricane Wilma in 2005, large amounts of North Beach were lost, which have not been fully restored, and the beach suffered harsh punishment and loss of sand from the strong winds and waves of cold front #24, despite the breakwaters. On Monday night and much of Tuesday, there were gusts of winds reaching 70 km/hr which affected several palapas and rustic facilities used for tourists by hotels and restaurants.The waves rose to more than a meter in this part of the island, causing the loss of sand despite the 'whales' (breakwaters) which could not protect the beach where Playa Norte and the Posada beach converge, where the pier was nearly separated from the mainland, and the water was running side to side, said a security guard for one of the businesses.
More than one shade-palapa had its thatch damaged, and seawater invaded areas commonly used for access, as was the case of one access leading to the hotel on the islet of El Yunque. (That is the islet that the Avalon, now Mia Reef, is on). You could see water reaching the area of the Casa de las Rocas, of the late businessman Jose de Jesus Lima Gutierrez, who promoted tourism in Quintana Roo.
Some tourists were out to see the excitement and changes, but most did not leave their hotels to visit North Beach, but the lifeguards of Civil Protection were on duty. The agency reported they took care of some falling trees, and were taking precautions in the federal zone to warn people of potential danger at sites where there could be a risk to human life.
On Monday night there were several brief outages due to the winds, but service was restored within seconds. The port has remained closed to minor navigation since Sunday night with updated restrictions during the passage of the main force of the storm.

Absenteeism rose as high as 80 percent on Tuesday morning among preschoolers, whose parents kept them home from school to avoid health problems when the temperatures dropped, and cold winds blew across the island Monday night. On Tuesday afternoon temperatures were in the vicinity of 22 degrees (~72F). There was also absenteeism among primary and secondary students, as well as in the business sector. The ferry schedule remained the same for students who wished to cross to Cancun for their studies. The winds and cooler temperatures were the result of Cold Front #24.

Young Jesús Gamboa Ríos is an art teacher at the Middle School who recently joined the faculty, who was interviewed while he was at City Hall running an errand. He said there is great potential among the young people to work in the fields of music, dance, theater, and visual arts.He said the official proposal to extend the school day would bring advantages to the students.
He is working with performing groups to strengthen programs and work with the municipality for commemorative event performances. There is a plan to form an internal committee to develop a Carnaval activity in March, with details to be worked out later this month.

The King's Day Gift giveaway by the DIF has been rescheduled for Saturday ~5:30 at the La Gloria dome, and Barlito's is still the drop off location. Boys toys are needed and the response has been excellent!