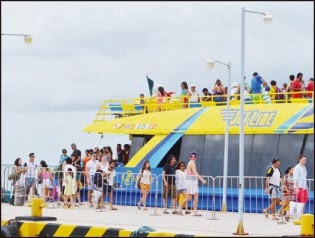 Lanrry PARRA
ISLA MUJERES, 2 de enero.-
Leer más...
The Director of Tourism says that expectations of hoteliers of all categories of hotels were met during the year end holidays in Isla Mujeres. Occupancy was at 99-100% on the last two days of December, with the usual decline on January first, when occupancy was ~90%.  The Tourism Director anticipates that occupancy will remain between 85 and 95 percent for the first three months of 2014. It is noted that of the 2569 rooms available in the municipality of Isla Mujeres, 1563 are on the island and 1006 are in the Continental Zone. 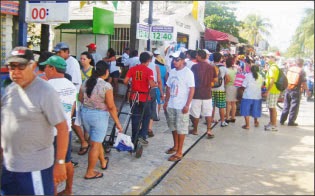 Lanrry PARRA
ISLA MUJERES, 2 de enero.-
Leer más...
The Police Chief reports that there were no major incidents during the New Year's celebrations, as a result of the operations which included patrols, checkpoints, breathalyzer, and tourist information modules. He said there were no major incidents in recent days, just the arrest of 20 people for disorderly conduct, and the taking of motorcycles and golf carts to the impound yard (~60 vehicles were impounded according to another article), for drivers who were consuming alcohol. The Police Chief, Joaquín Poot Acosta, said this detention of vehicles was like social work to prevent the drivers from continuing to drive, which could cause an accident. They were able to recover their vehicles without any complications. (As I explained in response to a comment yesterday, the drivers were not detained, only the vehicles).
The operations between December 31 and January 2 included use of the breathalyzer on the morning of January 1 and constant vigilance on the road to Punta Sur, where the people gathered to receive the first rays of the sun of 2014.
It is noted that during this holiday season a tourist service module was put into operation as a part of the "Tourist Police" program of the current administration of Agapito Magana Sanchez. Located on the Town Square, the Tourist Police module provides attention 24 hours per day, offering general information about the destination, and taking reports from visitors, in order to provide a prompt response. This was initiated by the Mayor to give better service to tourists during this vacation season.
According to the Municipal Department of Tourism, occupancy was at 99% during the last days of the year.

The cost of 500 ml (16oz) Coca-Cola rose from 8 pesos to 13 pesos in more than one store. (~A  forty cent increase, from ~65c to  ~$1.05). The manager at Súper Wilis confirmed that the cost of 2.5 liters of Coca Cola rose from 23 pesos to 29 pesos, due to the passage of the Federal Revenue Act of 2014. (~$1.90 to ~$2.40, a fifty cent increase).
Alberto "Rulo" Castro, who sells jewelry, commented,  "The increase in the daily minimum wage of just over two pesos is a mockery with this brutal, unparalleled rise in the prices of food and beverages, leaving the consumer in a defenseless state."
Ex legislator Hugo Ravell regrets that the federal legislators failed to calculate the size of the problem and the impact it will have on the budgets of poor people.
The reporter visited a tortilleria, where they said the prices are not expected to rise, because cornmeal (masa) is not taxed. But the increase could be 'latent' because of the increase of costs upon which they depend, such as transport costs, light, and fuel. The increase in the cargo ferry fees in September did not cause raising of prices of the basic staples, but the next increase could generate strong pressure because the millers work at a small margin of profit.
Those who were interviewed say the return of a PROFECO office to the island is indispensable to provide a means to prevent abuse of consumers. (That is the federal Consumer Protection Agency).

The Magana ferry and the cargo-vehicle ferry (Transportes Marítimos Magaña and Marítima Isla Mujeres) plan to maintain their rates for now, while they analyze the impact of the rising tax rates. The cargo ferry from Punta Sam will continue selling a one way ticket for 35 pesos to residents and 38 pesos for tourists. The vehicle rates also remain the same (and are given in the article), and are as authorized by the SCT. There is a ten percent discount for resident vehicles.
The Magana rate remains at 35 pesos for local frequent users, and 65 pesos for the general public, which is less than the amount authorized by the SCT. (Secretary of Communications and Transport).
It is noted that Ultramar has 80% of the market and is applying an increase since the increase in the VAT tax went into effect on January 1st.

This has the same information as previously translated, with the addition of a comment that PE thinks the Tourist Police module is playing a role that belongs to the Tourism Department. 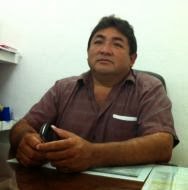 The Civil Protection Department is planning to build two life guard towers to service Playa Norte and Media Luna beaches, and expect to rehabilitate an unused tower at the Posada del Mar beach. The plan is expected to take effect by the middle of this month to provide security to thousands of swimmers who will be arriving to these areas. Three towers fell with the passage of Hurricane WIlma in October, 2005, and they have not been rebuilt. The areas  where there are strong currents and people have drowned since the 90's,  are the confluence of Playa Norte and Posada del Mar beaches, and the Media Luna beach.
It was told in this paper a few days ago how the lifeguards who walk the beaches run the risk of not realizing in time that swimmers are in danger, who have left the areas of the buoys . Thanks to cooperation between security officers and staff of nearby businesses, triangular warning signs have been posted. There is currently a lack of buoys at Playa Norte and it is under the joint authority of the Civil Protection or the Harbor Master of the Port Authority (ApiQRoo) to renew those buoys.

Just wanted to thank all those who participated & attended the January Artist Fair. The afternoon weather was iffy with overcast skies & a light drizzle but by 4:15 pm, the weather held & we had a very successful Fair. We did lose about seven local artists for fear that it might get worse. It is hard for the locals to justify cab fare if they get to the square & we have to postpone or cancel the Fair.

Our current, Presidente Agapito (Mayor) & his cabinet attended the Fair. I walked Agapito around to meet the participants. He is was especially interested in meeting Alison Sawyer Current of Isla Animals. In his town meeting across the Island, reproduction of unwanted dogs have been brought up as big concern. Next week, I am meeting with Kristen Tywan, a municipal representative to figure out how the current administration can assist Alison with Isla Animals & the spay & neuter clinics. This is huge!!

We also had SpongeBob & Spiderman at the event meeting, greeting & posing for pictures with all the local & visiting kids on holiday vacation. They were a huge hit. I can not thank Denise & Mike (long time foreign residents for their acting capabilities!). It is a hot job that brought so many huge smiles on the faces of the little ones on the Island. And another thank you to Lawrie & Lynda for contributing their awesome Halloween costumes for the event.

We had another month of incredible talent. The food tamales, bbq sandwiches, ceviche & sweets all sold out. The artists had so much local & visiting support. I just can not thank you all enough for coming down to celebrate art & our local community. This means so much to our community. We hope to see some of you on February 6th for the next Artist Fair! Cheers to a happy & healthy new year!
~~~~~~~~~~~~~~~~~~~~~~~~~~~~~~~~~~

Oscar and Paola, what a great dinner I had last night at Greenverde. Your yellow mole is the BEST on the island, and maybe the best i've ever had, anywhere! thank you
Betsy Snider

Really excellent dinner tonight at Greenverde. Highly recommend it and the homemade green corn chips and homemade tortillas are wonderful.

From the back door/stairway of The Upstairs Room at MVC B&B...(it faces both directions & has a front view & balcony also)

A NORTE heading our way, no Sunset Sail today.....