..This is the live webcam at North Beach / Playa Norte 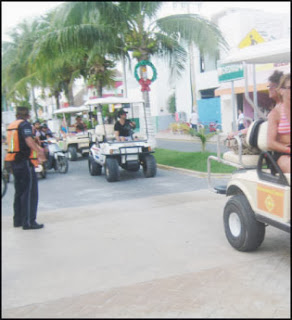 Lanrry PARRA
ISLA MUJERES, 1 de enero.-
Leer más...
On January first, the demand for golf carts exceeded the supply, and the agencies on the main street, Rueda Medina, were sold out by noon, and about an hour later there were no golf carts available for rent throughout the island. This generated some discontent among tourists, but in the end everything was controlled with a few explanations. At one point some rental houses even had lines, ("as though people were buying tortillas"), of people who were waiting for a cart to return that had been rented early in the morning. Some tourists, who did not want to wait, chose to rent scooters, and accomplished the same objective, which was to tour the periphery of Isla Mujeres. Around five in the afternoon, everything began to return to normal, as the carts returned to the agencies. 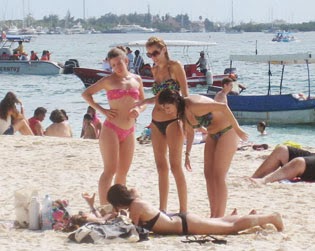 There was an invasion of sunbathers, and their families and friends, to the beaches of Isla Mujeres, which were crowded on the first day of the year. There were hundreds of families and swimmers, of all nationalities, on the beaches of Playa Norte, Posada del Mar, and El Riíto,  which total about three kilometers. There was virtually no room to sit or lie down due to the large number of visitors, who were not inhibited by the threat of rain or the slight decrease in temperature. It was not until after six that the beach began to clear, and hundreds, if not thousands of daytrippers prepared to take the ferries back to Cancun, or their places of origin.
The people who work on the beach said this was on of the best days they have had, compared to the past year. 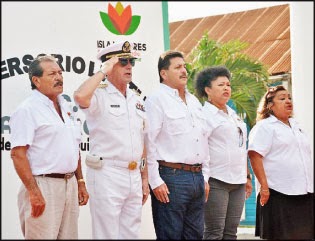 Lanrry PARRA
ISLA MUJERES, 1 de enero.-
Leer más...
Javier Rojo Gómez was Governor of the Territory of Quintana Roo from June 2, 1967 until December 31, 1970, when he died, and therefore on the 31st, his death was commemorated. He promoted the installation of electricity & potable water in Isla Mujeres (and Puerto Juarez), which occurred under his administration and the construction of major piers (in Puerto Juarez and another port), and the construction of the Cancun-Tulum and Chetumal-Escarcega roads, as well as improving communication between Isla Mujeres and Cozumel. The downtown mercado bears his name. He worked to ensure that Q Roo would become among the most prominent and most prosperous destinations in the country. (He was Governor when it was decided to develop this region for tourism, when less than 200 people lived around Puerto Juarez, and Cancun was jungle & dunes.)

Receiving the first rays of the sun in 2014

Jueves 02 de Enero de 2014 13:45 Jesús Molina DIARIO RESPUESTA
Island families and tourists gathered at the South Point of the island for sunrise, to observe the rays touching Mexico for the first time in 2014, near the former ceremonial center of the Maya, who erected a temple to their goddess Ixchel upon the cliff. The people wished each other a good New Year, took photos, and embraced when the sun rose at 6:30. It is noted that the it was a "hit" with the people that the City opened the bathrooms, and offered a cochinita taco to each of the attendees. This gathering to watch the sunrise is a traditional event, and Isla Mujeres is the most easterly point of Mexico, where the rays touch the country first.

Jueves 02 de Enero de 2014 13:45 Jesús Molina DIARIO RESPUESTA
.There were no incidents to mar the New Year holidays, with a total of eight arrests for administrative offenses and the detention of sixty vehicles, for the good of the community. The eight who welcomed 2014 in jail cells were arrested for excess alcohol in their systems, and the large number of impounded vehicles were held because their drivers were under the influence of alcohol, and the majority were teenagers. The checkpoints were effective in prevention since all the vehicles were detained due to drunken drivers.
Leer más...
Share
Tourists throng to the island 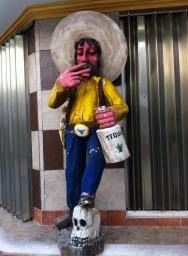 The officials were unusually tolerant and the live music of the New Year's party continued after nine in the morning. There were no incidents at the celebration, which ended shortly before 10am, when the street cleaners began clearing the area. The table and chairs were still in the way of the tourists and families at noon.
There were no babies born as the New Year arrived, and the closest was the baby of the family Rosado, whose mother went to the hospital at 5pm on Tuesday, and the 3.15 kilo bebita arrived at noon on Wednesday. The police reported they made 12 administrative arrests, and it is noted that the Public Ministry was closed.
During the festival, there were complaints from residents about children, youths, and adults with firecrackers and fireworks, which continued into the wee hours of the morning, with the various pyrotechnic toys causing concern from others. Juan Sánchez Uc complained about officials who are tolerant of businesses who sell these items, calling it corruption.
There was an outdoor Mass at 5:30am by Raúl Sánchez Alonso at the South Point, where there was a gathering of hundreds of believers and non-believers in God to welcome the first sunrise of 2014 amid a general 'algarabía' (joyful uproar).

On New Year's Day, the first crossing of the ferry was suspended, and stores did not open early, with some remaining closed for the holiday and others opening at 9am. As the hours passed, the number of arrivals increased and there were entire families on the ferry coming from Punta Sam, which added two extra crossings. The other ferries were operating at full capacity also.
Preliminary data from the Port Authority indicates a record breaking number of arrivals again this year at 1,612,955 passengers.
The municipal Tourism Director admitted there are problems that need to be corrected, referring to the harassment of tourists by boater and commissionistas at the docks. The Tourism Director responded on the social networks saying "We will treat them as tho this is their home," and noted the municipality has a commitment to boost tourism in the new year.

Although there have been no formal complaints from the neighbors in the colonia of Caridad de Cobre, Juana Perez says the rules and regulations should be applied and the boat owners who are parking their boats in the streets and doing maintenance on them should be punished, because the noise and chemicals affect the neighbors. She says they are organizing and planning to take a letter of complaint to the authorities. It is noted that two of the streets in the colonia have one or more boats parked for maintenance, and there is a  lot with boats awaiting attention also.
As a background, it is noted that ten years ago an attempt was made to relocate the welders and carpenters of these open air workshops to the southern part of the island, near the hurricane shelter. Por Esto says most of these workmen are are still operating in different parts of the neighborhood, and claims the land set aside for by the government came under the control of people of influence and politicians, noting one of them is the controversial Eduardo "Wato" Peniche. (whom PE does not seem to support.)

This road hazard has been in the news repeatedly, and apparently complaints about it continue, and it is noted that it will be bad for the image of the town if a tourist gets injured. This is located on the north side of Rueda Medina, near the light house, and was caused by the CFE, Electrical Commission a few months ago.
The Public Works Department is unsuccessfully trying to force the construction company of the malecon south of the Naval Base to install certified manhole covers and to finish the sidewalk. There are areas where pedestrians must take care when coming from the Punta Sam ferry, because the sidewalk is uneven, and many have tripped or fallen.

The hotels are full, but the boatmen are not similarly busy, although there are other times of the year when they cannot meet the demand.
The number of vessels had grown exponentially in recent years, according to some of the veteran sailors, with over 100 boats in the port area dedicated to tours of scenic Isla Mujeres bay,  the west coast of the island,  and the coral reefs, including around el Farito where it is shallow and accessible to inexperienced swimmers.
Another problem is that tourists prefer to use golf carts to get around the island. Now officials say there are more than 400 carts for rent on the island. 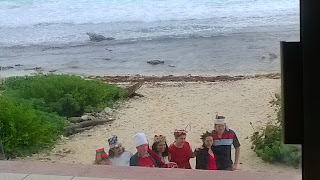 We went down to North Beach on Christmas Day...this is near Buho's 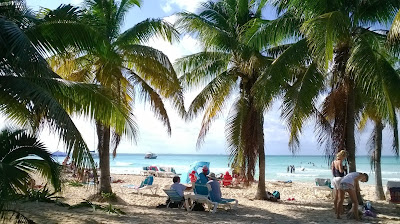 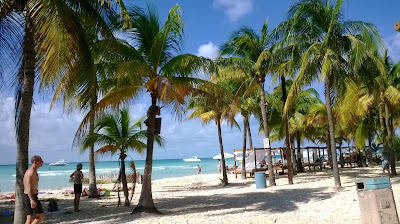 A mini-rainbow on the eve of  New Year's Eve, in the afternoon (The sun is always behind you when you see a rainbow) 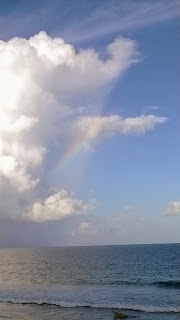 The first sunrise of 2014 from MVC B&B ..looking southward 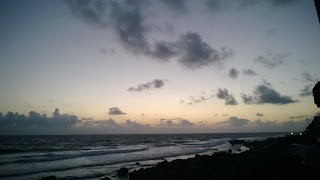 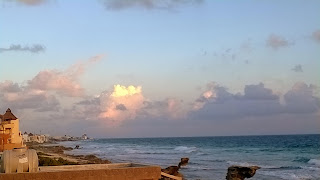 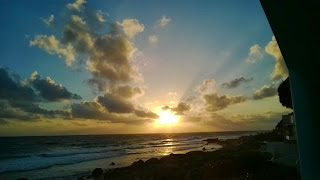 Photos by Bruce...
A mini rainbow on the eve of New Year's Eve in the morning 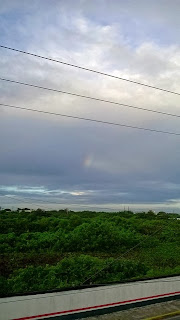 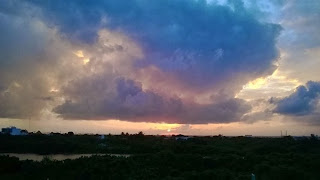 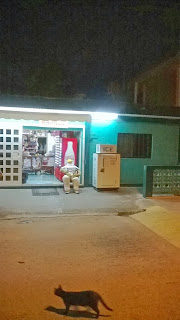 We shoulda taken photos of the Flamenco dancers on the 26th at Iguana's, but we were too busy enjoying them. A Really Excellent Evening!!

Sunrise on Isla from my morning run.