Despite reduced temperatures: Their presence is evident in the stores & at the beaches 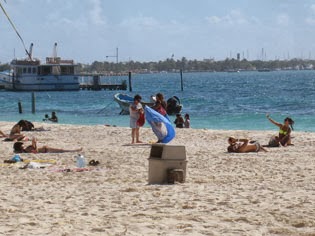 Tourists of all nationalities were enjoying the beaches, as well as the stores and restaurants, despite recent temperatures of 18-20 degrees (C). It is noted that for domestic tourists, temperatures are lower in their home states, and visitors from abroad are escaping snow and ice. Activity on Hidalgo began at 9am with shoppers seeking souvenirs, and from  six pm and 11pm the restaurants were popular. Despite the massive presence of visitors, restaurant and bar owners complained that the situation could be better and they are hoping for improvement in upcoming weeks.

Increasing consumption of marijuana by youths 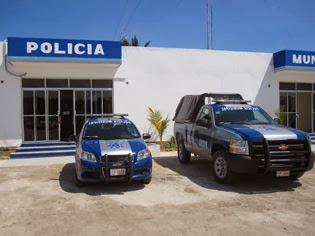 Lanrry PARRA
ISLA MUJERES, 18 de enero.-
Leer más...
So far this year there have been three occasions when minors were arrested in possession of marijuana, and one was in possession of eye drops to reduce redness. In the past two arrests, one was a group of five youths and in the other case, there were seven youths.
The police chief explained that when minors are detained, they are channeled to the municipal DIF to the Office of Child Advocacy (la Procuraduría de la Defensa del Menor) who involve the parents, while informing them of the situation and its dangers. Often both the youths and parents receive psychological counseling, and the youngsters also do community work. It is noted that there are a group of youths who gather behind the municipal market "Audomaro Magana" in colonia  El Cañotal to consume and sell this dried herb. 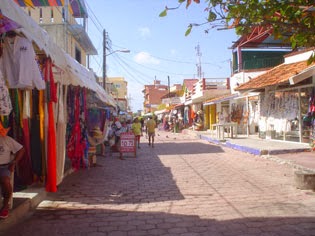 Lanrry PARRA
ISLA MUJERES, 18 de enero.-
Leer más...
On Monday, January 20, at the Town Hall there will be a meeting to explain issues associated with the new tax reform laws, beginning at 10am and sponsored by the Chamber of Commerce, whose members will be given priority with seating. About 100 members are expected to attend. 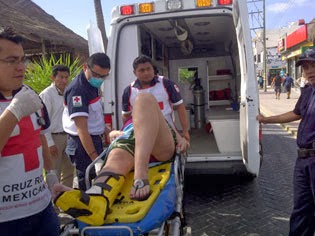 Lanrry PARRA
ISLA MUJERES, 16 de enero.-
Leer más...
Due to irregularities in the sidewalks, a foreign tourist sprained her right ankle and was taken by the Red Cross to the General Hospital. Tourism workers say this is not the first time a tourist has fallen, because there are irregularities and obstacles. Near the construction of the passenger terminal, visitors must walk on the asphalt. The accident occurred at 1:30pm 'today' (Thursday) on Rueda Medina Avenue, which is the main street, where there are hundreds of visitors daily. 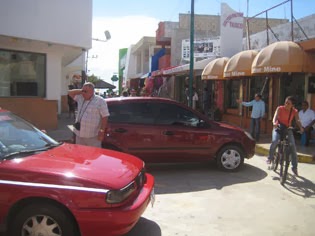 ISLA MUJERES, 16 de enero.-
Leer más...
Downtown merchants say they hear complaints every day from foreigners who dislike the practice of drivers who will block the street rather than walk a couple of blocks. The owner of a silver store near the bank said this is common problem there and obstructs the passage of pedestrians. It is noted that inconsiderate attitudes can have a negative effect on tourism. 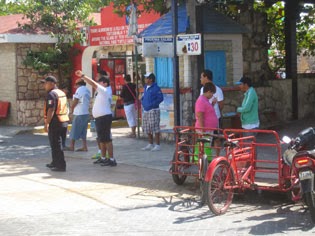 ISLA MUJERES, 16 de enero.-
Leer más...
The Director of Tourism is proposing that the members of the five Cooperatives of Tourism Service Providers have one space where they sell their services and products, in an orderly fashion, at the ferry terminals. There would be a schedule determined for the different days of the week. This has already been approved by the General Secretary of the City, and awaits discussion with representatives of the Port Authority.

No increase in respiratory diseases in Isla Mujeres

Quintana Roo will receive 10,000  "Pan sin Hambre" cards to be distributed among the municipalities according to need.   In addition, with these pre paid cards, families receive other benefits, giving them access to food programs, such as those that allow them to purchase products of DICONSA.
During his visit to Isla Mujeres, the Secretary of Health said they are working closely with the mayor with social assistance programs that can benefit the municipality of Isla Mujeres. Last year only 250,000 pesos were invested in the Temporary Employment Program here, and they are seeking to increase that amount. They are working to increase the number of local beneficiaries to the Oportunidades program. There are other programs providing direct benefits to families of Isla Mujeres which include “65 y más” and“Seguro a jefas de familia”  (65 and older, and Insurance for Single mothers).

Domingo 19 de Enero de 2014 15:16 Redacción DIARIO RESPUESTA
Preparations are underway for the tournament which will be held February 14th & 15th, and is open to anyone interested in joining. Members of the five fishing cooperatives will be participating, and there will be representatives involved from the following agencies: Comisión Nacional de Areas Naturales Protegidas (Conanp), el CRIP and la Sagarpa. The Director of the Municipal Fishing Agency noted that precautions must be taken when handling the fish due to toxins on their outer spines, but once they are dead they become harmless to health.

Domingo 19 de Enero de 2014 15:15 Jesús Molina DIARIO RESPUESTA
Sandra Avila called the newspaper to report that there is a post in colonia La Gloria, near the Las Tortugas park that is about to fall, because it was hit by a truck five days ago. The reporter visited the site and verified that the post is fragmented and could be blown down by a strong wind. It is noted that this is near a playground, and that the hazard is increased because the area lacks good lighting.
Leer más...
Share
From Friday...

Athletes exercise on the path around the salty lake (Salina Grande) in colonia la Gloria, and families bring their young children there to play. Enrique Sanchez, who exercises there regularly, asked the reporter to listen to his complaint and to come witness all the trash that people have thrown into the salina. This includes chairs, coolers, and all kinds of garbage, and it is requested that authorities clean up this recreational area. The reporter found that the salina is polluted by trash, and noted that it has a fragile ecosystem, and serves as a refuge for migratory birds.

Since the chamber was put into operation, it has been used to treat eight fishermen who suffered from decompression symptoms while diving in search of lobster. Nearly all were discharged after three or four sessions, with the exception of one who has received seven treatments and still needs more, in order to have a good outcome.
The fee is currently 300 pesos monthly and will not be raised before the end of February. (The ban on lobster fishing begins March 1st.) A minimum treatment, of two hours, costs 2000 pesos, while the price can be 4500 pesos for a session of four or five hours, for those who are not enrolled.
There will be a meeting of the Board of Trustees at the end of February, when the revenues and expenditures will be reported and it will be determined if the chamber can continue to operate with a fee of 300 pesos, but it is likely to increase by fifty pesos monthly. This is not intended to hurt the wallets of the fishermen, and the fee helps provide proper maintenance and purchases of needed parts, so they can offer equal or better service to the lobster fishermen next season.

Islanders were cold on Saturday morning and overnight when the temperature dropped to 18 C (~65F), but it rose to 25 C (77F), and there were many sunbathers enjoying the beaches. Cold front 28 is moving across the eastern part of the Gulf of Mexico and there is a possibility of a port closure on Sunday or Monday due to winds from the northeast.

The ban on lobster fishing begins on March 1st and the fishermen are concerned that this administration will not continue the municipal support program begun by the last mayor. Unnamed fishermen complain about increasing costs of fuel and say that everything is more expensive since the increase in the VAT. They also complain that often the Seguro Popular does not have their medicines available, which requires them to pay at pharmacies. They note that production of fish has decreased, and their incomes are greatly reduced during the ban on lobster fishing.

There has been a fifty percent increase in the cost of the medical examination for the health card required of restaurant workers, which went from 141 pesos to 211 pesos.

The municipal government is cooperating with nongovernmental organizations for an ongoing sterilization campaign, whose first event will be on February 9th at colonia Guadalupana from 9am until 5pm when they expect to sterilize about 50 cats and dogs. They will hold other clinics at other points around the island in the future.
There are complaints among members of the NGO regarding failure to prevent the spread of canine distemper, because of the removal of infected bodies to the trash transfer site, which causes a risk of dissemination of the disease to other dogs.
The Director of the municipal Ecology agency, Christina Medina, confirmed that a collaboration is being formed with the NGO organization to protect and care for the animals of the island via the diffusion of information about  animal regulations. 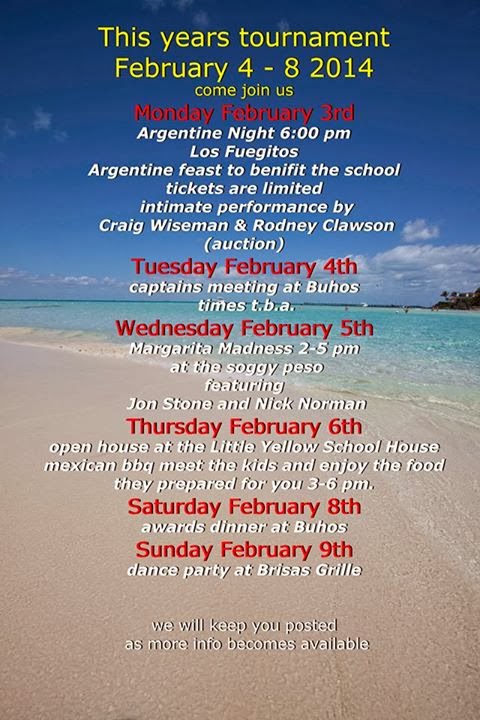 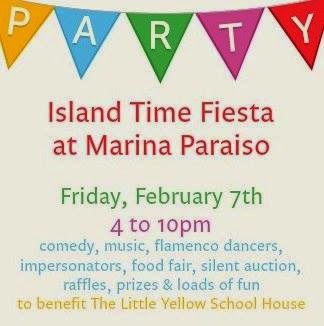