Help to the fishermen

Through the municipal Agency for the Fishing Industry, the City Council, led by the Mayor is reenforcing its commitment to this sector; on this occasion by offering information and advice about access to federal resources and by  improving their working conditions. The director of this agency, Humberto Moguel, has met with various members of the fishing cooperatives and announced that there are many programs that the fishermen could use, and they are working in a coordinated fashion to access these resources.
The agency will work as a liaison for funds that would be awarded directly to the cooperatives from the federal government from programs that offer productive work,  equipment, and infrastructure such as boats, motors, palapas, and docks.
On another subject, the director said they are preparing for the Lion Fish Tournament February 14 & 15, and enthusiastic participation by the islanders is expected. In December, there was a successful culinary event based on Lion Fish, and on that date the Mayor gave instructions to begin preparations to carry out this event.  Por Esto notes that there should be attractive prizes for the winners.

Warnings of gusts up to 50 km/hr with Cold Front 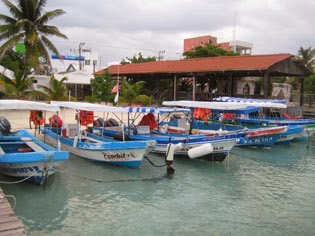 The Habor Master issued a general caution for navigation by all vessels, which is directed at providers of boat tours from Isla Mujeres and Puerto Juarez, as well as the fishermen and seafarers in general.  This was due to prevailing winds between 40 and 45 km/hr, gusting to 50 km/hr. The port authority added that the advisory could be maintained for at least a couple of days, and if appropriate the winds could cause the closing of the port to general navigation, depending on the intensity of the winds. (This occasionally affects some of the crossings of the car ferry, but generally it does not affect the Ultramar schedule.) He said this cold front is #26, with number 27 behind it, and it is not known what sort of winds #27 will bring to this area of Quintana Roo. Mariners are advised to exercise caution and tour providers to Isla Contoy must weigh the danger before setting out.

This morning, Dolphin Discovery company executives delivered just  over 30 multisport recreational balls made of closed cell foam, so they do not need an air pump and do not deflate, and are practically indestructible.

The head of the taxi union, Eduardo Peniche Rodriguez, is requesting that SINTRA verify the golf carts because he says there are several golf cart agencies that have increased their fleet. The taxi drivers say there are too many golf carts circulating around the isle, and many do not have plates, and some are not labeled, and they are creating unfair competition. The taxi leader points out that the cabbies are required to comply with the laws, but he says Coco Rentals has added ten more golf carts without proper documentation. He says Ciros has added fifteen, when there has been an agreement not to increase the number of carts in circulation on the island.  He says if SINTRA does not rein in these businesses, the taxi drivers will be very concerned about the effects on their income

The new passenger ferry terminal of Isla Mujeres is 85 percent complete, and is expected to be finished by the second half of February. The cost is over 33 million pesos, and it gives Isla Mujeres infrastructure that is cutting edge.  The construction was delayed by rains, and the 'obra negra' (obra means work) is done and now they are doing the finish work such as placing floors, ceilings, and fittings. There will be a formal opening ceremony when it is completed.
.
Leer más...
Share

The conference begins at 10am on January 20th at the City Hall between the Chamber of Commerce and its members to discuss the tax changes that began in this month, including the increased IVA, Value Added Tax. There is not extra seating, but others may attend on a standing room only basis. The business owners pay 300 pesos a month for the benefits of membership in the Chamber of Commerce.

With the arrival of Cold Front number 26 at mid day, the beaches began to empty, and later the port was closed to navigation by small boats. While Playa Norte emptied, a few tourists enjoyed the Posada beach which was more protected from from the winds. Boats from Cancun began to return there, although the wind was not very violent, with gusts at 30 km/hr, but a tendency to increase was forecast. On Thursday, gusts could exceed 50 km/hr, and due to the height of the tides, in the Yucatan canal waves could exceed four meters.(>13ft). This weather affects sales in Isla Mujeres, and merchants are concerned about decreased tourism activities this weekend.
As the effects of the front began to be felt, a waterspout was seen less than a mile south of the island, which was quite a sight for locals and tourists, whose photographs quickly flooded social networks.

The ambulance from the General Hospital is being used while the Red Cross ambulance has been out of service for several days due to mechanical problems. If the hospital ambulance also breaks down, Isla Mujeres will be left without these life saving services. The staff of the Red Cross have this problem on their agenda of discussions with the directors of the organization. This ambulance was obtained over five years ago and has suffered severe wear and tear while serving the tourists, especially in  times of high season, trying to provide service to support the citizenry.
It has only been three weeks since the  Red Cross ambulance last left the work shop, and there is a lack of funds to purchase parts and pay for costs. It is necessary for the municipal government to intervene and for businessmen to address the issue, interjected a former representative of the institution.