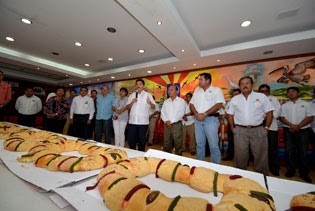 Lanrry PARRA
ISLA MUJERES, 6 de enero.-
Leer más...
The traditional cutting of the King's cake was led by the Mayor and the City Council with a large number of  City officials in attendance. In his speech the mayor expressed his best wishes for a new year full of successes and asked his colleagues to include improved service to the citizens of Isla Mujeres among their New Years resolutions. He also shared King's cake with state officials, including those of the General Hospital, thanking them for the hard work they do that benefits the citizens of Isla Mujeres, and he noted it was Nurses Day and thanked the women and men who provide this service daily.
The Mayor's wife, who is the honorary President of the DIF, also participated in Kings Day activities including the cutting of the cake at the Senior Citizen's club. She announced the start of "Friday Night Movies" for the seniors.

Prepare for increase in taxi rates 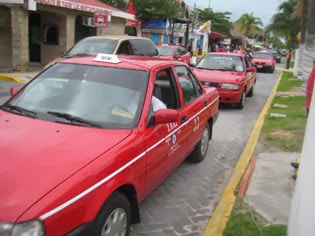 Lanrry PARRA
ISLA MUJERES, 6 de enero.-
Leer más...
The increase is estimated to begin in early to March and to increase the fares for residents by six percent, after two years of absorbing increasing costs without raising rates. The drivers do not charge a VAT, but they are affected by the increase when they purchase parts. The rate for local residents would increase from 13 to 14 pesos (This is an 8% increase.  13p + 8%= 14p vs 13p + 6%  = 13.8p.)
It has not been determined if the increase for tourists will be the same percentage, or if it will be closer to ten percent.

Better infrastructure for fishermen to improve their daily activities 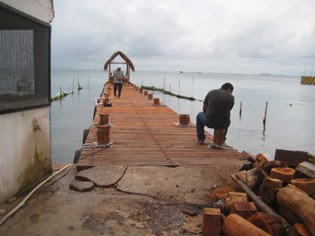 ISLA MUJERES, 6 de enero.-
Leer más...
The fishing cooperatives had a cordial meeting with  Q Roo SAGARPA representative Manuel Cardenas Magana last weekend to discuss the infrastructure needs of the cooperatives Caribe, Patria & Progreso, and Laugna Makax.
The President of the cooperative Caribe said they need a palapa at the end of their fishing pier. The president of the cooperative Patria & Progreso said their wooden pier of ~40 meters needs rehabilitation. The representative of Laguna Makax cooperative also wants their pier rehabilitated, which is smaller than the one just mentioned.
They were advised each cooperative will need to contribute 30 percent, and the federal and state governments will contribute 40 and 30 percent respectively. The SAGARPA representative expects to secure the funds for these projects in the next few months, because the process was begun last year.

The Harbor Master reports winds gusting up to 75km/hr due to cold front #24, with no incidents as of this moment. The port is closed to minor navigation, but the ferries (Ultramar, Magana, & the vehicle ferry) are operating normally.

Posted ~9p yesterday
Civil Protection reports some lamps fell in the area of the Caribbean Sea as a consequence of the strong winds this (yesterday) evening.

Poor start of the year for the fishermen

Empty beaches because of the cold front

The effects of cold front #24 had a negative impact on the local economy and more rain is expected, with the usual advice regarding the young and the old needing to be especially careful when the temperatures drop, to stay as warm and dry as possible.

The holiday period has ended for the domestic tourists who began returning to their places of origin this weekend, in anticipation of resuming normal activities on January 7th.
Leer más...
Share
Schools are ready for the return of more than 3000 students

There were no mishaps during the holiday period, when personnel from the Nautical School FIDENA assisted in supervision of the nautical tourism providers and assured that their vessels met the safety requirements. There were times when the tour boats were operating at 100% capacity, while many domestic tourists were visiting.
Leer más...
Share
Neighbors annoyed about the lack of trash collection

Residents of colonias Lol-beh, Caridad del Cobre, and Canotal say there are accumulations of trash in their areas, and a problem with neighbors who are not conscientious. They say empty lots accumulate brush and trash and are used by people getting high or drunk, and with winds and rains it gets worse and the trash gets into the street.  They complain that the trash truck does not often come into the interior streets, because it is difficult, so it goes to the outer streets.
Leer más...
Share
Hyperbaric chamber functioning under this Mayor

There have been six fishermen treated and stabilized since the hyperbaric chamber was put into operation by this administration. It is used to treat decompression illness and they are now treating someone with a diabetic foot problem, every eight days. They are offering this service to non members of the coops at a cost that is thirty percent lower than the cost in Cancun. They have treated four fishermen from the Makax cooperative, and one from the Isla Blanca. There are currently only two cooperatives associated with the chamber: Por Justicia Social and Makax. Isla Blanca has a contract with a chamber in Cancun, but when that ends they will be affiliated with this hyperbaric chamber.
Leer más...
Share

During the ceremonial cutting of the Kings cake celebrations, the Mayor asked his colleagues to redouble their efforts to provide tangible results. PE says this is amid growing public restlessness, upon completion of 100 days by this PRI administration, who returned after six years of PAN governance.  The mayor acknowledged shortcomings in the areas of urban cleanliness, lighting, security, and social services and called for further efforts and responsibility from his directors.

The seven year plan to improve downtown with road renovations & removal of overhead lines has not gone as planned. The plan from 2007 included renovations of Hidalgo, Juárez, Guerrero, López Mateos and the main street/. malecón Rueda Medina, as well as the adjacent streets  Bravo, Morelos, Madero, Abasolo, Matamoros and Carlos Lazo. The work was done on Hidalgo and Rueda Medina, except for the burial of the overhead lines.
The city budget includes funds of 3.8 million pesos for the monitoring, management, maintenance, and cleaning of the federal zone (ZOFEMAT), but has no resources from the  following programs: Tu Casa (housing), Habitat (housing), Rescuing Public Spaces, and the Metropolitan Fund.  It is noted there are sidewalks in need of repair.

Same info as the DQR article.

The tournament will take place on February 14 & 15 and will feature attractive prizes. This is an inter-agency effort to reduce the negative effects of this invasive species and to reduce its population. The agencies include the Comisión Nacional de Areas Naturales Protegidas (Conanp), the Secretaría de Medio Ambiente & Recursos Naturales (Semarnat); the Centro Regional de Investigaciones Pesqueras (CRIP), and others. There are many restaurants ready to feature the fish on their menus.

The King's Day Gift giveaway by the DIF has been rescheduled for Saturday ~5:30 at the La Gloria dome, and Barlito's is still the drop off location. Boys toys are needed and the response has been excellent!