Lack of permit for palapa construction 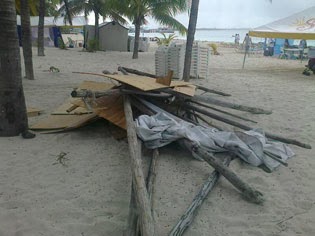 Workers with the municipal Public Services Department removed some lumber from the Posada del Mar beach, under orders from the General Secretary of the City. The workers said they were not aware of any sanctions against the person who wanted to build a palapa without permission. They took the materials to the City storehouse, where they expect it to be claimed by its owner. It is noted that municipal authorities should not permit anyone to erect a temporary flea market, which would be a bad image for tourism.
Lanrry PARRA
ISLA MUJERES, 5 de enero.-
Leer más... 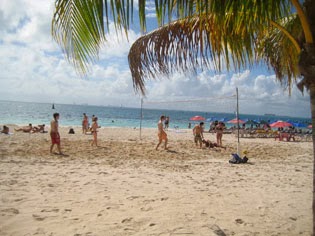 Progress in construction of  new hospital

To be ready in late March 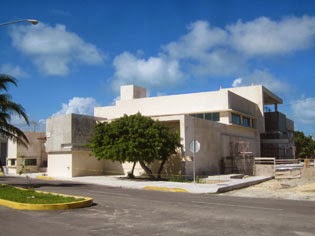 Lanrry PARRA
ISLA MUJERES, 5 de enero.- .
Leer más...
The new hospital is estimated to be about 90% complete, and is expected to be completed in late March or early April, and to be put into operation in May. There has been an investment of about 50 million pesos thus far, and the construction site is over three thousand square meters. 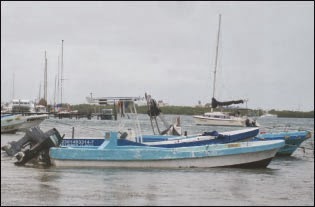 Lanrry PARRA
ISLA MUJERES, 4 de enero.-
Leer más...
Jan 4...For the second day the port was closed for navigation by boats under 23 feet in length, and according to the Port Authority there were about 200 fishermen, from the five cooperatives, who have been unable to go to sea for a few days. Thenautical tourism cooperatives were unable to go out in the inclement weather, and the businesses offering diving or fishing trips were also affected.

Opening a collection center for Christmas trees: For proper disposal 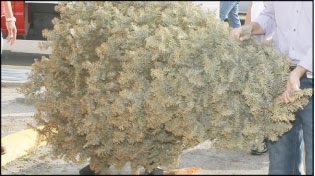 Lanrry PARRA
ISLA MUJERES, 4 de enero.-
Leer más...
There is a collection center for natural Christmas trees throughout the month of January at the Mundaca Hacienda from Monday-Friday 9am to 4pm, with no cost. They will be shredded into compost which will be used by the municipality or donated to people who request a 'cuadra'. People who have no way to transport their trees can to to the Civil Protection agency and provide information so they can come and pick it up. It is important not to dispose of these trees in public areas or roads because they are highly flammable.

Complaining about a lack of tourists

Domingo 05 de Enero de 2014 14:37 Jesús Molina DIARIO RESPUESTA
The staff of the municipal Civil Protection agency were cleaning storm drains to keep them functioning properly and they activated the pumps at the lakes of Salina Grande and Salina Chica, to maintain their low levels. They monitored Abasolo street downtown to prevent flooding. The beach areas were deserted during the rain, which affected nautical tourism also, and was due to Cold Front 23. On Monday, cold front #24 is expected to affect the Yucatan Peninsula, including Isla Mujeres, with potential for rain.

A resident in colonia Electrista, Rafael Burgos, is complaining about work being done by his old partner,  Leonel Povedano who constructed a three meter concrete box underground which will be connected to the wastewater system of Aguakan at the street 16th of September. Mr Povedano Moguel enlarged his business, and wants to efficiently remove residual water, and says everything in in order. Mr Burgos regrets the attitude of Mr Povedano, and says his construction is imposing into a public area, by several centimeters, at the edge of the basketball court. The director of Cadastre, Ivan Lugo Garrido, said he is not aware of any document allowing occupation of that part of the public space, and came to the scene.

Some residents are complaining about the lack of maintenance to the street lights, pointing out that the problem areas are in  Sac Bajo,  near the housing development Fovissste, and in parts of  colonia Amplification la Gloria, as well as in some other colonias. The first 100 days of the new government have passed and there are residents who want this problem addressed, as well as improvement of other services such as garbage collection.

Athletes interested in participating in the municipal Softball League, whose next season starts at the end of this month, should attend the board of directors meeting on Tuesday at 8:30 at an unnamed restaurant along the malecon of Reuda Medina. (Probably Minino's). There are already 10 confirmed teams, with interest in adding two more). The night games are placed at the El Pescador ball field and the Ariel Magana field. At the latter field, the women play regularly and will have their tournament there, which will be scheduled during the year.

Juan Carrillo Figueroa, leader of the Chamber of Commerce (CANACO), said they have negotiated a 20 percent discount for the garbage collection fees of their members. There are about 600 members of the organization who will benefit.
The municipal budget indicates the City expects to earn 6,831,511 pesos in fees for the collection, transport, treatment, and disposal of trash. This is one third less than this figure for 2013, when it was about ten million pesos.
It is noted by some employees that there are several recreational areas where the help of volunteers and residents are needed, and they explained, "It is impossible to clean all the mangroves and park areas". (Residential trash pick up is free.)

TOYS!!!!!! can be dropped off  at Barlitos 9a-2p, w an open invitation to attend the DIF (Social Service Agency) toy give-away at 5p (or ~6p) La Gloia bball dome, for Dia de los Reyes. They are seeking toys for boys today.  / This may be rescheduled due to the weather.  (And bite gently into your Rosca & be ready to palm the baby, unless you know how to make tamales. PS. there are multiple babies in the commercial cakes)


My note on fb...
International Nurse's Day is celebrated on May 12th (Bday of Florence Nightingale) but in Mexico, today is . This special day was established in 1931, when Dr. Jose Villagrana said nurses were like a "regalo de reyes" Gift from the Magi. (It's Dia de los Reyes..Kings Day today). You can drop off gifts for the DIF toy giveaway until 2p at Barlitos & the Event is at 5p at La Gloria Bball dome. PS. There are 302,000 persons in Mx engaged in nursing (8 of 10 are women). Mx's first famous nurse was sister Micaela Ayans, during the US Invasion.

Wow, is all I can say to everyone who has donated so far! Let's hope the Island of women has more girls then boys that need presents, look at all those Barbies, Brendas & Brittanys...if you are haven't yet bought your toys to donate, bring boys stuff. Beach towels, sports equipment, beach toys all work. Thanks again for everyone's generosity. Please do come tomorrow for DIF's presentation of the gifts for the kids. It will probably start closer to 6pm at the dome/basketball court near the Super Express in La Gloria. Thanks to Lynda & Lawrie, we will have characters present to bring even bigger smiles to the little's one's mugs!! — with Kristen Tywan.

This guy was taking a stroll past the gate this morning!

LOCATED AT EL MILAGROS VILLAS AND MARINA.
This practice is a modified Hatha Flow class for people who are new to Yoga, experienced Yogi’s and people who need or like to use props and modifications. (Prop’s and modification instruction are provided.)This class is a slow, gentle practice that involves stretching, breathing, gentle movement and poses with meditation and relaxation.There is a place for everyone:Beginners and the experienced: People with injuries or limitations:
For everyone who wants to find a peaceful, relaxing, alternative way to move our bodies.
TUESDAYS-THURSDAYS-SATURDAYS-9:00AM-10:10AM
50 pesos per class locals---100 pesos visitors
Bring a mat and or large towel and WATER! (mats are available)
Changes in the schedule, cancellations as well as additional classes will be posted.
Contact me here on F.B or email katiecain1@gmail.com with questions, concern or for more information

Stuffed fish filet. Just so delicious. Garlic bread rolls were awesome! New York style pizza on its way.This is our first visit to Oscar's. We had no idea the food was this good...or that there was so much more seating than what you see from the street. One more dining experience to love here on Isla. — (220p)

Daily Update: This little guy was dropped over our wall in the middle of the night a few nights ago. It gives me the willies thinking of someone climbing our wall but I’m sure glad to have Sebastian. He arrived just in time for our mini spay and neuter clinic and I vaccinated him yesterday. He seems to be in great health other than many scabby areas where he must have had ticks. Murphy and his litter are finally doing better; it’s amazing how long it takes to stabilize their tummies. Brad had his second heartworm shot and seems to be handling it well. PHEW! He’s such a great dog, a little grumpy with the puppies but he wouldn’t hurt them, he just lets them know that he thinks they’re a pain in the ass. We are three quarters of the way there on the monthly donations. http://islaanimals.org/help/donate-animal-rescue-isla-animals.html