Sorry about the delay...I got a lot of stuff done yesterday, but not these translations. 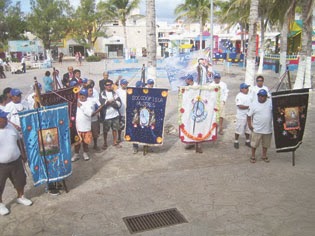 Lanrry PARRA
ISLA MUJERES, 24 de noviembre.-
Leer más...
There is discontent regarding the the first four days of the festivities of the town saint, when the bajada of the icon occurs. (She is taken down from her niche, and out into the community, where various groups each get an opportunity to have a festival in her honor, and, in a sense, to receive her blessings for the upcoming year and give their gratitude for the previous year..)  She is the Virgin of immaculate Conception, and the icon was brought to the island by local fishermen from the church erected by the Spanish, Boca Iglesia.( LINK to Boca Iglesias' history.) The organization (gremio) of colonia Salina Chica, which was founded forty years ago, was not included in the schedule.
The celebrations begin on November 28th, and the next day, the 29th, the festivities are at the group/gremio Los Gastronómicos. On Saturday the 30th, the festivities move to colonia  Cañotal and for Los Jóvenes (The Youths). On the first of December, there will be celebrations by Los Niños, at the fishing Cooperative  “Por la Justicia Social” and at colonia Miraflores. On Monday, December 2, festivities willl occur at the "Isla Blanca" fishermen's cooperative, and on the third at the fishing cooperative "Caribe".
Wednesday, Dec. 4th, will be the most active, with a festival at noon at the Barrio de Los Pescadores, with the Confirmations at the Church at 5pm, at at 7pm the groups/gremios of the Public Security Department (police) and of colonia La Gloria, will close out the Kermes.
Thursday, Dec 5 are the activities at the gremios of the fishermen's  Cooperative  Patria y Progreso, and of the Nautical Tourism Service Providers  Cooperative “Adolfo López Mateos”, as well as the celebration in colonia  Salina Grande.
One of the most anticipated celebrations is the women's group, las Señoras, scheduled on Friday, Dec. 6 at 9pm at the Convention Center. , as well as the two cooperatives Isla Blanca & Isla Bonita.
On Saturday, Dec. 7,  the next to the last group to celebrate are the mobile vendors,  los Vendedores Ambulantes, at 10 in the morning, the at seven in the evening the Virgin will pass through the various colonias in a procession, and afterwards there will be a kermes-celebration downtown. At 10:30pm they will sing Las Mañanitas and have a Mass dedicated to her.
On the last day of the festivities, Sunday Dec. 8, the First Communion Mass will be held, with the gremio of Las Conchitas. (That is the 'nickname' of the icon, also) To close,  there will be a procession taking the Virgin icon out onto the sea, when everyone participates. Then she is returned to her niche until next year. 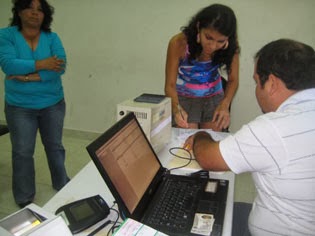 Vaccinations against distemper in pets 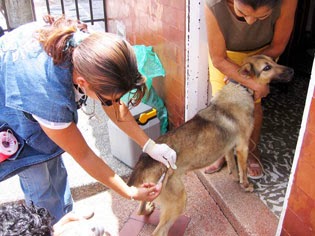 Due to the presence of the disease of distemper among dogs, there may be a possible epidemic among pets, without the necessary precautions, such as immunization of animals. Guadalupe González, of the Animal Care Committee and of the international organization PEACE, recommended that the animals be disposed of by being buried in a hole. He said taking more animals who have died of distemper to the landfill would be a serious mistake which could cause further spread of this terrible disorder.
Symptoms include crusty mucous, runny nose with blood, weight loss, and apathy. This is one of the most serious diseases that can occur to pets, and causes death. It is a virus, that especially affects puppies and older dogs, who are most likely to develop complications. It is spread by contact with fluids from infected animals, including from their water and food.
Lanrry PARRA
ISLA MUJERES, 24 de noviembre
Link

Lunes 25 de Noviembre de 2013 14:19 Jesús Molina DIARIO RESPUESTA
Leer más...
Share
The weekend weather was beautiful, and more tourists arrived, and increased hotel occupancy was reported, tho no specifics are given. It is noted that more than 30% of the hotel rooms are booked for next month.

Lunes 25 de Noviembre de 2013 14:18 Jesús Molina DIARIO RESPUESTA
Leer más...
Share
Currently there is 35 to 45 tonnes of trash produced daily on the island, with collection beginning at 5am daily. There is a new schedule under consideration, to collect the trash from nighttime to early morning, because residents put their trash out at night, and then stray animals feast on it, breaking the bags and scattering their contents.
The proposal is to begin the pick up at eleven at night, and spend the night touring the island, collecting trash. First they will work on dissemination of information and make the public aware of the new schedule.
This is part of a new program of trash collection that is "puliendo” (being polished?..maybe like being fine tuned?) so that it can be implemented as soon as possible. It is also noted that residents who litter or put trash out when it is not the hours for collection will be subject to fines.

Some residents and tourists have been annoyed by having to walk or ride around the construction of the new ferry terminal. It is noted the workers have not repaired the storm drain register that was damaged a few days ago. The work is 70 percent complete, and located on the main street downtown of Rueda Medina.

As was previously reported, the fee for each fisherman in the cooperative for the Hyperbaric Chamber may increase from 250 pesos to 300, and possibly to 400 pesos. (In addition, they pay 500 pesos per treatment.) A few days ago there was a malfunction, which is attributed to a lack of maintenance associated with the unit sitting unused for a long period. The monthly expenses are approximately 20,000 pesos, and they would like to keep it operational all year long, rather than just during the eight months of lobster season.  Expenses include oxygen, telephone service, electricity, possibly salaries such as the doctor and tech, as well as repairs and maintenance.

On Sunday, hotel occupancy increased to 50 percent and there were an estimated 500 sun worshipers enjoying North Beach, which included both foreign tourists and Mexican families. Sunday was hot and people flocked to the beaches. Nautical tour providers and other touristic service providers benefited, as did restauranteurs and merchants.

This is another complaint about mobile vendors, saying their numbers are increasing, particularly on the beaches, and PE says many are coming from Cancun and lack permits.

On November 28th the celebration of the taking out of the Virgin is scheduled to begin at 7pm with the Mass celebrating taking her down from her niche., Then a procession will take her through the streets downtown, and the event will end with a Kermes and dance in honor of the Patron Saint.
On December 4th the Confirmation Mass will be at 6pm.
On Saturday, December 7th the Paseo de Virgin will take begin at 7pm at the parish and go through the colonias and conclude with the singing of Las Manitas at the Church of Immaculate Conception downtown at ~10-10:30p
On December 8th at 3pm a procession will leave the parish of Immaculate Conception for the procession on the Bay, and there will be three large boats available for parishioners. There will be a grand Kermes, and then the Patron Saint will be returned to her niche. Father Jesus Martinez Penilla will celebrate the 50th anniversary of his priesthood.
.