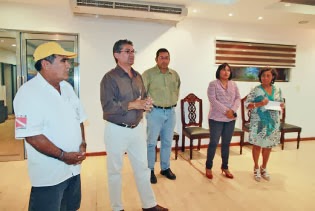 Lanrry PARRA
ISLA MUJERES, 28 de noviembre.-
Leer más...
The First Gastronomic Tasting of  Lion fish (1º Muestra Gastronómica” de pez león) event will take place on Friday, December 6th, at the Town Square. At this event, various preparations of lion fish will be presented.
There was a meeting of governmental officials in the council room to establish the criteria and format. The meeting was chaired by Cristina Medina , director of Ecology, and Humberto Moguel , director of Fishing, and both officials stressed how imperative it is present the benefits of the marketing and consumption of lionfish, whose presence is disrupting the local ecology. It is not a native species and its overpopulation is threatening lobster, fish, and other seafood which are pillars of the island's economy.
To provide accurate information about  lion fish , experts MC Francisco Aguilar, of the Regional Center for Fishing Research ( CRIP ) , and Arturo Gonzalez Gonzalez of the National Commission of Natural Protected Areas ( Conanp ) were invited to speak at the meeting. They reported that lionfish can be consumed without being harmful to people, saying that cooking at high temperatures removes toxins.This event may lead to further tasting events and a fishing tournament, and will by preceded by training for the fishermen regarding capturing and handling lion fish for preparation and distribution, so it can be consumed by the public.
These actions are being performed under the direction of the Mayor, said Christina Medina, as a measure to find economic alternatives for the fishermen, and at the meeting they discussed how to market the product for human consumption. The meeting included fishermen, restauranteurs, and gastrónomos (gourmets/food experts/food critics), among others. They are urgently seeking to reverse the negative ecological and economic effects, and somehow take advantage of the situation.

It is alleged that Robin Leijon, 26, of Sweden has failed to pay hotel and restaurant bills to at least a dozen businesses during his stay in Isla Mujeres, which is said to have lasted over a month. When this was first reported to Immigration, they said there was a lack of evidence. On Wednesday, a hotel reported him to the PMP, Policía Municipal Preventiva, regarding a bill of 10,000 pesos, which resulted in his arrest. He was transported in a Naval vessel to Cancun, for delivery to the Swiss Consulate, and it is expected that they will deport him to his homeland.

Opening of CRIT announced for 2014

The president of the DIF, social service agency, Marthy Vargas, said people who are disabled are heroes who face the world daily with so many disadvantages. She said, "Let's open a CRIT in 2014. We have the support of the governor and his wife, (who is president of the State DIF agency), and with this, Islanders will not have to take the ferry to Cancun to receive their therapies." She thanked the Governor & state for the vehicles that were given, saying, "Now we can transport our special people." She said there already is a group playing wheelchair basketball, and duet of wheelchair dancers named Carlos and Maria. (An explanation of what CRIT stands for was not given)

Viernes 29 de Noviembre de 2013 14:40 Jesús Molina DIARIO RESPUESTA   An elderly woman asked for anonymity regarding her complaint to the reporter about the increasing amount of graffiti being spray painted in the park for Senior Citizens in La Gloria. She said both boys and girls, ages 13-17, do this at night, particularly on the weekends,  and some of them smoke marijuana or consume alcohol.

At 7:30 am the port was reopened and tourism activities resumed with catamarans arriving from the Cancun Hotel Zone. On Wednesday, boats under 50 feet were restricted to port, due to winds associated with Cold Front #14. Boaters were cautioned to pay attention for further advisories, because there could be a new port closure Friday night or Saturday morning. He said "The winds are currently 30-35 km/hr, but the port is open because it is not gusting beyond 40km/hr, which is the limit. The wind may increase in intensity on Friday afternoon.

Dropping temperatures cause increases in respiratory infections, and those with weaker immune systems are more at risk, including people with chronic degenerative diseases, said the Hospital Director, Dr David Valenzo Loeza. People are advised to stay warm, especially those who are under five or over 65 years of age, and to consume foods high in vitamin C. There has not been an increase yet, but typically at this time of year there are more infections of both upper and lower airways, including tonsillitis, pharyngitis, flu, and common colds.

HERE is an article about the Patron Saint Festival
SEE THE BLOG POST FOR MONDAY 11/26 FOR MORE DETAILS ABOUT WHEN & WHERE ACTIVITIES ARE PLANNED>>>  LINK
On November 28th the celebration of the taking out of the Virgin is scheduled to begin at 7pm with the Mass celebrating taking her down from her niche., Then a procession will take her through the streets downtown, and the event will end with a Kermes and dance in honor of the Patron Saint.
On December 4th the Confirmation Mass will be at 6pm.
On Saturday, December 7th the Paseo de Virgin will take begin at 7pm at the parish and go through the colonias and conclude with the singing of Las Manitas at the Church of Immaculate Conception downtown at ~10-10:30p
On December 8th at 3pm a procession will leave the parish of Immaculate Conception for the procession on the Bay, and there will be three large boats available for parishioners. There will be a grand Kermes, and then the Patron Saint will be returned to her niche. Father Jesus Martinez Penilla will celebrate the 50th anniversary of his priesthood.
.

Dick thought 10 seconds would be long enough for the self timer....

Betsy Snider  I have a medium sized white problem. I'm thinking if I feed her enough so she won't fit between the bars on the door, I can solve the problem. She belongs to neighbors but apparently Little Dog told her about the food bowl inside.

While eating breakfast at Amigos earlier this week, we watched this beautiful lady diligently clean the street in front of her shop. We've seen her many times before.

Tonite Jim and I had a remarkable dinner at Casa de los Sueños. We had carrot ginger soup, potato leek soup, tropical salad, turkey, ham, duck, yams, mashed potatoes, cranberry sauce, green beans, apple pie, pumpkin pie. Everything was just wonderful. The company was great and so was the atmosphere. This is my favorite restaurant on the island, Patty and Jim are amazing owners and Jason has done a fantastic job putting this menu together. Thank you to Casa de los Suenos....Gracias!!

Today was 77 degrees in Isla and tonite 63 degrees, oooooh, we're cold lol. I spoke to my sister in Belize and the first thing she said was that it was cold....same temp as us. We are so use to 85 degrees so we complain when the temp goes down. Tomorrow it will be 80 degrees and 67 degrees in the evening....chilly lol People are wearing jackets! (Posted yesterday)