GOVERNMENT OF ISLA MUJERES COMMITTED TO PROVIDE QUALITY SERVICES• Day of social assistance "Making the Future Together"     Committed to offering increased and improved public services and to bringing the authorities closer to the island's citizens, today the Isla Mujeres City Council, headed by Juan Carrillo Soberanis, held a day of  social work, "Making the Future Together" at the community center in colonia La Gloria.
The administration of the Mayor, Juan Carrillo Soberanis, made it known that one of the most consistent demands of the citizenry is on the improvement of public services, and for this reason, through this day of assistance, all the islanders are given the opportunity to carry out the procedures they need in one place and with immediate attention.
As part of the actions carried out by the City Council through this activity, comprehensive medical consultations, free medications, vaccines, cutting and dying of hair, acrylic nails, INAPAM service (senior citizen ID card), processing and receipt of documents to obtain medicines and studies, testing of blood pressure and of blood glucose levels, delivery of toothbrushes, hearing tests, and sales of milk, cereals and cookies.
In addition,  procedures with discounts were provided by the Treasury department, licensing, crime prevention, discounts on infractions, advice on the processing of construction licenses and land use for merchants, anti-rabies vaccines, free plants, assistance with pruning, municipal employment service, legal counseling and psychological counseling to women victims of some type of violence, and complaints about public lighting, potholes,or junk removal, as well as legal counseling relating to family and work, among others.
The municipal government thanked the residents who accepted the invitation to receive the services of the municipal agencies that were present, and he recognized the work of the municipal workers.      The City Council is committed to working so that the inhabitants of Isla Mujeres receive quality services and appropriate attention from the municipal public officials, which was reaffirmed through the realization of these events, which will continue to be carried out every Saturday to improve the life of all islanders.
The citizens of the island were very grateful and acknowledged the work that the mayor, Juan Carrillo Soberanis, carried out, because thanks to this they have free access to medical care and can have direct dealings with various government agencies.

There are photos of a Sabados Magicos event on the mainland part of the municipality.

General enthusiasm about new ferry
Genera entusiasmo nueva naviera. [+] Ver masFull article at this link
The community is enthusiastic about the possibility of a new ferry company, Marinsa, offering competition to Ultramar. The company's General Director, Sr Garcia Garcia said they have made good progress with paperwork with the Merchant Marine and are just awaiting approval to use the Puerto Juarez APIQRoo dock and to start operations April 15, but he alleged that the Director of APIQRoo was obstructing the project.
Sr. Garcia said they've invested 40 million dollars in the acquisition of four boats with capacities for 200 passengers each, and this will generate direct jobs for 250 workers. The 'bimodal' boats also have a capacity for 100 tons of cargo for this route of 15 kilometers. Marinsa is an experienced company from Ciudad del Carmen.
Their paperwork with the SCT (Secretary of Communication and Transport) has progressed well. As of a few days ago, the completion of the Puerto Juarez pier was still awaited, which was being maintained and expanded.  It is said they will offer cheaper ticket prices for the 'captive' (resident) users and for the tourists who visit Isla Mujeres.
Ultramar plans to add a second boat to this route, which PE says is an attempt to annoy the competition, according to information collected.


Religious event Monday evening
Jornada de sanación este lunes[+] Ver masFull article at this link
Celebrations for San Jose will include a night of praise, and a Mass of healing and prayer starting at 6:30, followed by a kerme (fair) in the Town Square, whose proceeds will be used toward the restoration of the parish. The events will include singer-songwriter and preacher Roy Mendoza of the diocese of Nuevo Laredo, Tamaulipas. Hundreds of parishioners are expected to attend, who wish to listen to his music and message in praise of God.
It is also noted that the celebrations of the 500 years since the arrival of the Catholic faith in March 1517 with Spanish explorer Francisco Hernandez de Cordoba will culminate in May with plans for a sea procession of 70 km to Boca Iglesia. In that area a bloody battle occurred between the Spanish and the Mayas. The firearms of the Europeans allowed them to advance, later causing the abandonment of the formerly flourishing city of Ekab, a large fishing port which interacted with what are now ruins at el Meco, Punta Sur of Isla Mujeres, el Rey of Cancun, and other vestiges in the Mexican Caribbean.


Delivery of sports equipment
Entregan material deportivo a promotores. [+] Ver masFull article at this link
Sports equipment for children & youth, funded by the federal CEDEM (Center for School and Municipal Sports) program, was delivered at an event attended by the Mayor, Juan Carrillo, who spoke about his commitment to supporting this sector. He said sports keep children away from drugs and violence and benefit individuals, families, and the whole community. There was equipment for the sports of volleyball, basketball, and soccer. 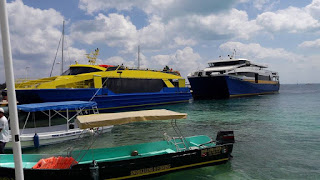 The new 408 passenger ferry "Bo Henry" has arrived, which Ultramar plans to use here during Easter vacation, along with their 450 passenger boat "Mixcoatl", in hopes of reducing the very long lines that have become typical during peak hours of those weeks. Thanks to Jim Silver for the photo! (See translation of TVIM March 12).