The Mayor, Juan Carrillo Soberanis, will head the Municipal Scholarship Committee which was sworn in and will be in charge of transparency in the allocation of scholarships to more than 550 students of Isla Mujeres in the categories of excellence, sports, special, and maritime (help with ferry fees). The other members of the Committee are given.

· The municipal president of Isla Mujeres assures that he will continue working to reach the goals that were outlined during his campaign.
The City of Isla Mujeres, led by the municipal president, Juan Carrillo Soberanis, announced that the Municipal Development Plan (PMD) 2016-2018 will help to meet these objectives in a more planned manner and facilitate the process of evaluation of the actions that are being carried out.
"From the first day of this administration we began to work to fulfill the commitments and pacts that I made to the citizens of Isla Mujeres during my campaign; therefore we agreed to create the PMD, because through it we will ensure that our work will continue to benefit the islanders, "said the municipal president.
In addition, the mayor explained that its fifth guiding axis "Isla Mujeres with Quality of Life" aims to dignify population centers through urban planning, strengthening micro-regional centers, providing infrastructure and services at the island's localities,  access to decent and sustainable housing through programs aimed at acquisition of homes, expansion and improvement in collaboration with different agencies of government, with foundations ,and with civic organizations.
It also seeks to address social welfare problems that are faced by island families, by generating actions that allow them to be integrated into productive, social and political lives, by improving the DIF's  (Comprehensive System for the Development of The Family) infrastructure and its basic equipment, by training DIF personnel, by targeting its programs and by the generation of actions that allow the social development of the inhabitants of Isla Mujeres, among others.
"All of us who work in this administration are committed to working for the benefit of the islanders, and we are sure that with the 2016-2018 PMD we will achieve it optimally, by doing the right planning and obtaining the best results," concluded Juan Carrillo Soberanis .


Expecting extensive participation in yoga session which will be led by Alejandro Maldonado-http://www.tvislamujeres.com.mx/esperan-nutrida-participacion-en-sesion-de-yoga-impartida-por-alejandro-maldonado/
There is also a poster for this event...See events calendar below

March 24.  Yesterday on social media, Jose Santos Mares Garcia posted the following statement: “Me tocó ver ahora mismo cómo dos putos policías le bajaron el dinero a dos extranjeros que no hacían ni PTM. Me dueles México” " Just now I happened to see how two puto (f'ing) police officers took money from two foreigners, who didn't do PTM (sh##). You hurt me Mexico."
His friends quickly also condemned these actions and some asked that the department be cleaned of bad officers in the face of numerous negative events that only denigrate the uniform. Rachell Alvarez said: "If you know who they are, make a complaint, and do it immediately, don't remain silent, because they will continue if no one says anything."
This municipal administration has dismissed several officers for bad behavior and Mayor Juan Carrillo has said that this behavior will not be tolerated.
It is noted that the police receive formal training in maintaining good behaviors and they all have passed tests of control and confidence. Upon learning of this incident, one resident said, "But it appears that along the way, they quickly took the wrong path." They have also received many exams including physical, toxicological, psychological, mental ability, personality, and polygraph.
According to official and unofficial information, there have been many tourists who have received bad treatment from officers, and for this reason a call is put out to the community to record any officers 'falling into irregularity' (behaving illegally) and present it to the municipal government, whose authority protects citizens who collaborate.

Kayak full of Queen Conch impounded
Aseguran kayak cargado de caracol rosado [+] Ver masFull article at this link
Personnel with the Mexican Navy and with CONANP (National Commission for Protected Natural Areas) impounded a kayak filled with 40 kilograms of Queen conchs. During a joint patrol on Thursday at a location 25 nautical miles north of the Moon Palace hotel, an abandoned five foot long yellow kayak was found which held 282 conchs weighing 39.79 kilograms, according to a statement released by the officials. The area is near Puerto Morelos and known as El Cid, Bocana, Tanchacte, and Limite Los Limones.
The General Law of Fishing and Sustainable Aquaculture in Article 138, Fraction IV, establishes a sanction equal to 10 thousand pesos and the equivalent of between one day to 30,000 days of minimum wage  to those who commit the infractions for extracting, catching, possessing, transporting or trading species declared banned.

Vicente Celis is one of the aspirants for the position of municipal Director of Fishing, and Secretary on the board of the Patria & Progreso cooperative. He spoke at a meeting on the beach of the Caribe cooperative, where they intended to make a nomination, but that was later postponed.
He proposed the creation of a trust to help dozens of retired fishermen, who lack medical help, and to create an agency to meet their basic needs. He was accompanied by Raul Gonzalez, who also aspires for the position, although it appears he is reaching an agreement to be Sr. Celis's secretary if he lends his support.
This position has been vacant for some time and the fishermen say they want a fisherman to fill the position, who is familiar with the needs of the cooperatives, rather than a bureaucrat.

A "Doctor in your Colonia" medical clinic was held in the Continental Zone of the municipality, as part of the Day Against Tuberculosis, offering free test and medical advice, under the authority of Dr. David Valenza Loaeza, who is the medical coordinator in the Continental Zone. He noted that this disease is endemic in the country, and of course in Quintana Roo.
In addition to these preventative actions against tuberculosis, the Doctor in Your Colonia event provided services of: comprehensive medicine, dental care, optometry, vaccines agains Human Papilloma and Influenza, vaccinations for children under 5 years,  Rapid HIV tests, psychological assistance, and delivery of free medications, among other services.

Water Conservation
Commemoration of World Water Day included a clean up at the Salina Grand lake, and students, including high school students, visiting the wastewater treatment plant. This week, actions of environmental education were carried out that will allow islanders to have a healthy environment and a better quality of life which were coordinated by the departments of Urban Development and the Environment and ZOFEMAT (Federal Maritime Land Zone) and the Aguakan company. 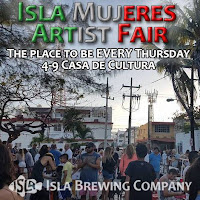 Monday March 20  Equinox & Day off for Benito Juarez's birthday
Mass for San Jose at Immaculate Concepcion Church at 6:30p, followed by a kerme (fair) in the Town Square,whose proceeds will be used to pay for the restoration work on the church.

Are you ready for some “GOOD TIMES”? Then join us at this week’s Artist Fair, Thursday 3:30 – 8:30 at the Casa de Cultura in Isla Mujeres. No need for scratching and surviving to find one of a kind pieces of art from the island’s super talented artist.
Local food, we got it. Cafeteando Coffee and Bread- awesome empanadas, Beachin' Burrito-California style burritos, Bobo's Grill & Bar- fried chicken, La Chatita-excellent tacos, and many more food options.
Our popular Indian Pale Ale “La Mordida” took last week off, but it is fresh out of the brite tank and incredibly delicious.
Music this week is “Frecuencia Tropical“ a very popular island band that had a “temporary layoff” several years ago, but they are going to play a “reunion show” from 6-8.
“Ain’t we lucky we got em”