Lanrry PARRA
ISLA MUJERES, 6 de mayo.-
Leer más...
The municipal Drector of Economic Development, Suemy Gonzalez, said six courses will be offered at the Community Center, in coordination with CECATI. The courses will be:   Computer maintenance, Organizing Events, Intermediate English, Housekeeping II, and Restaurant Supervisor & Reception. Registration is available from May 6-12 at the Community Center and information is given in the article about document requirements. Students must be at least 15 years old, and the cost of the certificate is 270 pesos.
As part of this program, they will be assisting the islanders to participate in fairs and events that allow them to make their crafts and sell them, as was the case in the recent event by the state government with the National Fund to Promote Artisians "Artisan of the Year", and at the Tianguis Turistico in Cancun where Marcelino Velazquez will represent Isla Mujeres. He was involved at the Artisan of the Year, and is known for his work with shells and other materials from the sea. He and other artisans will exhibit their work from May 10-18, at the Tianguis Tourism Fair.
Finally, it was revealed that support for this sector has begun with the First Municipal Artisans Fair which will be held once a month, where they can display and sell their work.

All the mothers and children of the island are invited to the traditional Festival of the Children's Day and Mother's Day which will take place Thursday, May 8, at 5pm (the location is not mentioned. Last year it was at the baseball field in front of Chedraui). It is organized by the DIF and will include surprises, entertainment, clowns, favorite characters, bouncy inflatable whatever those are called, gifts, games and raffles.
In another vein, also this week the municipality is benefiting from the governmental program  “Yo También Cuento”, (I also matter) which is a campaign for registration of anyone who lacks their birth certificate and a legal identity. This is part of the President's National Development Plan that seeks to have everyone registered by 2015 who lack a birth certificate.

There are about 20 boats registered for the 11th International Fishing Tournament Cosme Alberto Martinez Magana, but typically about 60% register on the final day, at the Captain's Dinner the night before the event. Last year there were 117 fishermen, and this figure is expected to be met or exceeded. Organizer Humberto Moguel said one of the factors for the low number of registrants is that last weekend there were two fishing tournaments, in Puerto Morelos and Mahahual,  in which the same fishermen participate who usually compete in this one.
The starting signal is scheduled for Saturday, May 10th at 8am, which it appears will be done by Governor Roberto Borge, assisted by the Mayor Agapito Magana Sanchez. There are 300,000 pesos for first prize is a pick up truck for second place, a golf cart for third place, a boat is the fourth prize, and there there are several scooters as prizes.


This morning an abandoned motorcycle was found after being stolen from colonia la Gloria.

Islander women of the Municipal Softball league will play against a team from  San Felipe, Yucatán, in Isla Mujeres as part of the events celebrating Día de la Marina, as well as to honor their manager Manuel León Paredes. The women who are preparing for this event at the ball park Picho Magana include housewives, secretaries, cooks and administrative employees. They will also invite two teams from Cancun and two from the island for a tournament cuadrangular. The women who play want to spread the word and share the camaraderie, which is obvious, so they are inviting anyone who is interested in playing softball to come to the field, which is located in front of the facilities of Public Security (the police station) on Monday, Wednesday, and Friday around 6pm.


Sexagenarian seeks support for his retirement

Víctor William Salazar,  66 años, who worked as a mason, is seeking assistance from authorities with his application for benefits from the Instituto Mexicano del Seguro Social (IMSS). He says he needs his pension because he can no longer work and his sick wife depends on him, but the IMSS has him going in circles, saying his name is not right, the registration number does not match, and he wants help from the governor. He says he has been affiliated with Social Security since 1983, and now they say his data is not displayed, so he is requesting help from Governor Roberto Borge, and trusts him to help resolve this problem.
.
Read more: Pide sexagenario apoyo en gestión de su jubilación
Yesterday.......

After the heavy rains caused by cold front number 45 (sic..#54), residents in neighborhoods such as Colonia la Gloria are asking that the storm drains be cleaned because they are blocked with trash that was washed up by the strong currents. This was expressed by resident,  Rosa Maria Chan who said the Vectors department needs to get busy spraying because mosquitoes are multiplying as a result of the rainfall, and she suggested that SESA should intervene to initiate  the fumigation immediately.
Read more: Piden vecinos saneo de coladeras en La Gloria
Complaint of neglect of sports court


The multipurpose sports court in La Gloria is located next to the Institute for Adult Education. It is a popular area with a lack trash receptacles. Water enters the dome, causing puddles and run off to the south. It is noted that the mayor has been investing the sports infrastructure, and has completed the rehabilitation of the tennis center, and that maintenance is necessary for these spaces to extend their life.

Waiting to find out what killed the fish
A la espera de saber qué mató a los peces. [+] Ver mas

On Monday, the Ecology director reported that they had collected two tonnes of dead fish, and then less than 100 kilos were collected by a brigade of City employees. Now the fish have stopped dying, and the few specimens seen around the bushes appear to have died a few days ago. It is presumed that the rain oxygenated the water of  Salina Grande. The presence of wild birds feeding on the fish indicates the water is "healthy", but the results of the laboratory tests are pending.

Seventeen boats set sail on Wednesday and Thursday from Pensacola for the 28th edition of this regatta, said the Commodore of the Isla Mujeres Yacht Club, Enrique Lima. The passenger boat Hello Dally, with Captain Gray Walter will provide any assistance needed during the journey of 570 miles. Those in the Cruiser division set sail on Wednesday, and on Thursday those in the Racer category departed for Isla Mujeres. They are expected to arrive Saturday night, and the welcome at Playa Norte by the local Yacht Club is scheduled for the following day. The official welcome and declaration as Distinguished Guests is May 13th at 7pm and the awards will be given on the 15th.
Sr Lima said the problems with Customs have been resolved because the agency is permitting the documents to be done from the United States, so there are no further problems with procedures for temporary importation. However previous problems with the rigidity of the agency has reduced the number of participants, who decided not to compete after the complicated procedures the participants went through two years ago.This event began 50 years ago with the signing of agreements between the two countries. Part of the celebration will include declarations of Pensacola and Isla Mujeres as Twin Cities.
This event has no cash prizes, and there is a perpetual cup that is held by the winners until the next competition. 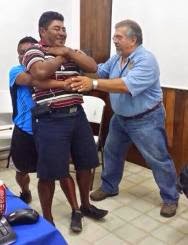 This has the same information that was already translated about this courses offered for updating the documents required by seamen, noting that the safety course takes place tomorrow, Thursday, from 9am to 6pm.

With a little over a week until the start of the whale shark sighting season, at least 15 licensees were unable to renew their permits on time and were asking for an extension (reconsideración de tiempo), via intervention from the municipal authorities, but then the director of the Wildlife agency closed the proceedings. Wednesday was the second time they asked for intercession, and last week the Council sent a letter to the Federal Agency, who may consider the petition, but on Tuesday the only window in Cancun was closed. Agapito tried to intercede with the SEMARNAT (Secretaría de Medio Ambiente y Recursos Naturales Ministry of the Environment and Natural Resources), but that does not seem to have been effective so he is going to their offices on Wednesday for an explanation.
However, they are also in the process of cutting permits to reduce the number of boats daily to 160 and y no más de 220 unidades dentro del político de avistamiento, según argumento oficial,...no more than 220 units within the 'politico de avistamiento', is the official explanation. Uually they say the area 'de avistamiento oficial'...which translates as the official sighting area...I'm guessing they substituted  'politico' for 'oficial'?)
It is said that there are 15 licensees who had a total of 80 permits that were allowed last year, and it appears they will not be allowed the same quantity this year, which is causing concern. Of the more than 220 boats with permits in the past two years, about half are split between Isla Mujeres and Holbox. At that time, the leader of the Association of Licensees for Whale Shark Watching, Sergio Barros Pena, predicted that in the following season, they each would only be allowed one permit, due to the new 'disposicion' of the Wildlife agency.