In Isla Mujeres Daily News Thursday, May 8 The Afternoon Edition Isla Mujeres is being promoted at the Tianguis Turistico 2014 from May 6-9, with over 8000 participants, from sixty countries and five continents, including 400 members of national and international media who are covering this event promoting tourism in Mexico. The opening event was attended by the President of Mexico, Enrique Pena Nieto; the Mayor of Isla Mujeres, Agapito Sanchez Magan;, and the Governor, Roberto Borge Angulo, who cut the ribbon to inaugurate the area for Quintana Roo, which includes a module promoting Isla Mujeres.
The mayor had meetings to promote the island, and brochures were delivered in Spanish and English promoting Isla Mujeres, that included cultural, historical, and touristic information. The brochures include photographs and a map, and include whale shark sighting, and locations such as Isla Contoy, El Meco ruins, and Boca Iglesias, as well as the Continental Zone. 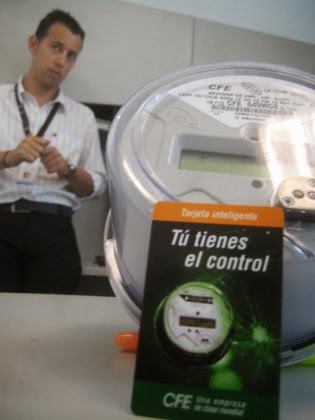 In late April, the CFE (Federal Electricity Commission) began inviting customer to switch to using a smart card for billing of  this service. So far 208 customers have switched, and 3500 digital meters have been installed installed in Isla Mujeres. This service is entirely optional and can be obtained at the customer service window at the CFE office on the island, or through a group of workers with the group IUSA who have been hired for this purpose and are going house to house, offering to carry out the conversion of your contract to digital billing, with an electronic signature and an official photo ID, and the process is completely free.
Currently it is only available for domestic rates, and does not include commercial customers. The users with smart cards can chose to schedule their payments monthly or bimonthly, and they can chose the effective day, which can be the 1st, 5th, 10th, 15th, 20th, or 25th of the month. The benefits  of monthly payments means the bill does not get so high. Also, there is no cost for reconnection in the case that service is suspended. Payments can be made at the electronic cashiers at the office.

Kevin Spacey at Tianguis Turistico with the President on his left and our Governor is the man to his right. There are many more photos from the tourism fair at the TVIM site...follow the link above.

Jesús Martínez Ross, the first governor of this young state of Quintana Roo, celebrated his 80th birthday at “Pingüinos” at the Posada del Mar, with his wife, family, and friends who shared food, happiness, and good wishes. The guest of honor appeared healthy and happy, and this event highlighted the human side of this respected man who is very dear to Isla Mujeres, which is the place of residence of this long lived politician.
Read more: Celebra su cumpleaños 80 Don Jesús Martínez Ross
Shells protected by ban period taken from vendors

Read more: Decomisan caracoles en veda a ambulantes
Workers with the Ministry of Agriculture, Livestock, Fish, Food, and Rural Development (SAGARPA) confiscated four shells from a vendor who has been selling these items for a long time, and the neighboring seller fared worse, since he had no permit, all his items were seized. There is no office for the agency on the island, but it is presumed these visits are for the confiscation of seafood that is under a ban (Conchs and Starfish).  These vendors were selling near the Turtle Sanctuary Tortugranja.
Increased efforts to control larvae
Workers with the municipal Vector's agency have been working since Tuesday at control of larve, beginning in the southern colonias of the island, and they will finish downtown. They are visiting homes and ensuring there are no open containers where water can gather and mosquito larvae can breed. The public's cooperation is critical to control of mosquitoes.

Promotion of "parts" of this destination