In Isla Mujeres Daily News Saturday, May 3 The Afternoon Edition

The other car ferry should be operational in 10 days

The vehicular ferry Isla Blanca is receiving preventative maintenance after the clutch needed repairs, and should be ready in about 10 days. Meanwhile the other ferry, Segio Aguilar Gracia will provide service, but is limited to carrying trucks that are not taller than 3.8 meters. The company representative said this is not a problem for most of the trucks bringing supplies to the island, and noted that the cable that broke on the ramp at Punta Sam has been repaired by the Port Authority. 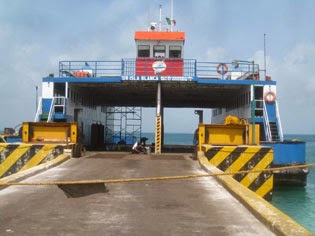 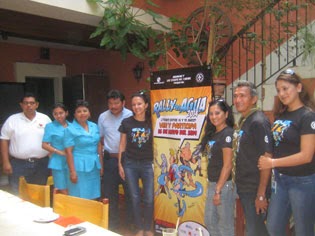 The Sixth edition of the Rally del Agua will be held in Isla Mujeres on May 16th, with young people from the island competing against youths from the municipality of Benito Juarez (Cancun). This year the rally will be done in conjunction with the Scouts del Caribe. DHC-Aguakan, who hold the annual rally, are providers of potable water, and they educate young people and the community in general to be ambassadors for the preservation of our planet. Each year they organize this competition to teach the participants, in a fun and healthy manner, about caring for the environment, especially water.
This year the competition will take place in Isla Mujeres, for the first time, with the objective that the 75 participants will gain a greater understanding of this beautiful island.  The theme is "Heroes and Villains".  The competition involves both physical prowess and knowledge of the facilities that provide water and sanitation services to the community. The participants will have previously studied a guide on water services and the history of Isla Mujeres. The young people will have an opportunity to learn, in a fun and original manner, about the infrastructure that brings water to their home, collects it after use, and treats it to be returned to nature without risk of contamination.
There will be 75 participants, aged 16-18, divided into 15 teams, of which three teams are from the high school in Isla Mujeres, Colegio de Bachilleres. 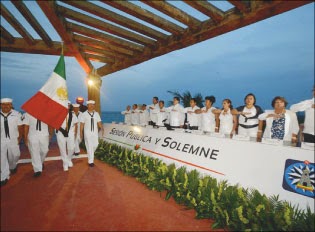 The participants of the Regatta XLVI del Sol al Sol were formerly and officially welcomed as Distinguished Guests by the municipality, with a marching band and guard, bearing a flag, (as well as speeches) at Punta Sur, overlooking the majestic Caribbean Sea. The Commodore of the Yacht Club of St Petersburg, Matt Bryant, read a proclamation that the Mayor of the city of St. Petersburg, Rick Kriseman, declared April 24th as "Isla Mujeres Day". It was recalled that the competition was created in 1968 and it strengthens the bonds of friendship, cooperation, and cultural exchange. The awards were given to the children who won the competition to drew the logo for the next Regata Sol al Sol, who were from Jean Piaget Elementary school:  Romina Rodríguez Avila (first place); Mía Boyan Lima (second place); and  Sofía Azueta Vicencio (third place). 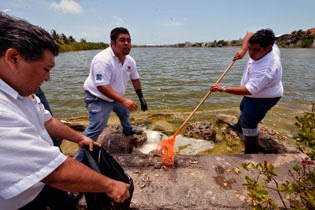 
After hundreds of fish died in the Salina Grande for unknown reasons, the City took action by conducting an immediate clean up and making an investigation into the cause. The staff of the department of Ecology and the Federal Zone (Zona Federal Marítimo Terrestre, ZOFEMAT) conducted the clean up, and a specialist was hired from LACESA, who specialize in the certification of beaches, to study of water samples and water temperature, with results expected on Tuesday, May 6th.  Also involved are the municipal and state Departments of Health, and COFEPRIS who are studying the water, as well as studies on samples of the dead fish to determine if human consumption causes a health risk.
One possible cause of the fish deaths is overheating of the water, because when tested it was found to be higher than normal, which causes a lack of oxygen. It is strongly recommended that people do not eat any of the dead fish and avoid direct contact with the water of the salina, to avoid any potential health problems. Authorities also ask locals to take special care of the natural resources that we have, and avoid littering to have a healthier environment, because pollution can play a negative and lethal role.
As a final fact, it was revealed that the Department of Ecology, with the invaluable support from environmental groups and volunteers, is conducting clean ups every 15 days, and every time this happens, it becomes dirty again afterwards. They are considering presenting this problem to the City Council, to create an initiative to fine people who are littering at this site that is important to the Island environment.

Investigation of fish deaths in the salina