In Isla Mujeres Daily News Friday, May 2 The Afternoon Edition


May 1st march for workers led by Agapito 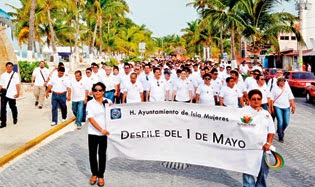 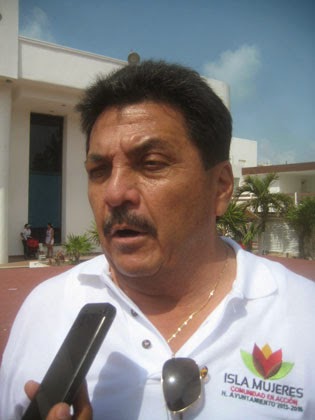 ISLA MUJERES, 1 de mayo.-
Leer más...
In response to requests from the whale shark licensees, the Mayor has sent an official letter to the Ministry of Natural Resources and the Environment (SEMARNAT) and the Wildlife Department, askin them to reconsider their position to allow the licensees with more than one permit to work. This disagreement began a few days ago when the Wildlife Department opted to change the Management Plan,  when there were only 15 days before the Whale Shark season begins on May 15th. The mayor characterized this  as an arbitrary and bureaucratic mentality by the staff of the Wildlife Department. He agrees that the activity needs regulation, and noted that it is a huge industry that generates significant resources for the municipality and the federal government. He said three months ago the authorities,  the tour service providers, and the community worked together toward modifying the Management Plan, but what has happened now is arbitrary. He said the workers who provide the whale shark tours deserve respect.
He concluded by saying a commission will travel in an official capacity to Mexico City, and they will meet  with the head of SEMARNAT, Raul Gonzalez, with the intention of resolving these injustices. They expect to have an answer this next week. 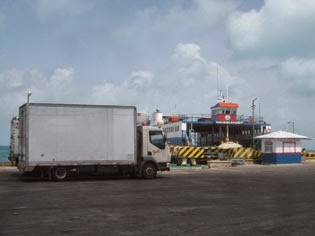 
Because the clutch of the ferry "Isla Blanca" was faulty, it has remained out of commission since Tuesday for three consecutive days, affecting deliveries to various businesses of the island. The ferry "Sergio Aguilar Gracia" has less capacity than the "Isla Blanca", and it is not known when the larger vessel will be operational again.
Because the "Sergio Aguilar Grace" has been providing service the past three days, the ramp at the terminal in Punta Sam suffered a broken steel cable. The vessel has its own ramp, which sits low on the existing ramp and doubles the weight, which caused the cable to break.
There are dozens of  trucks of two and three axles waiting to be transferred to the mainland, and the trash compactor trucks from the Trash Transfer Facility have not been able to cross, and those odors are causing unease among the other drivers. There are also trucks in Punta Sam that are waiting to cross.

A company representative confirmed that the Isla Blanca ferry (the largest one) is out of operation for maintenance and will remain so for at least ten days. Jose Sunza said this is a result of the constant "varamientos" (literally: strandings)  because of the lack of an adequate job of dredging the navigation channel. He said at the moment only the ferry Sergio Gracia Aguilar is in operation and therefor only vehicles under 3.8 meters high can be transported. The company acknowledged that in recent days there was a problem with the ramp at the port of Punta Sam, but this was attended to by personnel with the Port Authority and has been remedied.

"More work & more investment for our workers of Isla Mujeres"

Read more: Celebra clase trabajadora su desfile
More than 800 children enjoy their festival
This was on the continental part of Isla Mujeres.
Read more: Gozan al máximo más de 800 niños su festejo
The first basketball court of the island is 'like new'
This has the same information as previously given & doesn't say who won the game  between the yachters and the islanders.
Read more: Dejan como nueva primera cancha de 'basquet' en isla
Celebrating the magic of being a child

Read more: Celebran la magia de ser un niño
Children's Day ( Día del Niño ) was celebrated at the various schools with cakes and pinatas, as well as some clowns who delighted the small children. Sweets and food were shared, with music, and in some cases there were small festivals organized. The children were allowed to go home early, since they were only having celebrations, and they will be off on Monday for the long weekend.
Presenting the Children's City Council