In Isla Mujeres Daily News Sunday, May 4 The Afternoon Edition 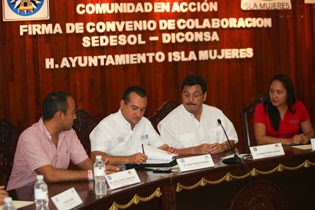 Two dolphins rescued: One was dead

Lanrry PARRA
ISLA MUJERES, 3 de mayo.-
Leer más...
In the Continental area of Isla Mujeres, residents called officials when they witnessed two dolphins washing up in the vicinity of the Chacmuchuch lagoon. One was dead, and the other had vital signs with several injuries, and then it died. They were each about two and a half meters long, weighing around 120 kilograms. The first to respond were personnel from Public Safety (police), and Municipal Preventive Police (PMP), who were assisted by staff from Civil Protection, until the staff from the federal agency PROFEPA arrived.

This was scheduled to begin at 9am on Sunday (today, but I suspect the rain caused rescheduling) to celebrate Día del Niño, by the PRI for all children in the town who wish to participate, at pier #6, next to the (vehicular, I think) ferry. Registration is open until one hour before the event at 99820 99719 or 99824 43444, and entries are free. Prizes (from first to third) are a family swimming pool, a water slide, and an inflatable floating 'island'.

SEDESOL signs agreement with the City