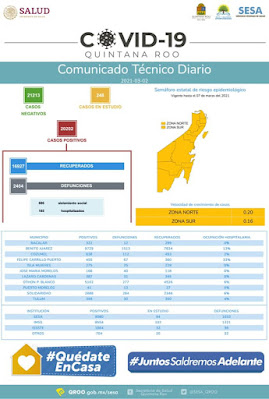 Today's forecast for Isla Mujeres says: Mostly cloudy to cloudy skies, with low probabilities of occasional isolated rains, hot to very hot temperatures during the day, southeast wind from 15 to 25 kph., with occasional stronger gusts. I checked the forecast because there is no wind this morning & the ocean is flat, which usually indicates a "norte" will be influencing our weather in the near future. The first Spanish expedition to Mexico landed on Isla Mujeres this week in 1517, after they were blown off-course by a norte, on their way from Cuba.
The graphics show Cold Front #39, with red dots indicating stationary characteristics, and a high pressure system at middle levels of the atmosphere. Rain is expected on Saturday (orange circle) with the arrival of Cold Front #40. 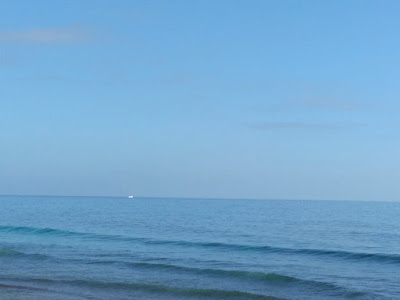 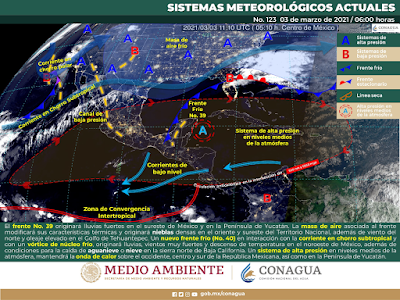 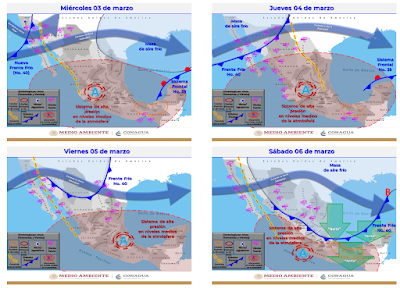 AFFORDABLE C-19 TESTING OFFERED AT MOBILE UNIT
The organization Red Positiva (Positive Network) is starting a Covid-19 testing campaign on the island, in coordination with the municipal government. It is primarily aimed at tourists, but residents who want to be tested can also visit the mobile unit, which will have prices that are accessible to the public. It will be located at the esplanade of the Casa de la Cultura (at Abasolo & Guerrero, by the photo-op sign) Tuesday thru Saturday, 9a-1p. The tests they offer are: PCR, Antigen, and Antibodies IGG & IGM. (Prices aren't given.)
Officials said these efforts to continue fighting this disease will contribute toward progressing to the green color on the state epidemiological light. They stressed the importance of C-19 prevention habits such as the consistent & correct use of face masks, frequent hand washing, social distancing, and avoiding agglomerations & physical greetings. 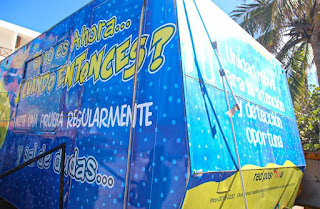 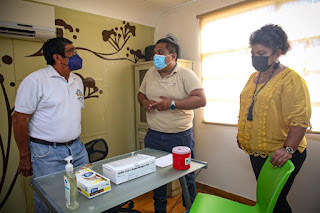 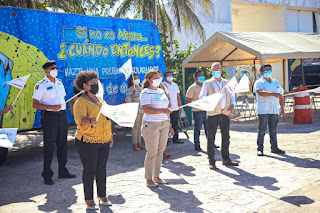 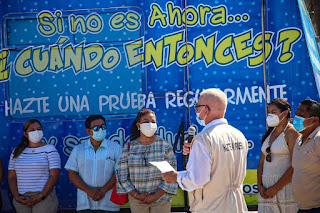 On Thursday night, the Governor reported that contagion rates for C-19 for the15-day period since mid-February had increased in five municipalities, of which three were in our Northern Zone:  Benito Juarez (Cancun) increased by 2%, Lazaro Cardenas (Holbox) by 6% and Tulum by16%. Four municipalities in our Northern Zone had decreases with Isla Mujeres and Puerto Morelos decreasing by 100%, Cozumel by 73% and Solidaridad (Playa del Carmen) by 37%.

In the Southern Zone the increases were Felipe Carrillo Puerto-10% and Bacalar-27%, and the decreases were Jose Maria Morelos 100% and Othon P Blanco (Chetumal) 31%.

The Governor said that in the five municipalities with increases,  reviews and inspection measures will be intensified in public places, on transportation, bus stops, shopping centers and restaurants. He said it is necessary to pay a great deal of attention in these locations to prevent returning to the Orange color on the epidemiological light, which caused so much damage. He emphasized the need for business owners to comply and for the residents to avoid having parties or going to crowded places and to wear face masks correctly, maintain healthy distancing, wash their hands frequently, and to follow the protocols.

This is Cancun (Benito Juarez) with an increase 2% in the past 15-day period. But that was preceded by a significant decrease from the peaks that contributed to our Zone going into Orange for 4 weeks, which the Governor attributed to the December holidays. It is the most populous municipality with ~49% of the state's population. 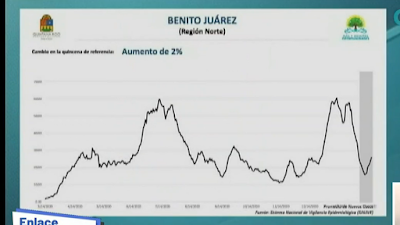 The graph for Isla Mujeres wasn't put on the screen. He said that Isla Mujeres has had some spikes in the past, but now it has been doing well with a 100% decrease for the previous 15 days, and is nearly at zero. 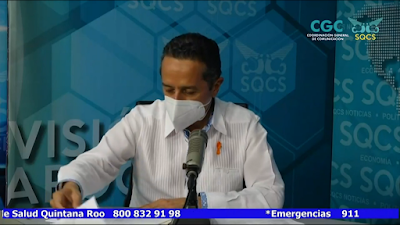 Here's Isla Mujeres from the previous summary on February 19th. Imagine the line going downward to nearly flat along the bottom and the text saying Disminucion 100%. 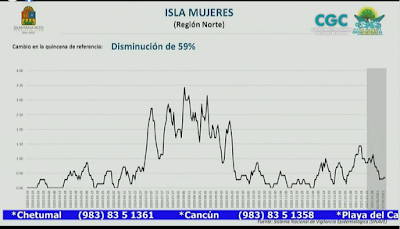 Puerto Morelos  had a 100% decrease on the previous report also. 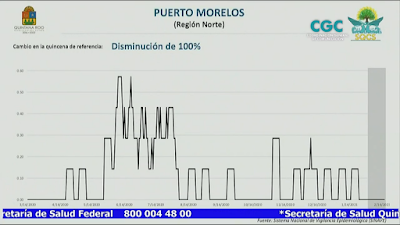 Cozumel decreased by 73%, but its graph also didn't make it onto the screen. Here's its graph from the previous 15-day report in mid-February. Imagine a further downward trend & the text saying Disminucion 73%. 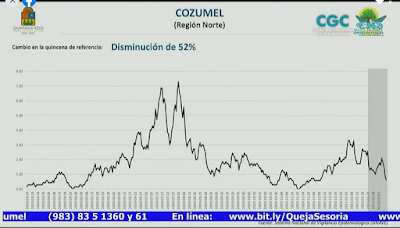 This is Playa del Carmen which decreased by 37% 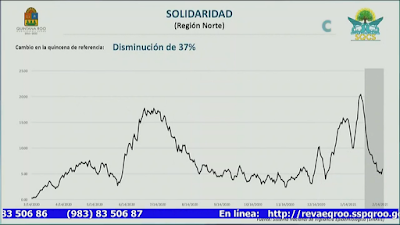 This is Holbox, which increased 6% 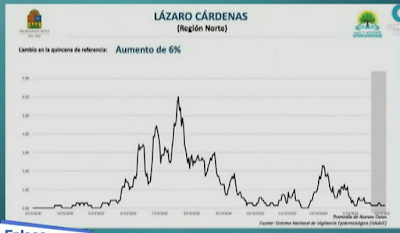 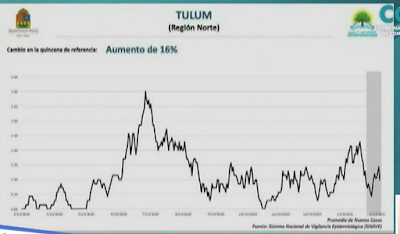 Yesterday, authorities with all three levels of government reviewed the two main beaches of Isla Mujeres, North Beach and Playa Centro, as part of the strategy to take care of sargasso in Quintana Roo. They were Kerem Pinto Aguilar, Director of ZOFEMAT (Federal Terrestrial Maritime Zone) in Isla Mujeres,  Rear Admiral Cesar Gustavo Ramirez Torralba, state coordinator of sargasso strategies,  and Mariana Garcia Pérez, coordinator of vinculación and state government liaison. Ms Pinto Aguilar said that any sargasso that arrived was immediately removed as part of the ongoing, continual work done by ZOFEMAT personnel. There is also specialized machinery which has facilitated the work of removing sargasso and keeping the beaches in optimal condition.

TV Isla Mujeres reports that in the next few days, about 260 fishermen of Isla Mujeres will receive cards that give them access to assistance from the "Bienpesca" program of the Federal Government, which will be provided as a single payment of 7200 pesos. It is noted that fishermen in other municipalities received their cards last year. The fishermen receive economic support due to the fishing bans at this time of year. The two-month ban on Grouper fishing began on the first of February and continues thru the end of March, the four-month ban on lobster fishing that began March 1st continues until the start of July. Fishing of octopus is banned from January 1st to July 31st and the ban on sharks will be May 1st to June 30th. Local fishermen of different cooperatives said they had been warned by their managers to expect a high level of vigilance by the Navy, so they should remember to carry all their documents on board and especially, to refrain from capturing products that are out of season. LINK