Inauguration for Start of Work on the Mayan Train

The President of Mexico and the Governor of Quintana Roo participated in an event to inaugurate work on Route 5 of the Tren Maya/Mayan Train between Cancun and Tulum. Governor Carlos Joaquin said that this section is of strategic importance because Cancun is a tourism powerhouse and will surely be the window of the Mayan Train for the world.

The northern section of Route 5 is a 49.8 kilometer elevated double-track supported by a 10 meter-high structure going from Cancun to Playa del Carmen. Passenger trains will run at an estimated speed of 160 kph and freight trains will travel at 100 kph. The passenger trains will offer panoramic views of the Mayan world including the turquoise blues of its coasts and the infinite green of its jungles.

The 60.3 kilometer southern section to Tulum is located in an area through which millions of visitors from all over the world travel year after year. The train will offer a modern, safe and efficient transportation alternative between Playa del Carmen and Tulum, which is one of the regions with the most tourism development in Mexico.

Emphasis has been placed on the utmost care towards the environment, which is exemplified by the fact that the train has a double-track electric system. This will limit the effects on residents, businesses and visitors by reducing the noise and vibration levels, thanks to an electromotive system, which replace the "sleepers and ballasts" of a plate-track system.

President Andrés Manuel López Obrador said the decision to authorize the construction of an second-story type elevated track was done to avoid damages to this region with the highest tourism success, where road closures, diversion and traffic jams would do more damage than has already been caused by the pandemic. The President said, “This will help integrate the southeast, for Quintana Roo, because there is a great difference between the south and the north. In the south there is more abandonment, more poverty than in the north of Quintana Roo, here in the same state."

The Governor said that the  Cancun-Tulum route has a great deal to contribute to the comprehensive project, because it represents a modern and avant-garde perspective of the regional ancestral origins, which is an essential part of the strategic vision to unite and develop the Mexican-Mayan world, with identity and progress.  "In Quintana Roo, we are ready to do our part," he said, noting that the social and tourist strength of Quintana Roo gives context to the start-up event for the Mayan Train. “In Quintana Roo, we never lower our guard. Day after day, we are fighting to maintain containment of the contagion of Covid-19 and, in parallel, we are advancing with the reactivation of tourism and productive activities. We have recovered the frequency of our flights quite well, our hotel capacity is growing again and we still need the return of cruises, which is expected at the middle of this year," he said

The Governor tweeted: The Tren Maya represents economic integration, regional development and social equity.  Cancun will be the starting point, to visit impressive Mayan archaeological sites, and to enjoy modern world-class hotels and extraordinary theme parks. @FonaturMX began the construction of section five of the Mayan Train, which will generate jobs and reactivate the region's economy.

The graphic shows the stations for Route 5 at the Cancun airport, Playa del Carmen and Tulum in yellow. 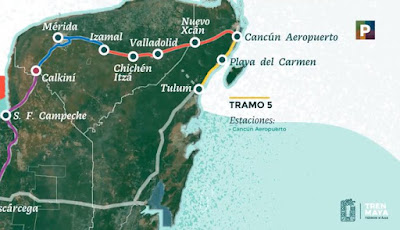 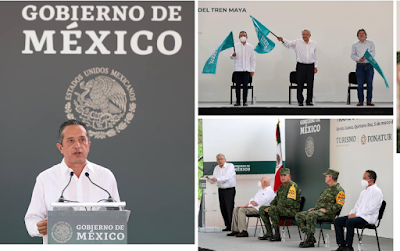 On the national map for March 5th, the municipality of Isla Mujeres continues to report 275 positives and 25 deaths from Covid-19. On the state geoportal for March 5, Isla Mujeres continues to report 6 active cases as: Meteorologcio-3, Salina Grande-1, Amp la Gloria-1, and colonia 006-1. The geoportal has been reporting these same active case statistics since February 10th, which was 22 days ago, indicating to me that this information is probably outdated. 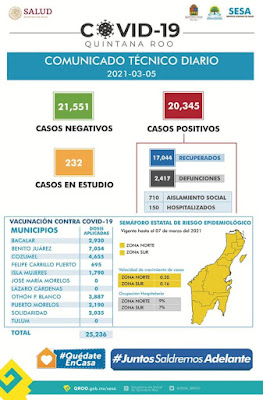 Our seas are calm on this Saturday morning, with overcast skies at sunrise.Photo from MaraVilla Caribe Bed & Beach 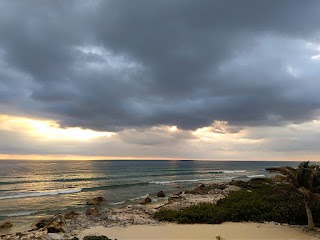 The regional forecast says (1) a high pressure system is located on the surface in the NE portion of the Gulf of Mexico whose extensive peripheral circulation is driving continental polar air, with a modified influence on the peninsula and state of Q Roo, generating variable cloudiness with low probabilities of occasional isolated rains, with fresh strong winds from the north, over the Yucatan and mainly in the coastal area of Quintana Roo. (2) There is a high pressure system & heat wave in the middle portion of Mexico, which is modifying the mass of polar continental air. (3) Cold Front #40 (see map) is moving E-SE generating a very slight decrease in temperatures, variable cloudiness and storm clouds with probabilities of rain & lightning, and cool, strong winds from the north and northeast, which is expected to begin influencing the western portion of the Yucatan peninsula in 10-14 hours, and later the state of Quintana Roo.  The red circles on the frontal systems mean 'stationary' and the purple squigglies represent wind on the extended forecast maps. 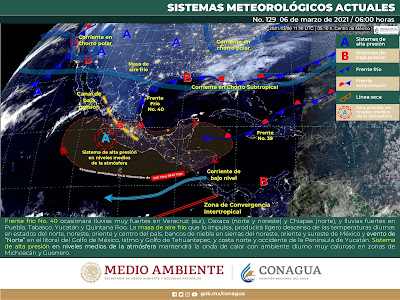 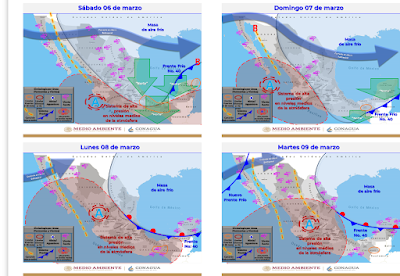 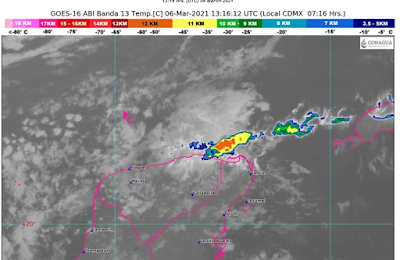 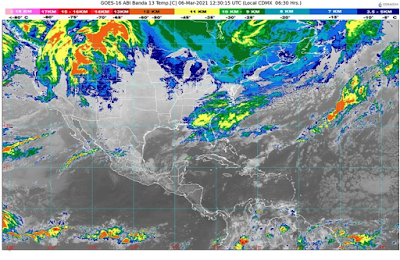 Photo from the North Beach webcam 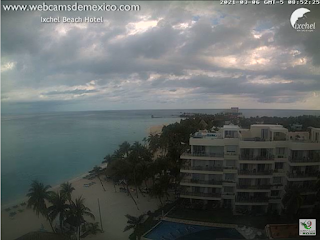 Miriam Trejo León, municipal Secretary General, said that 18 city officials completed a 20-hour course on Gender and Culture and received recognition from the Secretary of Public Education (SEP) through the Institute for Work Training (ICAT).

The youths of Isla Mujeres were invited to participate in a webinar as part of the International Day of Non-Discrimination on Friday at 7p entitled Youth Diversity and the World of Drag. The Director of the municipal Department of Youth, Culture and Sports, Rubi Lora Sosa, said the goal is to have more in-depth knowledge about the issue of diversity and the drag world, as well as to discuss the human rights of youths and the LGBTQ community. The event was scheduled to be held via ZOOM and Facebook Live.

TV Isla Mujeres reports that while other municipalities experienced an increase in tortilla prices in January, this will not happen in Isla Mujeres until next week . The increases are secondary to increases in costs for maseca (processed cornmeal), freight and propane, which has increased twice in the past four weeks. The cost of a kilo of tortillas will increase to 24 pesos with wrapping, 23 pesos without, and the dough will remain at 17 pesos per kilo .LINK

The US embassy site for Mexico published: "U.S. citizens should reconsider Spring Break and other non-essential travel to Mexico due to COVID-19.  Cases and hospitalizations remain high in most of Mexico."  (Note: Hospital occupancy rates are 7% and 9% in Quintana Roo.). TV Isla Mujeres notes that the US has had more than 28 million cases and 522,188 deaths while Mexico has had more than 2,112,000 infections and 188,866 deaths. LINK

VIDEO whose title says "She fled". Preceding the video are photos of a man lying in the street (with other residents standing by and providing shade) noting the accident had just happened on Jesus Martinez Ross, near the police station.
The video's caption says the municipal police stopped a tourist driving a golf cart after she had (allegedly) caused an accident where a person was injured. This occurred in colonia Salina Chica, leaving the person lying in the road, while she took the opportunity to flee. The tourist was located, arrested and transported in a police patrol car to the police station for determination of responsibilities.
The first commenter notes the victim is her father, and expresses concern that the driver might be quickly released because she is a tourist. A couple comments express concern about the lack of a translator on the scene, saying someone should be able to explain to her why she is being arrested, with responses that there will be a translator at the police station "to remind her". Another commenter notes that it is unusual for tourists involved in accidents to be arrested like this. In the video, she claims she did not hit the person.

Public events have generally been suspended due to C-19. Some holidays have featured online competitions and events.