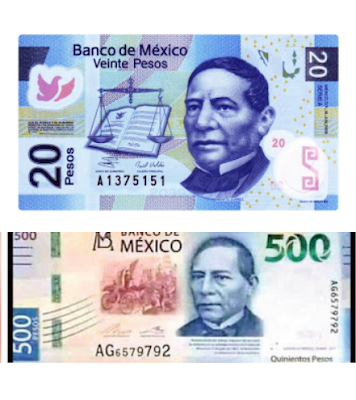 For March 14, the municipality of Isla Mujeres continued to report a total of 276 cases, 25 deaths and 231 recovered.

There have only been two reported cases of C-19 in the past month in Isla Mujeres, and no new deaths. The total was 274 on Feb. 13 and 276 March 14. The reported death total remained at 25, with the most recent reported Feb. 10th.
The seniors (60+) and some medical personnel received vaccines (AstraZeneca) three weeks ago, for a total of 1790. (Our population is in the vicinity of 20k, by official counts.)
Our Northern Zone has been in Yellow since Sept. 7, except four weeks in Orange Jan 25-Feb 22.

The state geoportal still has the data for March 12 which continued to report six active cases located as Meteorologcio-3, Salina Grande-1, Amp la Gloria-1, and colonia 006-1. It has been reporting that since February 10th, so it's probably outdated. 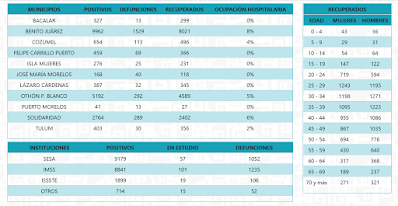 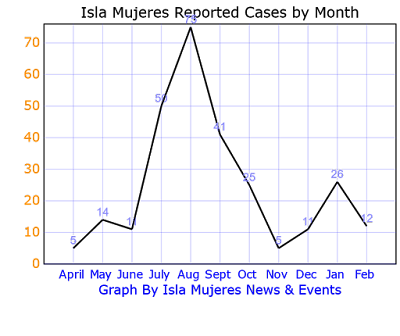 Today, March 15, the municipality of Isla Mujeres continues to report a total of 276 cases, 25 deaths and 231 recovered. The Growth Rate of cases for our Northern Zone has decreased from 0.18 to 0.15.
The state geoportal for March 15 continues to report six active cases located as Meteorologcio-3, Salina Grande-1, Amp la Gloria-1, and colonia 006-1. It has been reporting that since February 10th, so it's probably outdated. 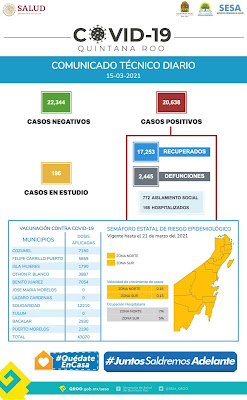 The municipal government of Isla Mujeres invites the populace to participate in the "Race for Isla Mujeres 2021" which will be held next Saturday, March 27 along the eastern malecon, following recommended health protocols. The 5km & 10km race will begin at 7am by the "Isla Mujeres" photo op sign behind the Casa de la Cultura downtown (intersection of Guerrero & Abasolo).
Registration is free, and the only requirement is to fill out a form with the participant's personal information, at the Department of Sport and Physical Culture or the contact number is 998 302 4182.
Anyone can sign up, but the number will be limited due to the need to follow health protocols in the face of the C-19 pandemic that we are still going thru, said Oswaldo González Barredo, Director of the municipal Sport & Physical Culture Department. The event will be carried out in compliance with all hygiene and healthy distancing measures, and is intended to continue the economic recovery of the municipality in a responsible manner, he said. 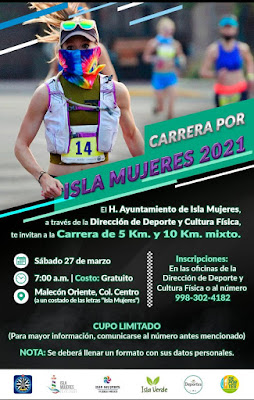 Location of the office of Sport & Physical Culture. 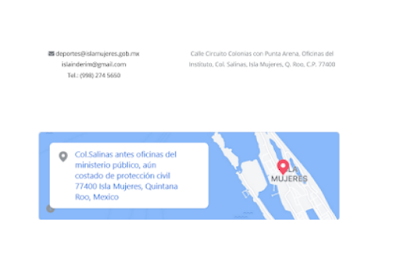 The municipal government reports that it is working to keep its commitment to maintain the beaches of Isla Mujeres in optimal condition, via the ZOFEMAT (Federal Zone) agency. The Director of the agency, Kerem Pinto Aguilar, said that although the sargasso arrival season has begun, it is removed almost immediately to preserve the beauty of our beaches. She said the crews start early and work diligently. She noted that there has been normal amounts so far this season and said hopefully there won't be the large amounts that have occurred in previous years. 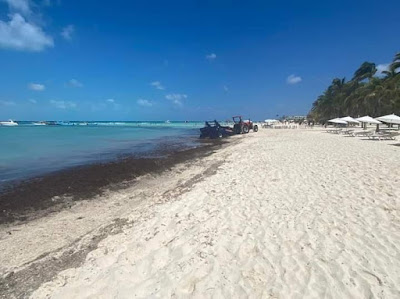 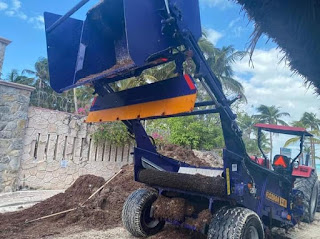 The Director of the municipal DIF social service agency, Yusely Lopez Tec said the newborn who was found abandoned in a doorway on March 10th was transferred to a hospital in Cancun on Friday to receive a blood culture test that isn't available on the island. The infant was transported with support of medical personnel from the Community Hospital and paramedics, and she was accompanied by staff with the Procuraduría de la Defensa del Menor y la Familia, Child Protection agency.

Ms Lopez Tec said it is important to do this study and others while taking advantage of her being in a better place to be cared for and recover from the infection that was shown in her tests. At the time a tourist couple found the newborn, she was wrapped in a blanket, abandoned on the welcome mat of home, still with the placenta, blood, and dirt. The director said that despite the infection, she is stable, and in the custody of the state DIF who will transfer her when her health is recovered, to the home-institution in Chetumal where they will be in charge of caring for her and the adoption process.

The official spoke about the many couples interested in adopting who have not had the joy of having children of their own, noting that it is necessary to be sure they meet the requirements and indicate that they would give their unconditional love, which this little girl or any other child deserves.