Isla Mujeres History on Facebook & Website
~How the "Conquest of Mexico" began in Isla Mujeres 504 years ago~
Today Isla Mujeres commemorates the 504th Anniversary of the expedition of Francisco Hernández de Córdoba landing on Isla Mujeres, after being blown off-course in a "norte". He is credited with discovering the Yucatan and what is now Mexico, after landing on this uninhabited isle. They named it for the icons of women they found in a temple, left in honor of the Mayan goddess of fertility, Ixchel. They replaced the half-garbed statues with an icon of Mary.
The expedition of 110 men in three boats came from Cuba and sailed north around the coast, battling with the Maya, until all but one were injured, and over 50 had died. The uninjured man disappeared when they stopped off in Florida and Cordoba died a couple weeks after returning to Cuba.
Although in modern times, Cuban refugees have frequently landed on the eastern shores of Isla Mujeres in tiny makeshift boats, these Spanish explorers didn't cross the ~100 miles of open sea until a quarter century after Cuba was discovered.
There are discrepancies among the various accounts of the voyage, all written by non-participants, except one who penned his version nearly fifty years later, but it's generally accepted that the expedition was motivated by a need for slave labor in Cuba, as well as a desire for exploration and gold.
Their first battle was in the municipality of Isla Mujeres, north of the island at Cape Catoche, aka "Where the Conquest of Mexico Began". They captured two Mayans, baptized them, and took them back to Cuba to be trained as translators.
Before they landed on the island, they thought they were going to die in the 'norte' storm. Then they were flabbergasted by the sophisticated buildings they saw along the coast, which they compared to the fine architecture of Seville, Spain.
Although the Spanish lacked awareness of the sophistication of the Mayan culture, which differed considerably from the other indigenous people in the Caribbean who lived in huts, this wasn't their first encounter with them. In 1502, Christopher Columbus came across a large Mayan merchant canoe in the Bay Islands of the Gulf of Honduras, full of trade goods and presumably from the Yucatan. Its ~40 passengers included well dressed merchants, their families, and about 25 oarsmen. It was eight feet wide, 'as long as a galley' (~50ft), with a covered area in the middle that protected the women, children, and goods. He compared it a Venetian gondola and was impressed with their seamanship. Mayan murals display boats with raised, curved bows and sterns.
Columbus considered these Mayans to be more civilized because they were clothed, unlike natives of the Caribbean islands. He described their fine textiles, weapons made of flint (probably actually obsidian), and copper goods including cups, bells and hatchets, which ended up in his possession. The Mayan merchants carried a type of beer made from fermented corn, which young Fernando Columbus enjoyed.
A cabin boy on that voyage, Antón de Alaminos, was the main pilot on the 1517 Hernandez expedition that 'discovered' Isla Mujeres fifteen years later. The following year, Alaminos piloted another expedition to Yucatan and named the peninsula "Isla Rica", thinking it was an island, before joining Hernán Cortés on a trip that culminated in the Conquest of Mexico.
When the Cortes expedition came to Yucatan in 1519, they learned there were two bearded men living among the Maya, who turned out to be Spanish survivors of a shipwreck in 1511. Originally, there had been about 15 people aboard (one account says 16 men and 2 women) traveling from Panama to Santo Domingo (Dominican Republic). They drifted in a lifeboat until currents brought them to the coast of what is now Quintana Roo, where the Maya sacrificed some and put others in cages.
Eight years later when Cortes arrived, he found that one of the two remaining survivors, Gonzalo Guerrero, had "gone native", becoming a military leader, marrying the daughter of a Mayan official, and fathering the first mestizo children of Mexico. It's said that his expertise was instrumental in the bloody battle of Champoton in 1517, where Hernandez received his fatal wound and many of his soldiers died. The extensively tattooed Guerrero expressed a preference for his current life and staying with his family, declining to join Cortes and his army.
The other survivor, Jeronimo de Aguilar, was a priest who'd escaped his first captors to become the slave of a rival Mayan leader. Some say that his life was spared because he carried a "Book of Hours" (Horarium) which were only possessed by priests and nobles in those days before printing presses. It's said the Maya had high regard for those who carried books. Aguilar accepted Cortes' offer and became his personal translator, playing an important role in his campaign.
Since the Maya had known about the Spanish since 1511 and 1502, it is likely that the arrival of the Europeans was not unexpected when Hernandez landed in early March of 1517. Ten months later, the Pope ordered a church be built to establish the Yucatan diocese, and the Boca Iglesia church was constructed just up the coast near Cape Catoche, presumably using stones from the Mayan temple they'd looted on their first visit. Its status as the first church in Mexico is tarnished by the fact that it lacked a priest, since the one the Pope assigned went elsewhere, purportedly due to the isolation of the site.
The Spanish encountered many challenges attempting to control and settle the region; the terrain was difficult, the inhabitants hostile, and in 1537, the Spanish government acknowledged that the Caribbean was infested with pirates. After a smallpox epidemic decimated the Mayan population, the Conquistadors successfully conquered the Yucatan in 1546, including the chiefdom of Ekab, where Isla Mujeres and Cozumel were located.
Written by Ronda Winn-Roberts for
Isla Mujeres History
sponsored by
Maravilla Caribe Bed & Beach.
Photo is Francisco Hernandez de Cordoba.

Wednesday, the state reported that 1790 doses of vaccine against C-19 have been administered in the municipality of Isla Mujeres. The state geoportal still has the data for March 2nd, reporting 6 active cases on the island. On the national map for 3/3, the municipality continues to report 275 positives and 25 deaths. 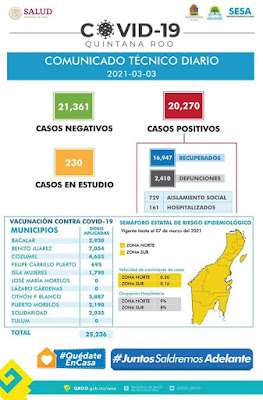 Today the report is the same. The state geoportal report for March 4 continues to report the same 6 active cases.  Now I am getting the data on municipal positives and deaths from the national map, which lags by a day, usually. 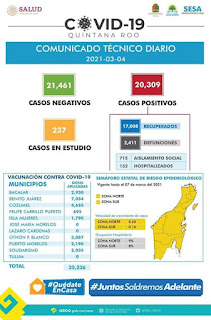 Tonight the Governor reported that our Northern Zone remains in Yellow on the state epidemiological light for March 8-14. All seven municipalities in our Zone showed decreases on the graphs and our zone's Growth Rate of Cases decreased to 0.9. The Southern Zone also remained in Yellow, and their Growth Rate is 0.86. He said when this rate decreases to 0.5, the color will change to Green.
The only graph with an increase is Bacalar in the Southern Zone. Holbox is Lazaro Cardenas, Cancun is in Benito Juarez and Playa del Carmen is in Solidaridad. 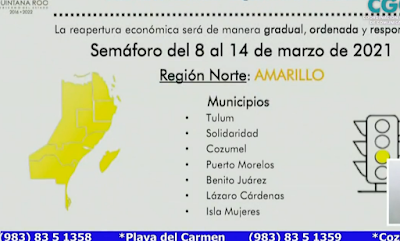 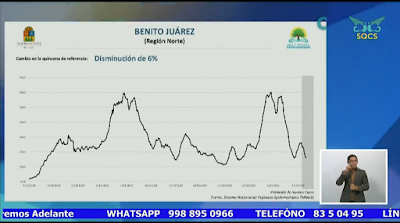 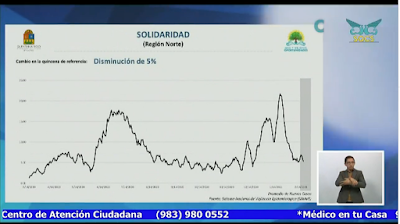 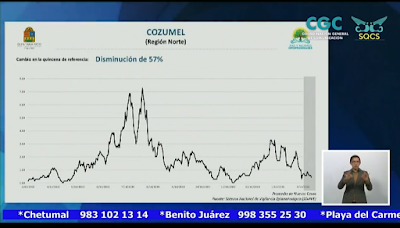 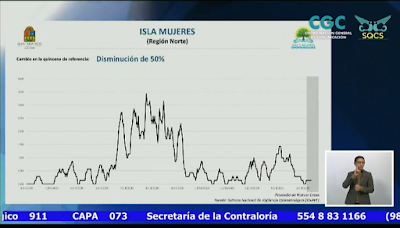 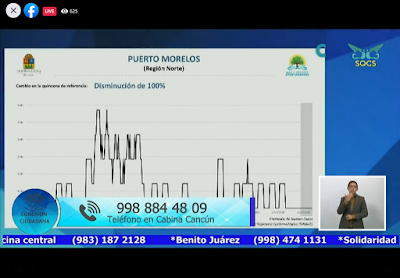 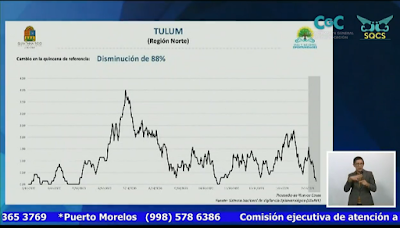 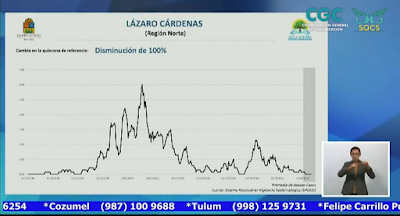 Conference on the 504th anniversary of the encounter between two cultures by Isla Mujeres historian Fidel Villanueva Madrid at 6p.

Today the municipal government inaugurated another mobile testing unit for C-19, which is located on Rueda Medina Avenue. It will be open seven days a week, 8a to 8p, with results provided the same day. A city official said the Marko Test Zone laboratories will offer PCR, antigen and IGG & IGM (antibody) tests at affordable prices. She reminded everyone to continue following protocols to avoid contagion and noted that the laboratory will enforce these preventative measures. 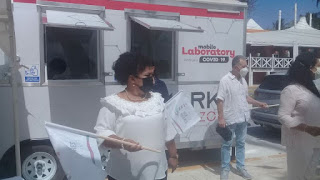 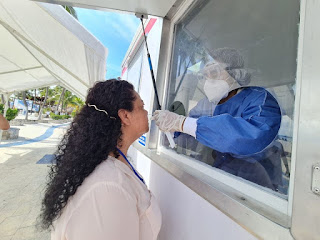 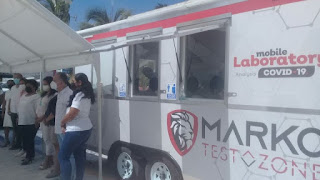 With the beginning of sargasso season, ZOFEMAT (Federal Zone agency) announced that they are ready to deal with this phenomena. The head of the agency in Isla Mujeres, Kerem Pinto Aguilar explained that having special machinery for this task makes the work more efficient for the ZOFEMAT personnel, who clean the beaches daily. She said the according to the forecasts announced by the Naval Secretary, very little sargasso is expected to arrive this year. 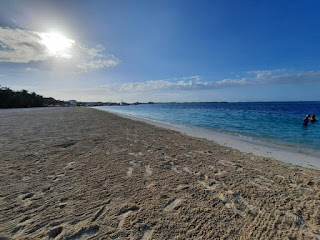 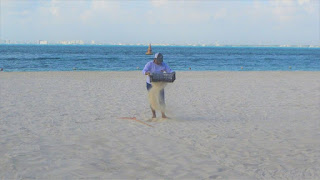 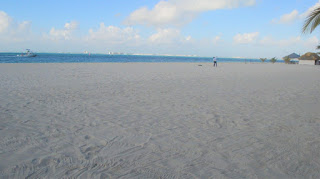 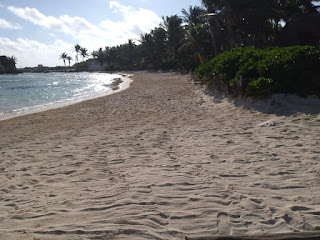 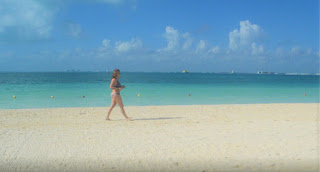 With the state epidemiological light in Yellow the municipal physical rehabilitation facility (CRIM) is open and operating at fifty percent capacity, with healthy distancing and strict hygiene measures, as well as screening at the entrance. Sometimes they can provide home care, and residents can contact them at 2742621 for appointments or more information. 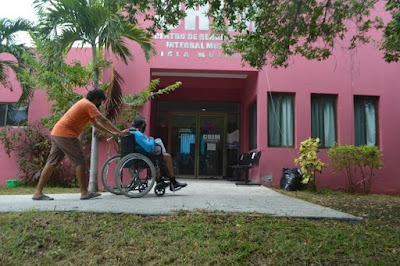 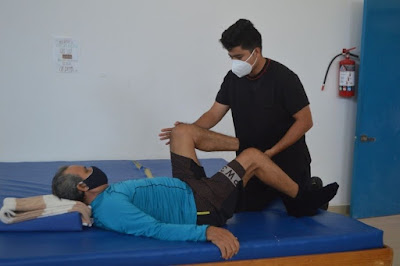 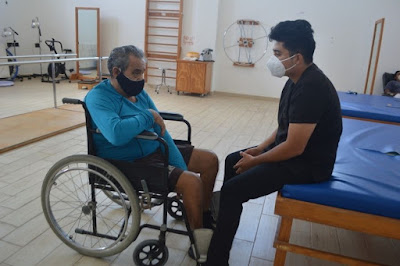