Juana Inez de la Cruz is considered the first published feminist of the New World, a national icon of Mexico, & a pretty unusual nun. She was a self taught scholar & acclaimed writer, born out of wedlock in the mid 1600's to a Spanish father & a Creole mother, near Mexico City.
She composed her first poem at age 8, studied Greek logic by adolescence, and was teaching Latin to young children at age 13. She learned the Aztec language Nahuatl and wrote short poems in that language. She gained the patronage of the Viceroy of New Spain, who requested that a panel of scholars test her intelligence and knowledge when she was 17, and her skills became widely known throughout Mexico.
Although her beauty and reputation attracted a great deal of attention, she opted to become a nun, "to have no fixed occupation which might curtail my freedom to study". She entered a convent at 21, where she remained until she died of the plague in her mid 40's, after caring for her fellow sisters.
She amassed a library at the convent, where her room was filled with scientific instruments, books and maps. She was often able to talk with scholars from the Court and University, and her studies included the natural sciences, music, and philosophy. She read tirelessly, and wrote poems and plays that often challenged societal values. She became an early proponent of women's rights and was often criticized by her political and religious superiors.
She is renown for her mastery of the full range of poetic forms and themes of the Spanish Golden age, unlimited by genre, including dramatic, comedic, and scholarly works, both secular and non secular, which display wit, inventiveness, and a wide range of knowledge
She is well known for defending women's rights to educational access in "Respuesta a Sor Filotea", where she justified her study of secular topics as necessary for understanding theology, and noted, "One can perfectly well philosophize while cooking supper".
......and for being on the $200 peso bill.
Happy International Women's Day!! A good day to remember some of the amazing women who blazed trails!
For March 8th, our municipality reported two more cases for a total of 277 positives with 25 deaths and 230 recovered. The state geoportal for March 8 continues to report 6 active cases as: Meteorologcio-3, Salina Grande-1, Amp la Gloria-1, and colonia 006-1....which it has been reporting since February 10th, which was 26 days ago indicating to me that this information is probably outdated.
The Growth Rate of cases in our Northern Zone has decreased from 0.20 last week to 0.18.
The state report for March 8th shows an increase in vaccinations statewide from 25,236 yesterday to 26,311 today. The statewide total of cases went from 20,378 to 20,415, which is an increase of 37 cases. Deaths statewide increased by six from 2425 to 2431. Yesterday. statewide hospitalizations decreased by two to 153. 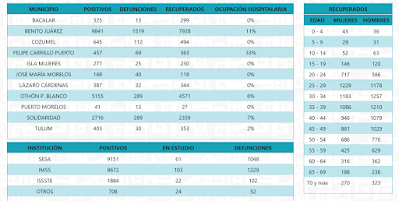 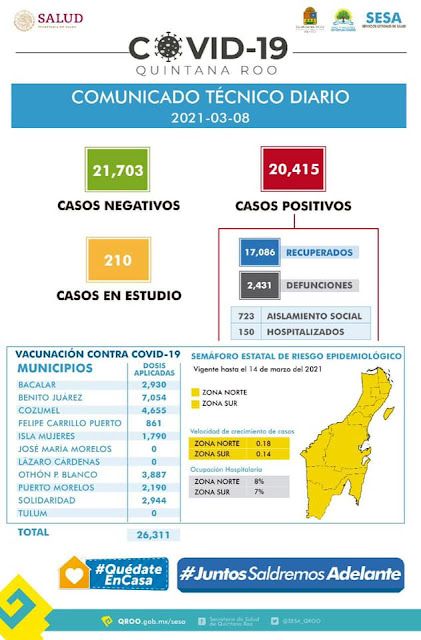 To commemorate International Women's Day, the municipal police department hosted a breakfast for policewomen recognizing their great work and contribution to a better society. The chief of police, Eduardo Fouilloux Battaller, gave recognition to their work in different areas of the department and urged them to claim their women's rights every day.

In commemoration of International Women's Day, the municipal government gave recognition to all women for their great work in building a better society, working from the trenches, and especially to those in the health sector of the municipality, who have been on the front lines (al “pie del cañón")in the fight against coronavirus. One official spoke about the great work of all women, who must often leave their families to go to work and prove their help (su granito de arena, lit. grain of sand) to improve social change. The municipal Secretary General, Miriam Trejo Leon, said that on this day when recognition is given for the fight of women for their participation within society, the municipal government delivered recognition to 25 women working in the health sector of the municipality.

As part of the preventative actions against C-19, the “Guardianes por Quintana Roo” campaign has begun to promote health care with measures such as temperature checks and application of antibacterial gel at the main entrance to the island. These activities will be carried out at the state Port Administration (API) Maritime Terminal on the island and at the "Black Pearl" pier (on the mainland). The "Yellow Hats" will continue their work at the photo-op area by the Casa de la Cultura and at the Maritime Terminal.

The municipal Secretary General, Miriam Trejo Leon said that the municipal and state governments are working together, seeking to advance the color of the epidemiological light toward a greater recovery of activities and the economy, but this will only be achieved by taking care of ourselves by following preventative measures. She said although vaccination of older adults has begun, the best tools for avoiding contracting C-19 are hygiene protocols including correct and constant use of face masks, avoiding physical greetings, frequent hand washing, avoiding agglomerations,and frequent hand washing. "As a society, we must commit ourselves to taking this disease seriously and continue to take care of ourselves, continue caring for the sectors that are considered vulnerable, continue with hygiene habits, not neglect handwashing, wear face masks, and avoid visits that are numerous (visitas numerosas) because this is the only way we will move forward," she concluded.

On Saturday, Ariel Peniche Rodríguez (aka Fishman) was elected as General Secretary of the Isla Mujeres taxi union, “Gustavo Díaz Ordaz”, replacing José Magaña Galué, and on Monday delivery began of the documentation and financial information. He said he plans to resume many pending projects such as the colonia of the taxi drivers (on the mainland). He noted there are many problems with the golf carts, the buses, and the Cancun taxi drivers, among others. He explained that, unfortunately due to the pandemic, finances have been affected, which has reduced the receipt of resources. LINK

Registration has concluded for municipal Mayoral candidates with the state Electoral Institute. (The election will be Sunday, June 6th, and the term is three years.) There are five female candidates for President of Isla Mujeres and one male, who are: