Today's Saturday's forecast says the 'norte' Cold Front #35 is expected to cause squalls with rain & cloudiness, winds gusting to 40-50 kph, and cooler temperatures. The orange circles indicate rain, the purple squigglies are wind, the blue-flagged line is a frontal system & red bumps mean its stationary. Cold Front #36 is expected to influence our weather later this week. 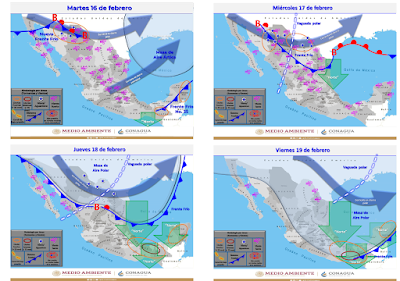 On Monday, Isla Mujeres continued to report a total of 274 cases of C-19 with 25 deaths and 226 recovered. The state geoportal for February 15th continues to report 6 active cases in Isla Mujeres as: Meteorologcio-3, Salina Grande-1, Amp la Gloria-1, and colonia 006-1. The Growth Rate of Cases in our Northern Zone has decreased to 0.32 from 0.48, and it was 0.53 the week before that. Before that, we'd stayed under 0.30 since mid-October. 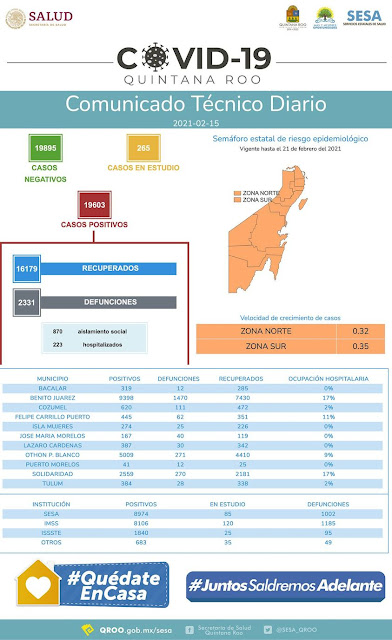 On Tuesday, Isla Mujeres continued to report a total of 274 cases of C-19 with 25 deaths and now there are 227 recovered. The state geoportal for February 16th continues to report 6 active cases in Isla Mujeres as: Meteorologcio-3, Salina Grande-1, Amp la Gloria-1, and colonia 006-1.

The gas station along the Caribbean was closed due to remodeling, which caused long lines at the station downtown.

Property Tax discounts continue only until the end of February.

Traffic police established checkpoints to invite islanders to get their vehicle paperwork up to date, as well as implementing health measures for both visitors and residents. 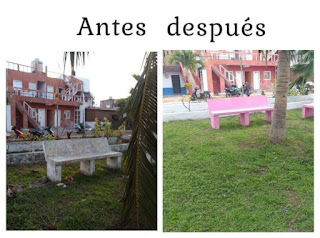 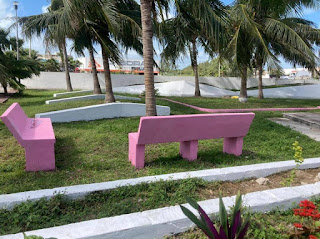 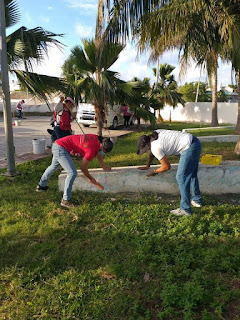 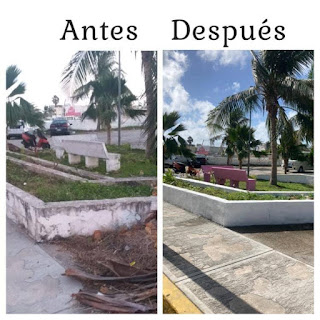 The Director of the municipal Department of Parks, Gardens and Potholes,  Pedro Canché Cardeña said as part of this administration's commitment to a healthy, green and environmentally friendly municipality, his department has been trimming, pruning and removing brush from the parks, walking paths and medians. He said in the past week they have attended to the colonias of
“La Gloria”, “Caridad del Cobre”, and “Electricistas”, as well as the parks “Las Gaviotas”, “Las Hormiguitas”,  and the Community Center. He said, "Work has been underway to keep these recreational spaces in optimal condition, so that when the state epidemiological light permits, island families and visitors can enjoy clean parks and gardens. He asked residents not to put their trash in the medians, to maintain a good image in the streets, and not to allow their pets to defecate in the streets, planters and medians.

TV Isla Mujeres reports that the Mobility Institute (IMOVEQROO) confirmed that the Isleno Bus company doesn't have permits to offer guided tours. VIDEO    of interview with official who also responds to questions about capacities on public transport, which is 50% on the buses and taxis. For the taxis, this means one driver in the front and two passengers in the back, maximum.

TV Isla Mujeres reports with a video that two people crashed head-on while driving their motorcycles last night in colonia El Cañotal. One suffered a fractured leg and the other a fractured arm. It is alleged that one of them was under the influence of alcohol.

TV Isla Mujeres reports: Due to the pandemic, the Catholic Church will be conducting Ash Wednesday differently, without touching the parishioners, who are expected to comply with local, state and national health measures. Also, the phrase "Remember that dust you are and into dust you will become" or "repent and believe in the gospel" will be pronounced only once for the general congregation. Those who are vulnerable are encouraged to stay at home and watch online, and they can send a family member to the church to obtain ash to be applied to their head.  Father Raúl Sánchez Alonso, explained that the times for the Masses for Ash Wednesday will be the same as on Sundays: 8am at the Chapel of Guadalupe in colonia Salinas, 10am at the downtown Virgin of the Immaculate Conception church, at noon at Sagrado Corazón in colonia La Gloria, at 5pm at colonia Caridad del Cobre, and at 7pm at Sagrado Corazón.

La Tertulia reports that people waited in line for up to an hour at the downtown gas station on Rueda Medina Avenue, including taxi drivers, golf cart rental agency personnel, and motorcyclists. This was facilitated because people were waiting their turn and fishermen helped organize the traffic. The long lines were caused by closure of the other gas station along the Caribbean, which was undergoing remodeling.

La Tertulia's article about the procedures for Ash Wednesday notes the ashes will be put on (poured onto) the head of the parishioners and not put on their forehead, due to pandemic protocols. It is noted that the six weeks of Lent begin with Ash Wednesday, which is a time of penitence featuring prayer, forgiveness and fasting until Easter. This year Easter Week is March 28 to April 4.