On Friday, Isla Mujeres reported two more cases of C -19 for a total of 274 with 25 deaths and 226 recovered. The state geoportal still has the data for February 11th, which continues to report 6 active cases in Isla Mujeres as: Meteorologcio-3, Salina Grande-1, Amp la Gloria-1, and colonia 006-1. 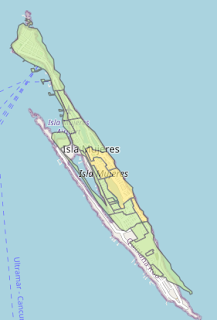 Saturday, Cold Front #35 is expected to interact with a low pressure system over the Yucatan Peninsula, causing rain while the cold front dissipates. 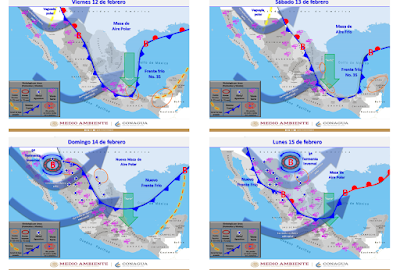 Last night when the Governor announced that the state would remain in Orange thru Feb. 21st, he said our Northern Zone showed a mild improvement, with the Contagion Rate moving close to 1. Since we moved to Orange on Jan 25, it was 1.11, dropping to 1.09 last week. When it is below 1 cases are decreasing and above 1, they are increasing.
He said the good news is the state's statistics are generally in descent and hospital occupancy is low. He shared these graphics with the decrease (Disminucion) or increase in new cases over the past 15 days summarized at the top and highlighted in Grey. The timeline begins after the state's first case on March 13th and ends on Feb. 2nd. Lock-down ended in June, and on Sept. 7th the Northern Zone moved moved to Yellow, opening the beaches & increasing tourism.
#2 is Cancun's municipality, the most populous, whose recent peaks the Governor blames on celebrations during the December holidays. #3 is Playa del Carmen's municipality, the second most populous, which hit an all-time high recently. Tulum showed a marked improvement, Cozumel is heading in the wrong direction, and Holbox (LC) and Puerto Morelos, the smallest municipalities, are currently doing the best, at zero. 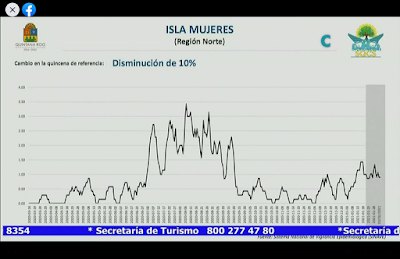 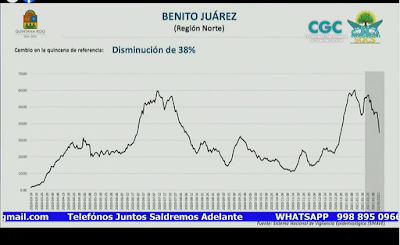 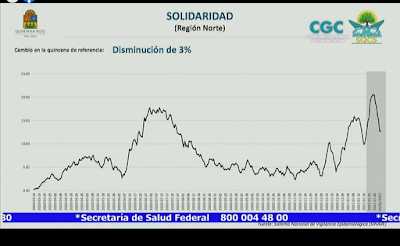 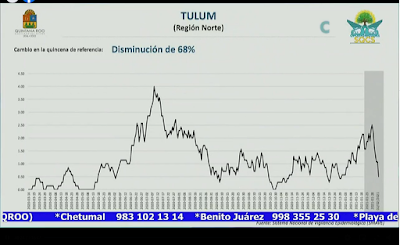 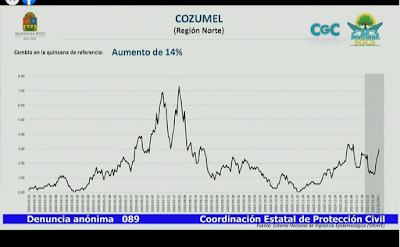 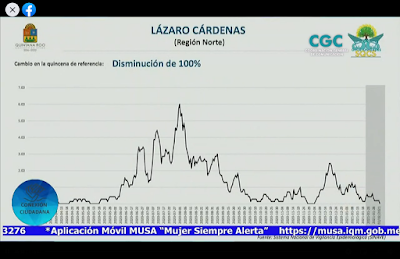 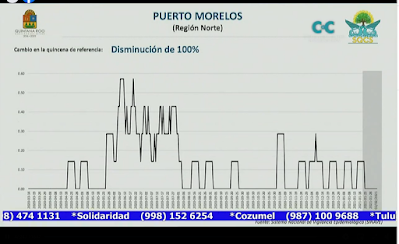 Aguakan explains that they treat wastewater and it is cleaned before they return it to the 'saline mantle' at 100 meters deep. They say it is false news and lies that they 'inject contaminated water into the saline mantle'. They clean wastewater at 14 treatment plants in Cancun, Isla Mujeres, Puerto Morelos and Playa del Carmen. Their page is here: 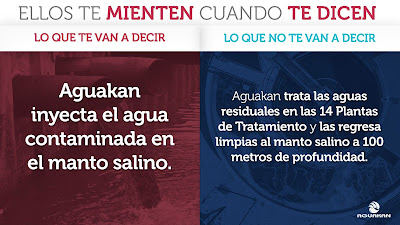 This year the annual "Collective Wedding" provided by the City for free were conducted as individual weddings with sanitary measures, and one couple represented them all symbolically, who  registered on the island and are 62 and 36 years old. A total of eight couples were married on the island with they oldest being 62 and 36 and the youngest being 18 and 25. In the Continental Zone, there were 13 registered with the oldest being 52 and 42, who will be married on Monday, Feb. 15.

The Navy announced that they have decided to cancel the shooting practice that was planned for Feb. 16-29 in the vicinity of Isla Contoy, north of isla Mujeres, which had been announced at the end of January. It was cancelled in response to concerns about the effects on the activities of the fishing community and concerns from various environmental organizations because this areas represents an important resource for the migration, reproduction, feeding and nesting of marine fauna.

TV Isla Mujeres reports that a small amount of infrastructure is being added to the overlook (at Punta Sur by Garrafon Park) which will include public bathrooms and a small restaurant in a palapa on the lower part of the slope to avoid obstructing the view. There will be a platform of just under 350 square meters, made from regional materials with a wooden deck as flooring, and a large photo-op sign saying "Isla Mujeres". 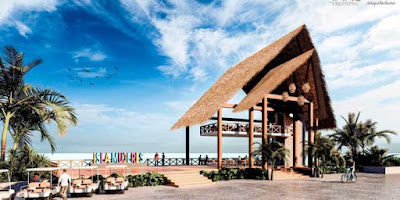 La Tertulia reports that concern is being expressed about work being done on the land in front of the panoramic overlook by Garrafon Park, which is one of the most photographed views on the island, enjoyed by residents and visitors alike. The mobile vendors at the site and cabbies who bring tourists there say it appears that a large palapa will be built which could obstruct the view, and visitors would no longer be able to have this experience and share their photographs when they return to their home countries, which serves to promote this Pueblo Magico. They want to know if permits have been obtained, and said they tried to question the person clearing the land, but he left. Tertulia notes that approximately two years ago a construction attempt was interrupted at this viewpoint after objections from residents. VIDEO 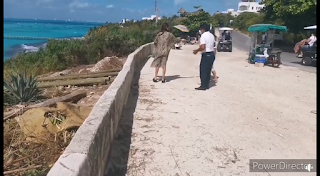 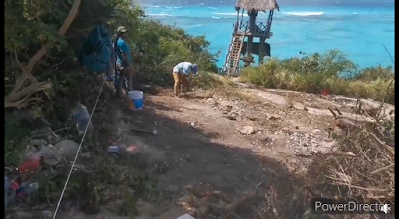 Foreign tourists encountered a boat along the eastern coast of Isla Mujeres with the markings "BB5188" containing about a dozen fuel containers and a motor that appears to be an old car engine. It is presumed to belong to undocumented Cuban "balseros", whose whereabouts are unknown. Photos by Val Jukosky.