Recognition of his life and work

Commemoration of the birth of Andres Quintana Roo led by Agapito 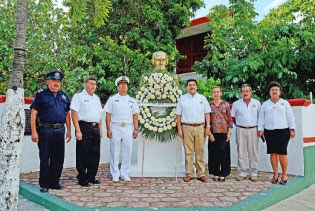 Lanrry PARRA
ISLA MUJERES, 30 de noviembre.-
Leer más...
The Mayor spoke about the moral obligation the Mexicans must assume to honor and remember the men and women who contributed their best efforts to create a nation like ours, with liberties and opportunities; a nation in which, as a society, we enjoy rights and obligations. He said this is not not just a civic tradition, it is a moral obligation. He talked about the lawyer and political insurgent Andrés Quintana Roo,  who was born in 1787. It is noted that the Isla Mujeres primary school "Andres Quintana Roo" is the oldest in the state, having opened  its doors fifty years ago, and this is the original building and campus, as is noted on a plaque. Several of the mayors who have governed the island went to school there, including the present mayor, Agapito Magana Sanchez. 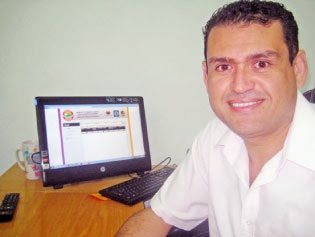 Lanrry PARRA
ISLA MUJERES, 30 de noviembre.-
Leer más...
This year about 150 students, from primary school to university level, will be receiving grants for the ferry transport costs. It is anticipated that next year grants for their land transportation costs on the mainland will be added. They are currently gathering information from the students. Some cross daily, some cross weekly, and other cross twice or three times a week to the mainland to attend various schools. 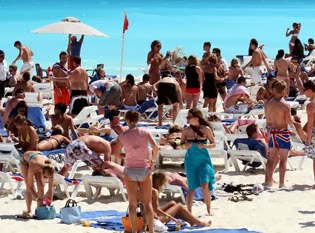 Lanrry PARRA
ISLA MUJERES, 30 de noviembre.- .
Leer más...
It has become official that the island will no longer have its own tourism promotional agency, and these responsibilities will be taken over by the Tourism Promotional Agency of the municipality of Benito Juarez  (Cancun). This news that Isla Mujeres will no longer have its own direct representation for national and international campaigns was not well accepted among local entrepreneurs, particularly those that have been working with the local Tourism Promotional Agency in recent years. It is anticipated that the owners of the smaller hotels will be the most affected, since they have few resources for promotional campaigns or representation at the various tourism fairs, and even less on an international level. This also affects the diving shops,as well as those who do whale shark tours, who are now responsible for the costs of promotion individually.

Sorry, I don't have time to translate this now.

History of the Virgin of Immaculate Conception in the Island

Restaurants are beginning to prepare for the Christmas holidays with promotions, discounts, and special dishes, and they will be taking reservations with expectations of demand between 80 and 100 percent at Christmas and New Year. They are purchasing hams, turkeys, and ingredients for various seafood dishes such as bacalao a la vizcaina. (On New Years Day, some businesses may open later than usual.)

At the beginning of this administration, they inherited almost two thousand tonnes of trash that had accumulated at the Transfer Facility site, and assistance was given by the State government to reduce this backlog. However the problem of trucks that need repairs and maintenance has remained, and there are concerns because during the winter holidays the amount of trash increases up to 40 percent. 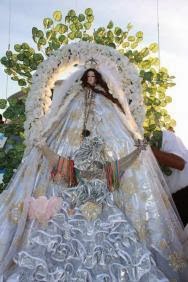 Yesterday the Youth Group had a procession in the streets of colonia El Cañotal, honoring the Patron Saint despite the cold. On this third day of the celebrations, the activities began at 7pm, and hundreds of devotees accompanied the religious image, in this tradition that has been carried out for more than a century.  The Children's group will celebrate on Sunday, as will the cooperative Justicia Social and the colonia Miraflores. On Wednesday there will be a Confirmation mass at 6pm.

At 7am on Saturday, the port was opened by the Harbor Master, and small vessels were allowed to navigate. Fishermen and nautical tour operators went back to work after four days without profit. The nautical tour providers are expecting increased demand on Sunday if the weather is good, especially among domestic tourists because some have already received their holiday bonuses.

The owner Guadalupe Trujillo and his daughter Cristina came to Isla Mujeres from Playa del Carmen to claim their 26 foot boat that washed up on the eastern shore here near the Casa de Cultura. It was stranded for four days in a rocky area and badly damaged by the large waves. They showed that they are its legal owners, and they are responsible for its removal, but will have to wait until the weather conditions improve, probably on Sunday. They said there was a jazz concert at the beach Mamita, near where it was kept, and it appears someone untied the rope and pulled the boat into the water. This boat was used for tours for snorkeling and other tourism activities, and its owner is a member of a cooperative in Playa del Carmen, but now it is not serviceable and has been badly damaged.

December Calendar of events....coming soon
Nov 28 Beginning of Festival for Town Saint through Dec 8: Virgin of Immaculate Conception   HERE is an article about the Festival
SEE THE BLOG POST FOR MONDAY 11/26 FOR MORE DETAILS ABOUT WHEN & WHERE ACTIVITIES ARE PLANNED>>>  LINK
On November 28th the celebration of the taking out of the Virgin is scheduled to begin at 7pm with the Mass celebrating taking her down from her niche., Then a procession will take her through the streets downtown, and the event will end with a Kermes and dance in honor of the Patron Saint.
On December 4th the Confirmation Mass will be at 6pm.
On Saturday, December 7th the Paseo de Virgin will take begin at 7pm at the parish and go through the colonias and conclude with the singing of Las Manitas at the Church of Immaculate Conception downtown at ~10-10:30p
On December 8th at 3pm a procession will leave the parish of Immaculate Conception for the procession on the Bay, and there will be three large boats available for parishioners. There will be a grand Kermes, and then the Patron Saint will be returned to her niche. Father Jesus Martinez Penilla will celebrate the 50th anniversary of his priesthood.
.

Morning rainbow over Isla from the roof top