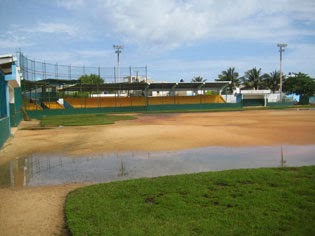 .
Lanrry PARRA
ISLA MUJERES, 15 de diciembre.-
Leer más...
The funds are coming from the Commission for Youth and Sport in Quintana Roo ( Comisión de la Juventud y el Deporte en Quintana Roo), and the work will be done in the first months of 2014. It will include raising the level of the playing field, to prevent further flooding. The head of the commission, Martín Antonio Cobos Villalobos, said they are in the process of analysis for the construction of a sports center on the site that is now the blue dome of the Habitat plaza in Canotal. The sports complex will include grandstands, bathrooms, locker rooms, and will be used exclusively for sports, while the Convention Center will be used for social activities. 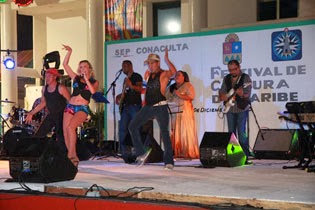 Lanrry PARRA
ISLA MUJERES, 15 de diciembre.-
Leer más...
After a long wait for this festival of the senses, (This year's municipal Caribbean Culture festival, previously held in November, was canceled. The festival this weekend is the state sponsored version.) last night the municipal plaza was filled with rhythms, cadences, and color from all four directions when the Caribbean music began at 8pm. The Mayor thanked the performers for this State sponsored festival, through the Ministry of Culture, who each year send representatives of different Caribbean arts such as literature, film, theater, music, and dance to the ten municipalities of the state.The sounds of Cuba flooded the square and were enjoyed in a great evening that lasted several hours.
Expecting 100% occupancy during Christmas & New Year holidays

Lanrry PARRA
ISLA MUJERES, 15 de diciembre.- .
Leer más...
The Director of Tourism, Carmelina Martinez Hamed, said that while hotel occupancy  is currently at 55%, it is expected to reach 100% right before, during, and after the Christmas and New Year holidays. It is estimated that after the holidays, hotel occupancy will be between 85 and 95% during the first three months of 2014. There are 2569 hotels in the municipality of Isla Mujeres, of which 1563 are on the island, and and the other 1006 are on the Continental Zone, near Isla Blanca and Punta Sam. The most popular days are December 24, 25, 26, 30, 31, and the first day of January, when merchants are expected to benefit also.

Attendance of Bishop: Confirmed for ceremony

Lunes 16 de Diciembre de 2013 14:27 Jesús Molina DIARIO RESPUESTA
On Sunday, residents asked the reporter to witness foul smelling water that runs off beside the blue dome in La Gloria, near the mercado market. The reporter witnessed this at eleven o'clock, noting the water smelled badly and was gushing like a fountain. The merchants say this is not the first time, and that it is a deterrent to business, due to the smell, which is spread down the block when vehicles drive through the water.
.
Leer más...
Share

Rhythm and music at the Town Square

Merchants on Hidalgo Avenue (the pedestrian street) are displeased with the appearance of a bar module placed by a business into the street to sell their products, which the merchants say is not legal and requires official permission. The module is for the sale of wine and liquor, and is located at the corner of Hidalgo and Matamoros. The Secretary General of the City Council, César Poot Pérez, said they will look into the situation. 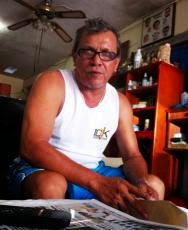 MaraVilla Caribe has the smaller studio available the 15th-21st at a special price of $40/nt.

A larger studio is available now, until Dec 29th as a special price of $300/wk.

Festivities for the Patron Saint, The Virgin of Immaculate Conception are Nov. 28-Dec 8
The religious image was moved to Isla Mujeres from the Boca Iglesia Church, where she has been honored annually for 102 years. HERE is an article about the Festival
Dec 4 Wednesday 6p Confirmation Mass at Catholic Church on Town Square
Dec 5 Thursday  4-7 Artist Fair Town Square (First Thursday of Each Month)
Dec 6 Friday  Security Operation Guadalupe-Reyes begins
Dec 7 Saturday 7p Procession of the Virgin through the colonias
~10p Singing Las Manitas, Mass Catholic Church on Town Square
Dec 8 Sunday 3p Procession from Church on Square to Bay, for procession on Bay with three large boats provided for parishioners. Followed by Grand Kermes, and returning of icon to her niche. Celebration of 50th anniversary of priesthood for Father Martinez.
Dec 12 Dia de Guadalupe, Patron Saint of Mexico. Festival at Chapel in Salina Chica
They have been setting up the circular stadium, along the Caribe road down south, which usually means a 'bullfight' with little people and heifers, where no one is harmed. There could be trained monkeys riding dogs, or circus animals, rides for the kids, and vendors.
Start of Guadalupe-Reyes Holiday period, which ends January 6th.

Dec 14 Saturday 5:30-8:30 Casa Sirena Benefit for Brazos Abiertos
Dec 16 -24  The Posadas
The Posadas are nine days before Christmas eve, when there are reenactments in neighborhoods (and a play on the town square) of Mary & Joseph being turned away, until they are accepted at one house, and there is a neighborhood party there.
During the posadas, there is usually a dance on the town square, featuring dances & costumes from different regions of Mexico
Dec 14 Saturday Caribbean Cultural Festival 8pm Town Square (Cuban band)
Dec 17 Tuesday 4-6  Brisas Grill  Benefit for Keys4Life
Dec 24  Noche Buena  Zapatos por los ninos party
Dec 25  Christmas
Dec 31 New Years Eve celebration on Town Square (Usually fireworks & dancing to live music until dawn. Reserved tables are sold by Tourism Department.)
~~~~~~~~~~~~~~~~~~~~~~~~~~~~~~~~~~~~
Charity Info
Donate some shoes? You can drop them off at Barlitos! If you aren't coming before this event, your donations of shoes or money are always welcome and needed!
ZAPATOS PARA LOS NINOS   Shoes for the Children Annual Christmas Party and Shoe Drive
December is here, and we are collecting shoes and donations for our annual Christmas Party and shoe delivery.  Last year every child that came for shoes walked away with a new pair for Christmas!
This is the one time of year we only collect new shoes in order to make each child feel extra special.
Not only do we distribute shoes, but we join with the local community to provide a meal and a small gift. It is a special event, as for some of the children, it will be their only Christmas gift. They are already looking forward to it on December 24th.
If you would like to donate shoes, please contact Greg Snider at: bullridersnider@yahoo.com
If you would like to contribute monies so we can purchase shoes, food, or small toys, please also contact Greg at the email address above or go to our website for Pay Pal http://www.islazapatos.blogspot.mx/   We will happily send you photos of the children who receive your gifts.   Greg and Natalie


Keys 4 Life  Benefit Event: Tuesday, Dec 17 Brisas Grill 4pm  A Christmas concert called "Secret Santa Christmas Celebration." by Ken Wanovich with buffet, beverage, & gift CD. $20 or 250p (link for tickets). Profits will be spent on toys, and Ken explains, "The concept is that we are the Secret Santa, giving gifts to the children through the parents, who cannot afford gifts for their own families." Ken Wanovich Posted a new song: "Give It Away" http://t.co/kevoDDRftu ‪#‎music‬

One of our regular Isla Mujeres Artist Fair participants, Nirit Ben David of Roots Clinic, has opened her Acupuncture/Chinese Medicine clinic in a new, convenient location in Centro! She is now taking appointments at the clinic in Plaza Isla Mujeres (between Hidalgo & Juarez, behind Dopi's Restaurant). Nirit will be at the January 2 Fair (Thursday 4pm-7pm), come down to meet her and learn more about her services in acupuncture, shiatsu, reiki, moxibustion, and more!

My outside kitties trying to stay dry, pobrecitos

Daily Update: So all the puppies are doing well so far. We’re still in the danger zone because they’re all from the streets and I don’t feel like I have an “all clear” on parvo or distemper until three weeks have passed. There are only three that I’m worried about but I’m filling them with vitamins and immune boosters and making sure that they keep eating. I love this picture. I think I should make a clock out of it. I can’t believe how perfectly they are spread out. My friend Alex gave me these dishes and they are the best thing for feeding pups. Thank you so much to Ashley for raising our monthly donations to $1420.00, we will get there. http://islaanimals.org/help/donate-animal-rescue-isla-animals.html

Dear friends, this year we have realized several events and for such a motive we want to be grateful for your support, with much enthusiasm we have reached three years of achievements, but specifically of Helping the Island Women, we will realize the traditional "Posada Rosa", the dynamic is a very simple you can meet some friends and bring some botanas (snacks) to share, we ask for a donation of 100.00 pesos for the Association to collect funds and to be able to continue helping, the principal aim is to have an entertaining night with all, we will be grateful for your unconditional help to all. You are cordially invited !

My Photos this week...

These are from Saturday. The second two are from Iguana's at Marina Paraiso. The first one might be from the Soggy Peso 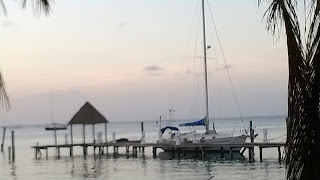 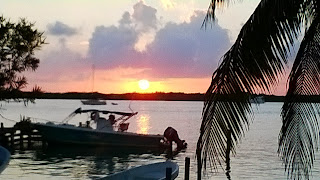 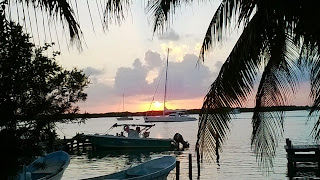 And these are from Tuesday at sunrise, back balcony MVC B&B..looking south, north, up. 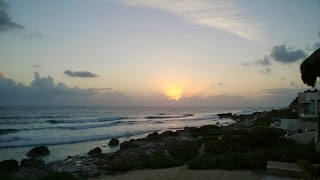 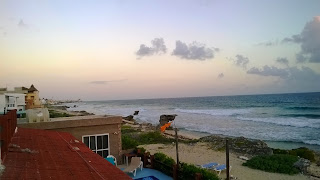 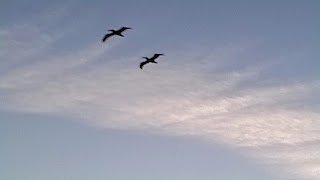