Check out the Preview Edition of Isla Mujeres Magazine

Now, you can find out what color underwear you should wear for New Year's, what's up with the grapes on NYE & how Mayans predict the year's weather in January  Here's the link


..This is the live webcam at North Beach / Playa Norte

Concern at Cooperative: Over changes in tax laws 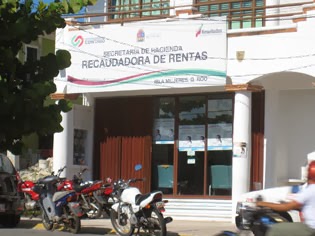 Lanrry PARRA
ISLA MUJERES, 25 de diciembre.- .
Leer más...
Ricardo Gaitan is a leader of an unnamed tourism service cooperative, who was leaving an unnamed bank, and said the cooperative's account had been terminated. He said a similar event happened to an account at HSBC bank. He said this behavior by the bank could represent upcoming chaos. The reporter associates the account closures with the recently passed tax reform. It is noted that there are entrepreneurs who are concerned about the lack of information about tax law changes which go into effect in January, 2014.

Lanrry PARRA
ISLA MUJERES, 25 de diciembre.-
Leer más...
A campaign is being launched and paid for by NGO's with the cooperation of the CCDA ( Comité de Ciudadano y Defensa Animal / Citizens Animal Defense Committee) to raise awareness about animal rights by putting up posters and banners with  the regulations against animal abuse. The campaign will begin by displaying the posters in public buildings.

Jueves 26 de Diciembre de 2013 11:29 Jesús Molina DIARIO RESPUESTA
Leer más...
Share
When there was rain, the restaurants could not use their tables in the street, and many people did not go out during that time, which reduced their business, causing "large losses". (A loss usually means a lack of profit, not less profit than hoped for.)
Fiestas occur peacefully

Jueves 26 de Diciembre de 2013 10:32 Jesús Molina DIARIO RESPUESTA
There was a "saldo blanco" reported by the police  for Christmas Eve and the holidays thus far, with peacefulness, no disruptions of public order,  and a lack of crime or incidents.

Jueves 26 de Diciembre de 2013 10:31 Jesús Molina DIARIO RESPUESTA
An American boat was coming from the Florida to visit Isla Mujeres for the holidays and their mast broke in strong winds, leaving them adrift without communication. They put out flares, which were seen by an Asian freighter, who came to their assistance. We met these folks at Marina Paraiso after the event. The fellow talked about climbing up and down the side of the freighter ("like a ten story building") on a rope ladder in high seas, from his dingy. They were very grateful for the assistance they received.
The freighter called the US authorities, who notified the Mexican Navy, who sent out a vessel. The Navy towed them to a dock in Isla Mujeres, where British friends and a spouse awaited, and they arrived safe and sound.
Immigration will review their documents, as is usual. The reporter did not have their names.

The rain during the night and on Christmas morning left the island quiet and there were no incidents on the isle. There were no problems on land or sea, and increased surveillance will continue through January sixth. Over a third of the fleet of over 400 rental golf carts are rented for multiple days, and can be seen parked outside hotels where the visitors who rented them are staying.

The Institute of Security and Social Services for State Workers (ISSSTE ) and the Mexican Social Security Institute (IMSS ) linics were closed for Christmas. A notice was placed at the ISSSTE saying they would be closed for several days, and the IMSS simply locked their doors. City workers, who are beneficiaries and  suffering respiratory infections, say they are going directly to the pharmacies for medications while the clinic is closed.
The reporter visited the General Hospital at 10am,  where the waiting room was empty, and they said they had seen less than ten patients since 6 am. They expected to see more people in upcoming hours, due to hangovers from holiday parties.

Speaking to hundreds of Catholics who attended Mass for Christmas, the priest at the Church of Immaculate Conception downtown said, "Living genuinely in love in these times is a challenge." He blessed the “Niños Dios”, and there was a reenactment of the birth of Christ.  The other Christian churches also had activities the coincided with the need to promote faith within families in order to have a healthy community in these difficult times in which exist in our country.

Festivities for the Patron Saint, The Virgin of Immaculate Conception are Nov. 28-Dec 8
The religious image was moved to Isla Mujeres from the Boca Iglesia Church, where she has been honored annually for 102 years. HERE is an article about the Festival
Dec 4 Wednesday 6p Confirmation Mass at Catholic Church on Town Square
Dec 5 Thursday  4-7 Artist Fair Town Square (First Thursday of Each Month)
Dec 6 Friday  Security Operation Guadalupe-Reyes begins
Dec 7 Saturday 7p Procession of the Virgin through the colonias
~10p Singing Las Manitas, Mass Catholic Church on Town Square
Dec 8 Sunday 3p Procession from Church on Square to Bay, for procession on Bay with three large boats provided for parishioners. Followed by Grand Kermes, and returning of icon to her niche. Celebration of 50th anniversary of priesthood for Father Martinez.
Dec 12 Dia de Guadalupe, Patron Saint of Mexico. Festival at Chapel in Salina Chica.

Start of Guadalupe-Reyes Holiday period, which ends January 6th.
Dec 14 Saturday 5:30-8:30 Casa Sirena Benefit for Brazos Abiertos
Dec 16 -24  The Posadas
The Posadas are nine days before Christmas eve, when there are reenactments in neighborhoods (and a play on the town square) of Mary & Joseph being turned away, until they are accepted at one house, and there is a neighborhood party there.
During the posadas, there is usually a dance on the town square, featuring dances & costumes from different regions of Mexico
Dec 14 Saturday Caribbean Cultural Festival 8pm Town Square (Cuban band)
Dec 18 Wednesday 4-6  Brisas Grill  Benefit for Keys4Life
Dec 21 Saturday
6p  Golf Cart Parade starting just south of MaraVilla Caribe, near Hotelito Ixchel, where the road gets very wide at the end of Aeropuerto before entering the first village of Salina Chica, just south of Colegio Bachilleres.Assemble at 5:30 and depart at 6. Decorated vehicles, Cartoon Characters & Santa's helpers tossing treats & visiting parks & kids around the isle. To benefit one of the Carnaval Dancing Troupes.
8p  Municipal Christmas Parade
4p-8p CHRISTMAS ART SHOW at ComoNo at el Patio, Gifts for sale
Dec 24  Noche Buena  Zapatos por los ninos party  (Don't be surprised if many places are closed in the evening so employees can spend it with their families) Dec 25  Christmas  Iguana's is serving Cornish Hens.   Casa de los Suenos is serving Christmas dinner. Thurs Dec 26: 7p  Iguanas at Marina Paraiso is bringing in Flamenco dancers. Last time they did this, it was very cool. They are also making special food.. lamb, veal & Paella for the event. (They've done lamb or veal before too and it was Very Good...and they ran out, so they know we're coming and eating! Paella is also a Sunday special there & very good.)

Friday, Dec 26  is the annual Quinceaneras w 16 young ladies & their entourages...probably having photoops in front of the church after the 7p Mass, the public is invited to the Grand Ball at the Taxi lodge, 20p.

Dec 31 New Years Eve celebration on Town Square (Usually fireworks & dancing to live music until dawn. Reserved tables are sold by Tourism Department or DIF who have been taking names, but not yet assigning tables or taking payments.)

Here's the link to January Events!