During this second sterilization event, a total of 475 pets were seen and cared for by the City of Isla Mujeres, Isla Animals association, and the Animal Care & Defense Committee (el Comité de Cuidado y Defensa Animal, CCDA). There were 225 sterilizations and 250 vaccines were administered.
In addition, there were baths for flea and tick prevention, with everything being provided for free, except a 50 peso charge for the triple vaccines against parvo virus, distemper, and heartworm. During the entire sterilization campaign they have attended to 280 pets, both cats and dogs, and the goal in 2014 is to sterilize 1000 pets, said the director of Ecology, Cristina Medina.
As part of this event, pet registration was also performed, and this census gathered information on 500 domestic animals, both cats and dogs. At the conclusion, recognition was given to the participants, the associations, and especially to  Alison Sawyer (Current) of the organization Isla Animals, for her important work in the realization of this program.
The Rabies Vaccination campaign will begin March 22 at the Las Iguanas park at 9am, in coordination with the Ministry of Health.

With fuel containers that landed along the coast 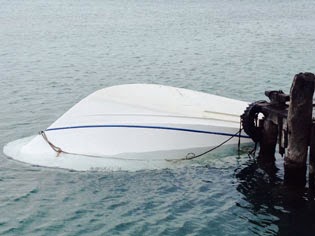 In the early hours of Saturday, there was a landfall of twenty-three 50 liter fuel containers, and a group of fishermen rescued a sunken boat about five nautical miles east of Isla Mujeres. The two events are presumed to be linked and to be associated with the illegal trafficking of undocumented Cubans. Both the Navy and the Municipal police are involved with the case, and the fishermen notified the Port Authority/Harbor Master.
The ~28 foot  boat is named the "Genesis", with registration FL-7330-TM. The fishermen said they were going out to start their day fishing when they saw the bow of the sunken vessel, without any people on board or nearby. They were unable to work that day because it was very difficult to tow the sunken vessel, and at that time they couldn't put it afloat. They brought it to the island still swamped, with two engines of at least 200 horsepower each.
The Harbormaster said the report about the boat came in around 9am, from the fishermen who found it, and he and his staff learned about the landfall of the fuel containers about two hours before, which are in the custody of the Municipal police.The fuel containers began washing up around four in the morning at Playa Luna, and various people removed some of the containers, so the exact number is unknown. It was told that in one case two containers were rescued and sold for 300 pesos each.
The unofficial story is that the boat had come from Cuba,  and around 11am on Friday, that one of its crew members, if not the only crew member, swam to the island for help, but the whereabouts of the boat were not found, until the fishermen came upon it fortuitously or accidentally.The fuel containers are presumed to have come from this boat.
The fishermen who rescued the boat are awaiting payment of a reward that supposedly exists, in the amount of 50,000 or 60,000 pesos, but it is alleged that now the owner is only agreeing to pay 10,000 pesos. The Navy, Police, and Harbor Master continue to investigate the case of the fuel containers that washed up and the boat that sank five nautical miles offshore.

At Convention Center: Starting at 9 am 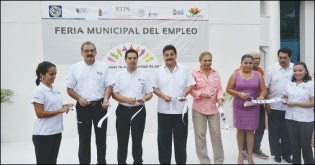 ISLA MUJERES, 17 de marzo.- .
Leer más...
This second Job Fair will be held at the Convention Center on Thursday, starting at 9am to link Islanders with vacancies of companies based in the municipality. The Mayor is offering this in response to the citizen's needs to have employment options. It is also part of the Sixth Conference of the State Employment Service & Work Training agency.
Sixteen Isla Mujeres companies are committed to participating in the Fair. Some are on the island and other are in the Continental Zone. The Mayor has made a commitment to provide grants for transport.  The previous one was held in November with a significant response from businesses and citizens.
Other services will be available at the Job Fair including haircuts, dental consults, psychological consults, medical consults, legal consults, and other services. All of the population of Isla Mujeres are invited to attend. Those looking for employment are reminded to bring their official documents including IFE, proof of address, and resume. 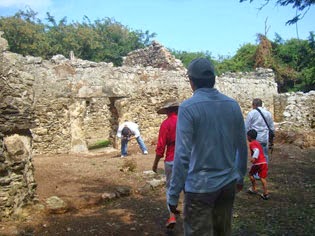 Lanrry PARRA
ISLA MUJERES, 17 de marzo.-Nearly 500 years after the last Mass was officiated at Boca Inglesias Church, a religious ceremony was held there last week, by priest Raul Sanches Alonso, involving various parishioners. The priest said at the time the Mass was officiated, he felt a strong gust of wind, as if to manifest the Holy Spirit, which was considered as a sign from God that gave permission for continued use of this place as His Home.
They also carried out some cleaning and rescue work at the old church, with historian Fidel Villanueva Madrid, and City workers. Sr Madrid said the last Mass was celebrated at the church in 1624, and there had been no religious acts there since, until last week.
To reach the church these days, one must travel across the sea aboard a small vessel, from Isla Mujeres or Punta Sam, for about an hour and a half of travel time. The areas is surrounded by fishing camps of fishermen who work in the areas of  Cayo Ratón, Cayo Sucio, Isla Blanca; and the Church is farther inland than the Cays.

This video included Fidel Villanueva Madrid and a priest and parishioners are Boca Iglesia & was published in December, by the municipal government

Boatmen lose out because port has been closed 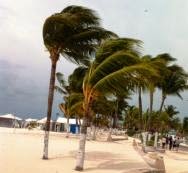 Cold Front # 43 caused rains on Monday at noon, after high winds from the opposite direction (south) prevented use of the beaches that face the bay. The phenomenon reversed the winds of over 40 km/hr, with the effects of the cold front on Tuesday. This adverse weather closed the port for the small boats, keeping the crews of the tour boats and the fishing boats idle until Wednesday. They hope the weather will improve so they can capture snapper, now that the ban has been lifted. In the case of members of the cooperative Patria y Progreso, they have now been inactive for two weeks, due to failure to obtain their federal permit, which had now been completed, according to the source consulted.
The National Weather Service (SMN) says the effects of Cold Front #43 could cause strong winds on Tuesday, with a relatively high chance of rain, and the forecast is that Cold Front #44 will much have fewer effects.
The southern winds have moved sand from the Posada Beach onto Rueda Medina malecon and street, and many tourists were on Playa Norte, where the effects were less.

The long weekend was "regular"

There are complaints from merchants that sales on this long holiday weekend were not exceptional, but were fairly normal. There are complaints about the informal street vendors. There are complaints about the web pages that promote Isla Mujeres were not maintained by the municipal Tourism Promotion agency (which no longer exists) The former Director of that agency is blamed by the current Director of Tourism for not  prepaying for the use of the websites. The former Director of Tourism Promotion is now the City Treasurer.
. A hotelier who asked that their name not be used said that less than 4000 pesos is needed to activate these three sites, and it seems incredible that the municipal government has not addressed this need, because the hotels need the get contacts they get from these sites.
The Director of Tourism, Gustavo Rodriguez, said these pages are being updated, and should be online for the public in April. Unnamed people accuse his staff of being 'ignorant' and say there is no need for the site to be disabled while it is being updated.

Seniors and Friends of Isla

This is the bus we will be using for the fundraiser we're calling the Island Bus Cruise and Booze event on March 26. Only 52 lucky people will be able to attend. We're getting some great prizes donated! Better yet, we are raising funds for the Red Cross and the Isla Mujeres Hospital! Have you purchased your ticket yet? Only $300 pesos per person for 5 restaurants and transportation plus some snacks and 5 free drinks. Oh and don't forget the prizes! .

This is a unique opportunity for English and Spanish students to come together and learn from each other with Christy Dix (English and Spanish teacher) as a conversation facilitator. We will meet for an hour for the very first time on Friday, March 28th at Seso Loco Restaurant.
This will be a friendly, fun and safe environment to practice speaking the language that the students have been learning. The students will pair up, one English student and one Spanish student and speak for the first 30 minutes in Spanish and the next 30 minutes in English. Christy Dix will facilitate the conversations and give participants a handout with vocabulary and questions to start conversations on the theme(s) for each meeting.

When: March 28th 2014 FRIDAY
Where: Seso Loco Restaurant
Time: 3-4pm
Cost: 50 pesos per person
Who: Residents and visitors are welcome to participate
Language Level: All levels are welcome, but need to be open to helping mostly beginners in Spanish and English.
Theme: Getting to know new friends, hobbies and/or activities in Isla, Why do we like/live in Isla Mujeres?
More information: Contact Christy Dix via email: Christy@ontargetlanguage.com (preferred method of communication) or cell: 998-136-149