Despite strong winds & light rains, tourists were enjoying the Caribbean 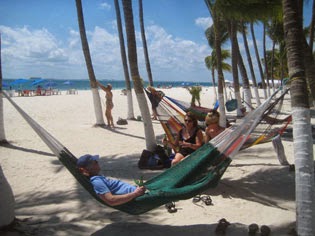 Lanrry PARRA
ISLA MUJERES, 13 de marzo.- l.
Leer más...
Many tourists enjoyed the beaches and a good number arrived early, with chairs or hammocks, or they rented loungers. This is generating prosperity for employers and service providers. International tourism is expected to continue and hundreds of domestic tourist are expected during the Easter holidays. In May and June is a waiting period, until the summer vacations begin. Then there are many domestic and foreign visitors, until the low season, and then this cycle starts again.

Lanrry PARRA
ISLA MUJERES, 13 de marzo.-
Leer más...
A campaign will begin on March 24 by the Department of Public Safety and Traffic to remove abandoned vehicles from the streets, including motorcycles, cars, boats, and trailers. Messages have been left on the vehicles, inviting the owners to remove them, but they have not responded in all cases, so it was decided that those vehicles will be moved to the Impound Yard by a tow truck. Owners are encouraged to take action before facing a sanction.
It was also mentioned by the Police Chief that there is an ongoing operation to verify that motorcyclists have license and registration and are wearing helmets. Islanders can visit the headquarters of Public Safety and Traffic to have a drivers license processed, to prevent these offenses.
Agapito responds promptly & effectively to citizen concerns
With Municipal Development Plan

Lanrry PARRA
ISLA MUJERES, 13 de marzo.-
Leer más...
At the Community Dialogue meeting Thursday morning at Punta Sur, the Mayor introduced the audience to the Municipal Development Plan for the upcoming years (MDP). Prior to the meeting, a video about the MDP was distributed. This is a document that will "set the course" for the upcoming year. The three characteristics are: Realistic, Feasible, and Measurable. There are five areas of government, 19 objectives, 58 strategies, and 202 actions.
The Mayor responded to a concern about possible contamination to Chacmuchuc Lagoon by requesting a special commission be formed to investigate, address the issue, and take appropriate measures.


Resumption of removal of abandoned vehicles from the public streets

Viernes 14 de Marzo de 2014 13:53 Jesús Molina DIARIO RESPUESTA
There have been some interruptions in internet service, and Cablemas representatives explained that several lines had fallen. Workers from Cablemas were seen in different parts of the island making repairs to the wires, but they did not comment, saying they were not authorized to give information. They were seen on prolongacion Aeropuerto working on lines. They said they were correcting a malfunction.
Sr Adrian Trejo of colonia Caribena complained to the reporter about service interruptions that came and went during the past week, noting this is very annoying because he is selling timeshares (Tiempos compartidos), and obtains many of his sales online.
Leer más...
Share 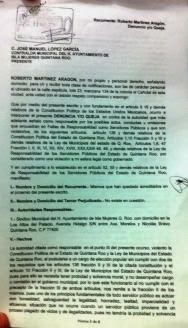 A complaint was filed concerning an official who is holding two positions, and against another official claiming he did not comply with the Accountability of Public Servants Act. The allegations were signed and stamped, and a copy was given to the media. Roberto Martínez Aragón filed the complaint and spoke with the reporter about his allegations and the regulations he says are being violated. 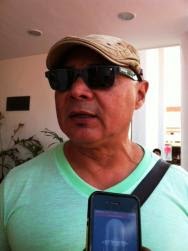 This is the leader of the Chamber of Commerce, who is frequently interviewed in Por Esto expressing annoyance about street vendors, and noting they represent unfair competition with business owners, who have more fees and overhead.
Business owners are complaining that the number of vendors is increasing and they are asking for intervention by authorities. At this time they are focusing on the vendors along the malecon of Rueda Medina. The Tourism Director did a tour of the area regarding this problem & will discuss it with other agency directors such as Fiscalización de la Tesorería Municipal.

In this renovation, the old "varillas" (I think that is rebar, put within concrete) were not replaced, although salt is concentrated outdoors and causes steel to deteriorate. An unnamed person said the work is likely to need attention in a year or so, and made comments about the errors of both PRI and PAN administrations.

Monday is St. Pat's Day! And an official holiday in Mexico commemorating the birth of Benito Juarez with a long weekend. Banks & Government offices will be closed.

Events for the week of International Women's Day...

This is a unique opportunity for English and Spanish students to come together and learn from each other with Christy Dix (English and Spanish teacher) as a conversation facilitator. We will meet for an hour for the very first time on Friday, March 28th at Seso Loco Restaurant.
This will be a friendly, fun and safe environment to practice speaking the language that the students have been learning. The students will pair up, one English student and one Spanish student and speak for the first 30 minutes in Spanish and the next 30 minutes in English. Christy Dix will facilitate the conversations and give participants a handout with vocabulary and questions to start conversations on the theme(s) for each meeting.

When: March 28th 2014
Where: Seso Loco Restaurant
Time: 3-4pm
Cost: 50 pesos per person
Who: Residents and visitors are welcome to participate
Language Level: All levels are welcome, but need to be open to helping mostly beginners in Spanish and English.
Theme: Getting to know new friends, hobbies and/or activities in Isla, Why do we like/live in Isla Mujeres?
More information: Contact Christy Dix via email: Christy@ontargetlanguage.com (preferred method of communication) or cell: 998-136-1497