Employee died after Carnaval: Apparently from a heart attack

Lanrry PARRA
ISLA MUJERES, 6 de marzo.-
Leer más...
After enjoying the festivities of Carnival, but apparently without receiving ashes (for Ash Wednesday),  José Albertico Méndez Rayón, 31, city employee, died early yesterday morning inside his home, in colonia Canotal, apparently as the result of a cardiac arrest, confirmed the Municipal Police.
The news of the death of this man known as "Yorchy" caused shock, because during Carnival he had been happy and participating actively. At Tuesdays 'Negrada' he was dressed as a baby, without imagining that hours later he would lay down to sleep and not wake up. He was married and had worked for the City for several years, in the department of Public Services.
It is noted that he had diabetes, hypertension, and heart problems, which ultimately caused his death. It is also mentioned that during the administration of Manuela Godoy Gonzalez, this young man was riding in a 'camioneta de redilas' , owned by the city, that flipped while moving a troupe participating in Carnaval at that time, but no one was injured.(Manuela Godoy was mayor before Alicia, who was before Hugo, who was our previous Mayor. They serve three year terms.)

Everything is ready at the municipal stadium

As part of their prepartaion before the start of the season of the Mexican Baseball League, the Tigres of Quintana Roo will play an exhibition game against the Isla Mujeres Pescadores on Saturday, starting at 1pm, at the stadium "El Pescador" (across from Chedraui). The Pescadores have already started preparing to face this team which won the national tournament, which will be a difficult match. The Tigres plan to hold exhibition games in other municipalities. The Mayor has asked the public to fill the stadium and show their support, and to have a celebration for these athletes.

Due to effects of strong winds of northern front: To prevent mishaps 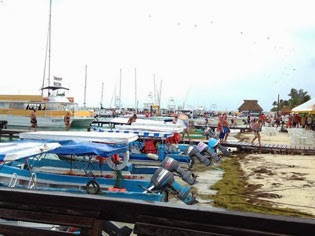 The port was closed at noon by the Harbormaster to boats under 40 feet in length, due to strong winds from the north at 30-40 km with gusts to 50km/hr. It is noted this restriction may continue for 48 hours due to the entrance of the Northern front, which causes a change of the wind direction, blowing from the south-southeast.Changing wind directions generally provokes intense rains, causing flooding in some areas of the island. Accumulations of rainwater were detected, apparently where the sewer grates are in poor condition, causing an accumulation of trash at the entrance to the drains. City workers complained about  problems at areas where residents have allowed tree branches and trash to accumulate, which then block the flow of water.
The boats under 40 feet were also restricted from moving across the bay and in the area of El Farito and the lagoons, and this also affected those of this size that depart from the hotel zone in Cancun.

Agapito signs agreement
English to be taught in all primary schools 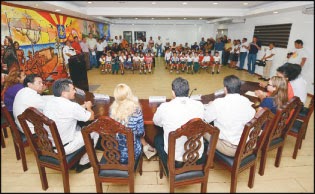 Lanrry PARRA
ISLA MUJERES, 6 de marzo.-
Leer más...
This agreement, signed by the Mayor, will implement the National Program of English in Basic Education, in municipal schools, with the help of Volunquest. The schools to benefit from this signing are  Andrés Quintana Roo, César Mendoza and Julio Sauri (both morning and afternoon shifts), where a total of 502 students will be learning  the English language. This is an invaluable tool for their future professional development. Isla Mujeres is a pioneer in the state, where school children will learn English simultaneously with the official curriculum. The document guarantees the teaching of English in the classrooms for two  years. It was announced that this pilot project will be brought to schools in the Continental Zone of Isla Mujeres.


Announcement of registration for race-walk for families & athletes

Tv Isla Mujeres | Lanzan la convocatoria para la carrera-caminata deportiva familiar...
www.tvislamujeres.com.mx
·
It is official that there will be English language classes in the primary schools in Isla Mujeres

A press conference was held at a popular local restaurant to promote this event in honor of Felipe Ceballos Erosa who died on March 21st. The event will be held March 23rd at 8am, beginning at Playa Norte, with circuits of five and 10 kilometers, to encourage participation by youths and adults. There are 300 participants expected and the registration fee includes a commemorative shirt, electronic chip and number,  abastecimiento (refreshments?),  and medals, among other things. The award ceremony will be held at 10:30. Islanders are given a discount and encouraged to participate. 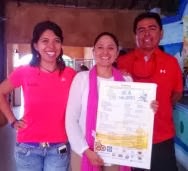 ISLA MUJERES ARTIST FAIR (OUR ONE YEAR ANNIVERSARY IN THE SQUARE): MARCH 7TH!
.
Posted by went coastal at 2:10 PM