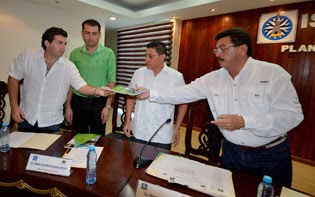 The Plan  (PDM)has 5 basic objectives, and it aims to ensure essential services, improve living conditions, boost the economy and jobs, increase order, care for the environment, and to have good government. It was approved unanimously by the City Council and will be sent to the State Legislature for approval and publication.

Lanrry PARRA
ISLA MUJERES, 26 de febrero.-
Leer más...
The courses will be offered to both the employed and unemployed, and are a result of an agreement between the City and CECATI. They will take place at the Community Center in La Gloria. The first courses were inaugurated with a press conference event.

Swearing in of PRI advisors

Another Dialogue with the Citizens took place last night at the municipal plaza, where the Mayor listened to citizen complaints and gave instructions to address their concerns. The Directors of various agencies were given specific instructions to address these requests. This includes the placing of two speed bumps, pruning trees that are affecting electric lines, and forming a steering Committee between the Youth Institute and members of the community.
.
Leer más...
Share
Open arms for Europeans visiting the island

Several groups of Italian tourists arrived on the island yesterday, and on the streets you will see tourists who are Swiss, Israeli, and from North America. Souvenir store employees are reporting sales of more than 60 percent, noting they like these tourists who do not haggle so much and who are buying, not just looking.

This was a good lobster season for the five fishing cooperatives, compared to last year, according to preliminary data..  They have taken in more than 15 million pesos from the harvest of 23 tonnes of lobster tail and 46 tonnes of live lobster. The fishermen of Patria & Progreso report a worse season than the others, and they use traps while the other mostly rely on nets.  While it was a better season than last year, it is not like the time prior to Hurricane Gilberto, said one fisherman, who said production has declined sharply since then (1988).
La Justicia Social reports one tonne and 100 kilos of tails and 19 tonnes of live lobster, ; Patria y Progreso, 700 kilos of tail and  5 tonnes of live lobster; Isla Blanca, 11  tonnes of tail and 10 of live, Caribe had 3.5 tonnes of tail and 12 tonnes of live, and Makax had 6 tonnes and 513 kilos of tail since January and no live lobster.
The tails are selling for 350 pesos a kilo and live lobster for 160 pesos per kilo. The last day of the season is tomorrow, February 28th. The 300  fishermen are hoping for municipal support during the four months of closed season, (March-June), which was offered by the previous PAN government, of about 2.8 million pesos, to give them about 80 pesos daily. 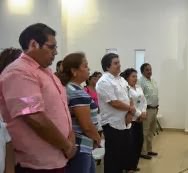 (There are usually parades in the afternoon, down Rueda Medina to the whale shark festival, and events at night on the Town Square. The troupes also perform at parties, hotels, restaurants, & in the streets.)

On Sunday, March 2, Parade scheduled to begin at 3pm on Rueda Medina and  they will hold the traditional Carnaval Playero at the Posada del Mar Beach, with the children's costume contest on the beach at 4pm.

The third day (Monday) of Carnaval includes a second parade through the main streets of Isla Mujeres. At the town square in the evening will the the Regional night, with a costume contest in the open category, and a competition between the dance troupes in the Regional category.

Monday March 3 will be the second parade through the main streets of Isla Mujeres. There will be the traditional regional evening on the town square with Yucatecan outfits, and the dance of the pig's head & the bull petate  (el baile de la cabeza de cochino y el toro petate), among other activities There will be a costume contest in the Open category and a competition between the dance troupes in the Regional category.
In addition, with the regional night on Monday, there will be a celebration of the discovery of Isla Mujeres, which occurred on the 3rd of March.

Tuesday March 4th  is the last day of Carnaval is the most anticipated "Mardi Gras", which begins at mid day with the Negrada, when the troupes will pass through the streets downtown, in the presence of the traditional "Toro petate". That night the festival will continue on the town square with the contest between the troupes, followed by the reading of the will of "Juan Carnaval" and the burning of his effigy.