Responding to the fishermen 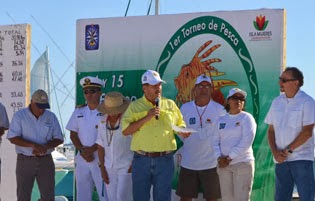 With the participation of 48 boats, there was a total capture of 430 kilos of lion fish, which is considered an excellent result for this first tournament. After two days of fishing, the vessel "Lluvia" was the winner with a catch of 76.36 kilos, which won them 5000 pesos in cash.The largest fish was captured by the boat Maria Guadalupe and the heaviest was caught by "Isabel III"
At the event, the Mayor symbolically delivered a boat motor and a boat, to represent the four boat motors and four boats for the fishermen who are benefiting from the Programa de Apoyo a la Inversión en Equipamiento e Infraestructura, which combines federal and state resources. The municipal government plans to help the fishermen access programs such as those of PROPESCA which may offer temporary employment when they have economic difficulties during closed seasons. 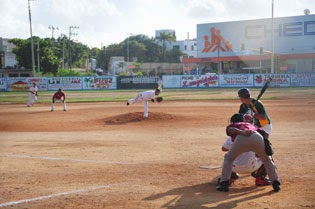 The remodeling of the baseball field "El Pescador" is expected to begin in upcoming weeks, and the design is in the final stage of preparation. They plan to raise the field in general, to prevent flooding, and to install an irrigation system.Approximately 20 million pesos will be invested.
There is a renovation planned for the Blue Dome at Plaza Habitat in colonia El Canotal, which will include grandstands, locker rooms, bathrooms, and playing surface. This facility would then be exclusively dedicated to sports activities, and not to social events, which can occur at the Convention Center. The Convention Center, which is the current home of the basketball team Cahuameros of Isla Mujeres, would become exclusively used for social events.
Excellent romantic event with the spectacular singer Cristal

Hosted by Agapito & Marthy to benefit the DIF 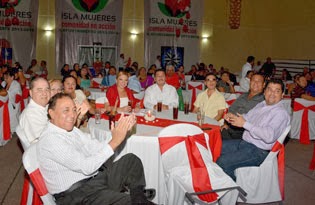 
Presenting project of a new terminal in Punta Sam

The Governor and other state and federal officials toured the projects and reviewed the work of expansion of the docks and facilities in Punta Sam and Isla Mujeres, which aim to provide better service to the public and tourists and to integrate the Contintental Zone of the municipality into the "new Isla Mujeres". These works will help maintain the state as a tourism leader in Mexico and Latin America.
The exhibition of projects and works included the new wooden pier for the port of Punta Sam, which will benefit 80 members of the tourism operators cooperatives, as well as 30,000 passengers annually. To compliment this, will be modernization of the maritime terminal building in Punta Sam, with an investment of over a million pesos. This facility will be similar to the one being built in Isla Mujeres, to integrate the new tourism center of the municipality in the Continental Zone.
Previously, the governor and federal officials held a meeting in Puerto Juarez, where the Governor stressed the importance of the execution of these works, noting the Urban Development Plan includes a new center of tourist population in the Continental Zone of Isla Mujeres, where there are plans to build 20,000 hotel rooms.

Por Carlos Gasca > Quequi .-
0 comentarios Leer toda la noticia
Or they are expecting improved weather conditions..the verb means both. Fishermen are reminded to get their lobster traps in before February 28th, which is the last day of the season before the ban begins on March 1st, to avoid sanctions.

Por Carlos Gasca > Quequi .- .
0 comentarios Leer toda la noticia
The damage to the mangrove is obvious along the Caribbean malecon, of the coastal road, and it is thought to have happened overnight. It is not know why it was cleared nor by whom, because there are no properties nearby. The plants help prevent the erosion of the coastal cliffs, and mangroves are protected plants.

Leer más...
Share
The Tortugranja is a popular attraction in Isla

Leer más...
Share
The Turtle Farm facility is popular with tourists, and has a program of conservation for the reproduction of sea turtles. As the nesting season approaches, staff will be allocated to monitor the coasts, and to move the eggs to the turtle farm for incubation, then the hatchlings are held in tanks to grow stronger, before they are released on the beaches of the island.
The cost to enter the aquarium of the facility is $3 dollars per person and it is open from 9am to 5pm. The reporter notes the tourists would benefit from guides to give tours and explain the conservation work and the exhibits.

Unnamed complainants said there are more rental golf carts circulating daily, some without plates, and others with only one plate. The plates come in pairs, so it is suspected that the same plates are being used on two different carts. The complainants want SINTRA to take a census of all the units on the island, and verify that the number of units corresponds to the number allowed by each concession. They also want the police to not take excuses and to impound all golf carts without plates or that just have one plate instead of a pair. It is pointed out that every day there are more golf carts being driven around the island without plates. The complainant said that excessive number of golf carts not only hurts the taxistas, it harms those rental agencies who work with the exact number of units they are authorized to have under their concession.

Feb 20-21 there is a "CircusFest" event at the Convention Center, with more info HERE