For Sept 14-20, all of the state will be in Yellow on the epidemiological light. 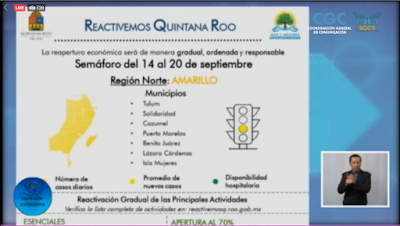 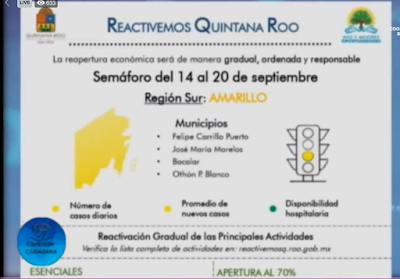 Today the municipality of Isla Mujeres reports two more cases for a total 170 positives, with 12 deaths and 117 recovered. 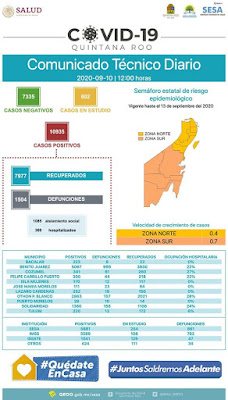 The state geoportal still has the data for 9/8, which was published in yesterday's edition,  reporting active cases by colonia.
On the national map, the municipality reports 13 suspicious and 73 negatives (and 168 confirmed with 12 deaths) 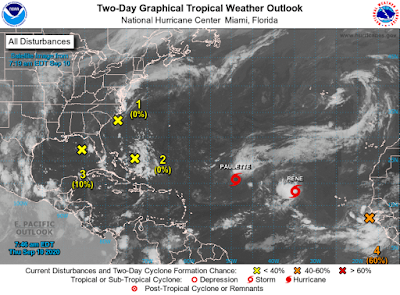 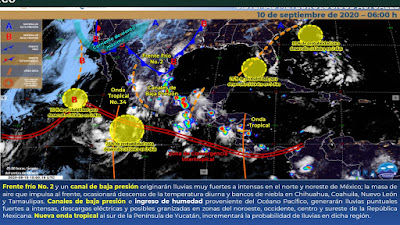 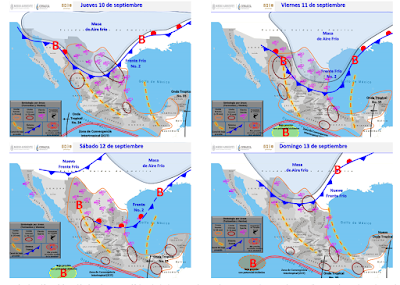 This graphic is the 2p (EDT) update 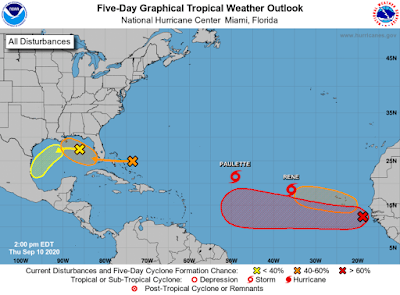 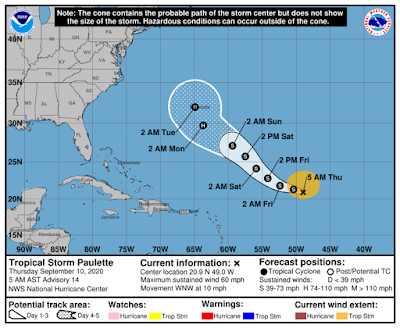 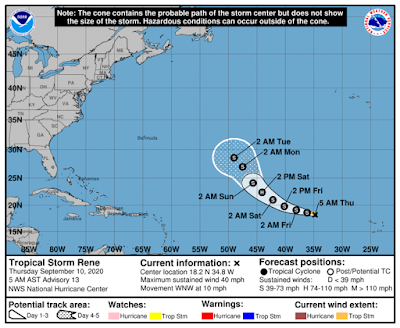 Caption: To fortify security in Isla Mujeres, security cameras were installed at different strategic points on the island to provide continual surveillance.

VIDEO    Mayor/2nd Informe---Caption: In the midst of difficult times is when we must always act while considering of the well-being of others. At Isla Mujeres we make decisions, we carry out strategy actions, but above all, we prioritize the health of families.

VIDEO  of downtown whose caption says that even with the epidemiological light in Yellow, doors remain closed at many Isla Mujeres stores.

(Photos of caution tape blocking a beach with signs saying "Private Property") with a caption saying the Director of ZOFEMAT (Federal Zone Agency) in Isla Mujeres, Kerem Pinto Aguilar, complained to PROFEPA regarding the attempted privatization of the Federal Zone at the Villas Ha-Na-Ha in Sac Bajo.

upscale neighborhood of  Bachilleres, convenient to downtown or the colonias, yet separate.  Quiet & Private.

m the rooftop terrace. Large sliding doors open to a patio & the white sand backyard-beach, overlooking the Caribbean sea.  Downtown is  ~ a mile away; we're on all four bus routes or  flag a $3 taxi. Off street parking. In the quiet neighborhood of Bachilleres,  sleep to the sounds of the sea..  $275/$325/$425 wk   $40/50/$65nt  Monthly Discounts

he village, as well as a variety of other stores. 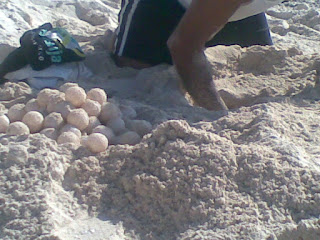 Turtles continue nesting in September. They nest along the eastern beaches. Tortugranja staff and volunteers gather the eggs and incubate them in the sand in a pen outside the facility. Three species nest annually in Isla Mujeres, Greens, Loggerheads, and Hawksbills.

Swimming with the whale sharks ends in mid-September. They congregate and feed on a 'buffet' of plankton and fish eggs from a type of tuna. Rays are also attracted to the feeding areas.  Photo by Tony Garcia 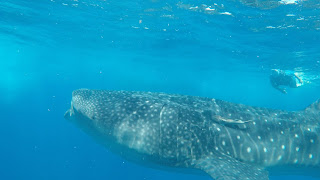 Wednesday, Sept. 16--Independence Day  (The Grito is read by the Mayor each year on the night of the 15th, which will presumably be done virtually this year.)

We have returned to Maravilla Caribe and we consider it to be a gem. Is it a luxurious resort? No. On the other hand, it's the kind of place where you feel comfortable sitting outside with a beer and watching the ocean, reading all afternoon in a hammock or going for a long walk along the shore. To sit on the patio with a plate of fresh fruit and a cup of coffee is my idea of the perfect morning. It's like having your own little private beach cottage - it's not fancy but that's not what we're looking for. A 15 minute walk takes you into the busy little town, full of great little restaurants and shops, and a $3 taxi ride will get you just about anywhere on the island. The landlord is friendly, accommodating and genuinely cares about and knows the local community. For anyone who wants a lavish package vacation, this obviously isn't the place for you - there are plenty of resorts that will fit your needs. Maravilla is a simple, lovely place to get away from it all.

I want to say thank you again for a fabulous vacation! Your studio was perfect! Having the extra space, kitchenette and dinning table made the space perfect for a long stay. Your little details like coffee filters and ice cube trays made it feel like home. I also really appreciated that you were there if I needed anything, but that you also let me have my space.

Being out of downtown, yet close to everything made the location perfect. Add the beautiful beach and it couldn't have been any better!

Thank you so much! When I return to Isla I will be back on your doorstep. Happy Holidays!

Judy from Ohio wrote...
I stayed at Maravilla and absolutely loved it. Beach and patio was kept very clean and since handicapped I would spend the days on patio with my laptop at table right outside my room. Each room had table/chairs in front of room. Not many places on isla you have the beach right outside your door-saves alot of money instead of renting beach chairs and buying drinks downtown. I also do not like crowded beaches and stacks of chairs next to each other as on the north beaches. You hear absolutely no street noise just the waves hitting the shore. There were bikes free to use, beachchairs free to take to downtown, and free washer/dryer to use. The price is excellent value and the owners live there so they do not need to list with an agency giving renters better $ value. Isla is not for everyone. But condo/luxury hotels now line the once beautiful North Beach for those wanting the Cancun version of places to stay, so sad, plus $$$$. I prefer peace,quiet, and great value. Not many places with sunrise/sunset views.

For some of us, there comes a time when we prefer peace and quiet to hustle and bustle. For a few regrettable years, I got off buses and lined up with the rest of the schmucks to check in for the all inclusive 'experience'. I set the alarm daily to head down with everyone else to make dinner reservations for the pleasure of eating soggy Sushi served by brusque Bahamians. I wore the wristband of shame, identifying me as an easy mark on any excursion. I tipped and cajoled the bartender for extra shots of rum. I listened to the drunken monologues of people who get to cut loose just once a year. With the all inclusive experience, your fate is not entirely your own...

And then I tried something else, the self catering experience - more a case of here's your key, here's your apartment, have fun! Settle in, stock your fridge, stock your bar and you're off to the races. Happy hour is whenever you choose. No lining up at a buffet. Snorkel on your own time. Open a bottle of wine and cook a leisurely dinner - no one's rushing you out for the next seating. Sleep in and eat breakfast when you want, don't worry about the dining room being closed.

That's the experience I prefer these days. And Mara Villa doesn't disappoint. You get exactly what you pay for: a clean and comfortable room with everything you need. The experience is great for people who like to 'do their own thing.' In essence, staying at Mara Villa is like having your own private beachfront villa.

Amenities include good wifi, towels, sheets, dishes, pots and pans, a fridge and freezer, drinking water, hammock hooks, and a clothesline. Bonuses include a patio with tables and chairs, a charcoal BBQ, a beach for watching the sun rise over the water, and a rooftop for watching the sun set over Cancun (also good for star gazing and extreme suntanning).

The local bus passes by the front door and costs 4 pesos to head downtown. A taxi is about $2 into town. Chedraui, the big grocery store, is less than 10 minutes away by foot. Grab a cheap cab home if you've really stocked up.

Ronda is a great host - a storehouse of island information about where to eat and what to do. Bruce, her husband, is an avid snorkeler and can point you in the best direction off their private beach for underwater wildlife. I was lucky enough to see dolphins swimming offshore one day. Close to shore I also saw a barracuda, a sting ray and a pair of graceful Caribbean squid. The usual tropical fish abound as well.

It's worth noting that Mara Villa is located on the east side of the island, windward. The shore is more dramatic and rocky, but there are very few, if any, mosquitos. The west side of the island is calmer and more traditionally 'beachy', but mosquitoes abound at dawn and dusk. With the rocky shore, you need water shoes for entering the water and swimming, but you have the beach all to yourself at Mara Villa. Head to the sublimely Caribbean style North Beach if you miss the crowds.

I spent almost a month at Mara Villa and it was the calm, casual and relaxing experience I craved. I will be back to Mara Villa, but I won't ever go back to an all inclusive. 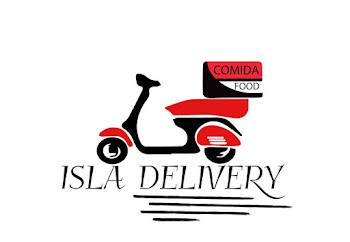 Click here for link to menus from most of your favorite restaurants & more information.

My friend and I just stayed at Maravilla Caribe, December 20-25, 2012 and we had an absolutely wonderful experience. The owner, Ronda made me feel comfortable before I arrived, providing helpful information about travel to the area. She made an extra effort to secure a larger room for us, which was perfect. Maravilla is quaint, charming, clean & comfortable. We loved the bright green color of the house! The kitchenette was simple, clean and well equipped with everything we needed to prepare meals. The beds are very comfortable and Ronda provides lots of clean towels. She even offered to let us use the washer/dryer and bicycles for free! The best part (other than the low cost) is you have your own private beach in the back! It is a beautiful place that I highly recommend.

Hello I stayed at MaraVilla, la Casa Verde :-), Dec 10 to 20 this 2012 for my first time and would not hesitate to return. This is my 11th year staying on the island and I have stayed at many places. The location is amazing, and the owners have modified the patio doors so that those of us who want to hear the waves all night can do so with security. They were super helpful at every turn and what meant the most to me is that they really care about their guests and are friendly. We enjoyed a wonderful lunch together. The room was spacious and clean. At MaraVilla there are only 3 rooms facing the water so it is peaceful, quiet and private. At MaraVilla, there were workers out painting the house in front and raking the beach and it was well maintained. There were no rocks on the clean tile patio. you do need water shoes to wade in to the water but it is worth it. And if you want to go to a more perfect beach i.e. no reef etc then one could go and pay 150-200+ per night at Playa Norte (but you won't hear the waves from your bed or have the privacy or owners that care about you!!). The bed was comfortable, mattress good, sheets in good shape and clean (more than i can say about the place i had the misfortune of staying in Progresso!!). Honestly you get what you pay for in this world and if you were to go to Tulum, or San Filipe or Progresso you are sure getting much more bang for your buck at MaraVilla in the 50-65 dollar range!!! If you are a 5 star resort person I would say stay at a 5 star resort, but if you enjoy the waves, quiet, privacy and caring owners then stay at this MaraVilla the Casa Verde :-)

Noska from Austin wrote....
Maravilla is one of the coolest little spots on the isla.The hosts are awesome,location perfect,rooms are clean and affordable