Homes, schools, parks and work centers are monitored at all times in Isla Mujeres, both on the island and in the Continental Zone. VIDEO   LINK: https://goo.gl/z6Cpgs
Isla Mujeres remains one of the safest municipalities in the state
Since the beginning of his administration, the municipal president of Isla Mujeres, Juan Carrillo Soberanis, has worked at strengthening security throughout the municipality, both on the island as well as in the Continental Zone, maintaining it as one of the safest destinations in Quintana Roo and guaranteeing the well-being of island families.
Thanks to the support of the state government and Gov. Carlos Joaquín González, the mayor has delivered 13 new fully equipped patrols to the Department of Public Safety and Municipal Traffic. Prior to October 2016, the police department, whose director is Jaime Ongay Ortíz, had six patrol vehicles and eight motorcycles, which the Mayor has increased considerably, including the addition of two electric bicycles.
In addition, the number of active officers in the Police and Traffic Department has increased from 72 to 200, previously trained officers, and the communication equipment has been updated, with 15 Matra radios and 10 portable radios, as well as acquiring protective vests and other supplies.
The Mayor said, "We are the safest municipality in Quintana Roo and we have maintained crime rates below the national average, but we are not satisfied. That is why we have reinforced the surveillance in all areas of Isla Mujeres with tours 24 hours a day, multiplying the surveillance of streets, houses, parks, schools and workplaces."
He said the support of the state and federal governments has been important, to have a better prepared and better equipped municipal police force, with coordinated work between the security agencies of the three levels of government.
With these actions of surveillance, the municipal government, led by Mayor Juan Carrillo Soberanis reaffirms its commitment to continually monitoring the welfare of all the families of Isla Mujeres and those who visit this tourist destination.


20% ncrease in taxi fares announced LINK    VIDEO
Taxi union leader Eduardo Peniche Rodríguez, said that as of December 1st,  taxi fares are scheduled to increase by 20 percent, for both locals and tourists. He said it has been more than a year since the increase in gas prices, making this increase essential and evident for the operators. He said, Now that gas is nearly 17 pesos/liter, we charge 30 pesos for the minimum fare and local residents of Isla Mujeres receive a 50 percent discount."
He said a documents will be released in upcoming days about how the rates will be established, emphasizing that this change is fair for the operators and partners.  He explained that while it was good for the people that the same rates were kept when the price of gas rose, this change is fair for the operators and partners who are paying the increased gas prices, as well as other rising costs for other items.

We work with IAPQRoo to provide better service to the community: Jorge Martin  LINK
The delegate of the Secretariat of Infrastructure and Transport (SINTRA) in Isla Mujeres, Jorge Martín Álvarez, explained the importance of working together for the modernization of the State to provide better services and attention to the people of Quintana Roo. He attended the presentation of the book "Conversaciones con Carranza" by Dr. Alejandro Carrillo Castro, a well-known Mexican official, diplomat and researcher. This was part of the event "Public Administration Campaigns" which was held for the  39th anniversary of the Institute of Public Administration of the State of Quintana Roo "(IAPQROO).
Mr. Martin Alvarez said that these types of events provide feedback on the work of public servants and the development of projects and programs according to the needs of society, to have a better government. He said, "We work hand in hand with IAPQROO, as the innovation and professionalization of public officials is a necessity to respond promptly to the constant demand of citizens."
He said that Dr. Alejandro Carrillo's presentation of his book "Conversaciones con Carranza" also nurtures the public officials' perspective on public service and the need to professionalize and renew themselves, as well as reinforcing their commitment to Governor Carlos Joaquín to achieve real change in Quintana Roo.

The second half of this article notes that on Monday the union leader announced that there will be a 20% increase in taxi rates, causing the fare from downtown to the colonias to increase from 30 to 36 pesos. The local users receive a 50% discount, so their fee will increase from 15 pesos to 18 and student rates will  rise from 7 to 9 pesos on December 1st, according to an interview with another online media source.


Isla Mujeres news briefs
Breves de Isla Mujeres [+] Ver mas
Miguel Figueroa Perez said that following a public protest last week at the facitilies of the cable television company, 150 customers have decided to sue jointly for breach of contract, with the IFT, Federal Institute of Telecommunication, concerning slow internet speeds. They say the company is charging them for 10MB while in reality speeds barely reach 2 MB or less, making it impossible for children who use this digital tool to access educational sources.

New Ferries
There is no definite date for the start of operations of the new ferries by two ship companies, which will provide alternative options for the route between Isla Mujeres and Puerto Juarez. Marinsa and Naveganto have said they are fine-tuning details to start operations. The Port Authority,  APIQRoo, recently reported that these two companies plan to have two boats each, providing service every half hour, at more reasonable rates than Ultramar.


Fri. Nov. 3 at 5p: Casa Cultura conference about indigenous celebrations in Mexico for Dia de los Muertos (in Spanish).
Sat. Nov. 4 at 6:30p a procession featuring traditional clothing from different regions of Mexico starting at the Town Square church and going thru the downtown streets. AND...

7:30p Noches Magicas performances on the Town Square featuring two troupes including the Folklorico Troupe of Quintana Roo and the closure of the Dance conference event.


Wednesday, Nov. 8, at the Casa de la Cultura there will be an homage to Emiliano Martinez Perez who was a founder of the musical group Trova Islena. Free.

Nov. 18-19 Exhibition: Come & see the art inspired by the founding families of isla and hear about their stories being told through the art. 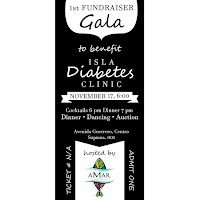 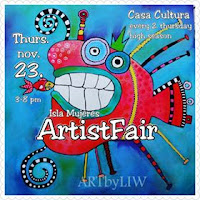 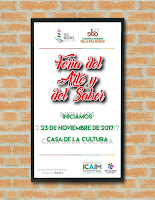 Nov. 28-Dec. 8 Annual Festivities honoring the Patron Saint: Our Lady of Immaculate Conception
Which are expected to include a small carnival with rides and games, a bullring, nightly performances on the Town Square, and a boat procession and wreath placement over the Cruz de la Bahia, as well as private celebrations by the ~20 groups involved in the festivities.  The horse procession is scheduled for Dec. 2, departing from the Convention Center at 1p going to the colonias & the Sacred Heart Church, and finishing at the ring at the north end of the runway.

Dec. 12 Dia de Guadalupe, the Patron Saint of Mexico. The night before there will be a gathering at the coastal chapel dedicated to her in Salina Chica, with Mariachis, to sing Las Mananitas and honor her. There is usually a run in the morning.

Sources for Weather Information:
LINK to Civil Protection Q Roo weather bulletin  (Spanish)
LINK to Mexico National Weather Service (Spanish)
LINK to satellite images for the Mexico National Weather Service (Yucatan peninsula is under Satellite GOES Este, I recommend "Animacion" (it used to be in my blog margin, until Blogger became incompatible with it).
LINK to a private weather station on Isla Mujeres
Posted by went coastal at 11:50 AM