Asking state Congress to change Q Roo's time zone LINK
Members of the XV state Legislature have agreed to a plan to propose that the Chamber of Deputies  carry out the necessary reforms to reverse the time zone decree that was applied in the state of Quintana Roo on January 31, 2015,  in order to return to using the time zone that applies to the center of Mexico.
Some of the legislators think that the time zone change has not brought benefits to the state. They have requested that the Legislative Research Institute of the State Congress carry out a study, analysis and evaluation of the impact of the decree from January, 2015, which changed the time zone in Quintana Roo.
Time zone map from Verne who got it from the CIA fact book. When it was decreed that Quintana Roo would use the Eastern Time Zone, it was also decided that the state wouldn't participate in Daylight Savings Time. 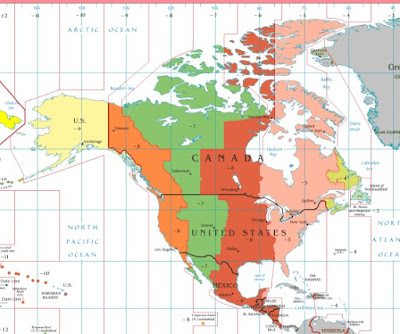 The company Marítima Isla Mujeres (who operate the vehicle-cargo ferry to Punta Sam) announced that maintenance to their ferries will continue for at least one more week, however, service has not been interrupted. LINK
Felipe Rodríguez García, Operational Manager of the company said that the maintenance work is done in anticipation of the upcoming season at the end of the year. This is why the ferry "Sergio Gracia Aguilar" was first serviced and now it is the turn of the ferry"Isla Blanca". He said that the company is committed to providing quality services and as part of the improvements, there is preventive maintenance, which is carried out on each of the boats.
He said that since they began doing maintenance on the ferry Sergio Gracia Aguilar, the number of crossings has been extended. The first departure from Isla Mujeres to Punta Sam is at 5am on Monday thru Friday. There has been no change of schedule on the weekends. He said that the schedules could be normalized by the end of this month, depending on the demand. The schedule currently handled from Monday to Friday is as follows:

Vaccination program against influenza begins in Isla Mujeres LINK
- The Ministry of Health, seeks to prevent complications with respiratory diseases, which is why the Vaccination Program Against Influenza campaign began yesterday, with the intention of administering  a total of 1300 free vaccines in the municipality of Isla Mujeres.      This National Public Health System campaign aims to prevent the influenza virus (flu) in the population, and is aimed primarily at vulnerable groups, such as children under six, seniors and pregnant women.  Similarly, it is aimed at people with diabetes, obesity, hypertension or cardiovascular disease. The vaccines that can be applied to anyone who is 6 months of age or older.         The first vaccination module was opened at the APIQROO terminal facilities from 9 am to 1 pm until Thursday, November 9, when it will be installed in the Colonia La Gloria park.
This free campaign is part of the actions for the prevention of respiratory diseases in the season of cold weather, in addition to recommending measures such as hand washing, use of antibacterial gel, disinfection of common objects, protecting yourself from changes in temperature and consuming vitamin C.


The girls basketball team "Trigueñas" represented Isla Mujeres in the Bacalar International Cup, and returned home after a great performance on the field winning second place in this youth competition. LINK
They are continuing to train and will represent the municipality in the Sixth Yucatan Basketball Cup, Sexta Copa Yucatán,  to be held from December 15 to 17.

Encouraging fishermen to request boats and motors
Exhortan a pescadores solicitar motores y lanchas [+] Ver masFull article at this link
The president of the Federation of Cooperatives of Quintana Roo, Baltazar Gómez Catzín, encouraged the boards of directors of several cooperatives of the state, including two from Isla Mujeres, to submit their requests for support for the replacement of engines and boats for those who haven't already received this assistance. The state and federal governments make economic contributions  for the replacement of boats and motors to ensure that the fishing fleet isn't old and unsafe. Assistance could be provided for about 70 engines in the state. In Isla Mujeres, the two cooperatives Caribe, and Patria & Progreso need to replace about 10 engines and also some boats.
The men of sea use the motors and boats to catch lobster and fish throughout the year, however, due to the distance to the fishing areas and bad weather, they deteriorate quickly, and in two or three years  they need replacement, depending on usage and maintenance.
The official also asked the directors of the cooperatives that are involved in the patronage project that finances the operation of the Isla Mujeres hyperbaric chamber to pay the agreed upon contribution on time, to cover the salaries of the personnel who operate it, since that capsule has been very active. So far in the lobster catching season, more than 30 patients have been treated. He said, "We not only have to pay the workers' salaries but also we must purchase oxygen and other items to carry out the work of providing this medical attention."


Working on the 2018 income-budget
El proyecto de Ley de Ingreso 2018 está en proceso de elaboración .. [+] Ver masFull article at this link
The treasurer of Isla Mujeres, Adriana Martínez Galué said they are working on the income bill for 2018 and it should be ready in a week. She said that a considerable increase is expected to the current income law amounting to 280.8 million pesos collected.
There are nine sections in  the project under consideration for its application in the Exit Budget; for Personal Services the budget was 103.9 million pesos; for Materials and Supplies, 37.5 million; Personal Services, 75.2; Transfers, allowances, subsidies and other aid, 30.4; Movable property, real estate and intangibles, 7.8; Public investment, 17.4; Financial investments and other provisions, 180 thousand; Participations and contributions1.8 million; and Public debt, 6.5 million for a overall total of 280,864,791.84 pesos.
According to some people involved in these issues, several federal investment programs such as Tu Casa, Habitat, Rescues of Public Spaces and the Metropolitan Fund could be reactivated to receive heavy investments, like they were in 2009, 2010, 2011 and 2012. These concepts have been "forgotten" in recent years, due to lack of timely management.
It has been published that in November 2016 the City Council approved 266.3 million, but Congress could increase this by more than 14 million pesos. The collection of fees for garbage collection in 2017 was budgeted to raise 8,199,659.84 pesos from the business sector. It is not under consideration again to charge fees to the general public.

Young islanders attend the second pastoral mission in Ecatepec
Jóvenes isleños asistirán a su segunda misión pastoral en Ecatepec. [+] Ver masFull article at this link
A group of 15 young people from Isla Mujeres will leave Thursday afternoon to attend their second pastoral mission in Ecatepec, in the State of Mexico, for more than a week. Each day at 8am they go on home visits to encourage people to attend the meetings which are held in different locations. In the afternoons there is a rosary at 5pm, a Mass at 6pm for an hour, and then confessions.
The group Isla Mujeres Young Charisma will also perform their music. Last year ten people attended, of whom three are returning.


Isla Mujeres news briefs
BREVES DE ISLA MUJERES.. [+] Ver masFull article at this link
There was a normal amount of tourism on Wednesday, and a good season is expected in the winter, based on reservations.
Due to a lack of demand, CENDI nursery school will suspend the plan to extend their hours, which was planned to be from 7:30am to 8pm. There was not enough demand from women who work in the evenings.

Wednesday, Nov. 8, at the Casa de la Cultura there will be an homage to Emiliano Martinez Perez who was a founder of the musical group Trova Islena. Free.

Mural Festival at the Cañotal Mercado
Nov. 13-14 Artists arrive, clean up & set up, volunteers welcome.
Nov. 15-17 Public welcome to visit & interact while the artists paint.
Nov. 18-19 Exhibition: Come & see the art inspired by the founding families of isla and hear about their stories being told through the art.
Nov. 20 Casa de la Cultura Exhibition & Sale of artists' paintings to raise money for a new roof at "Julio Sauri" primary public school. 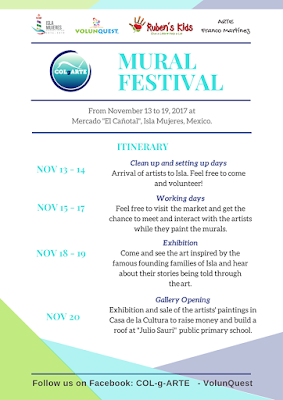 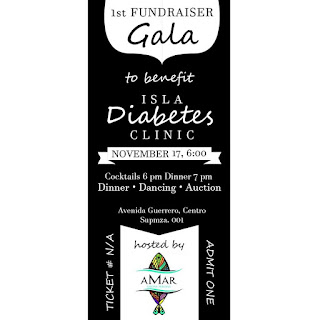 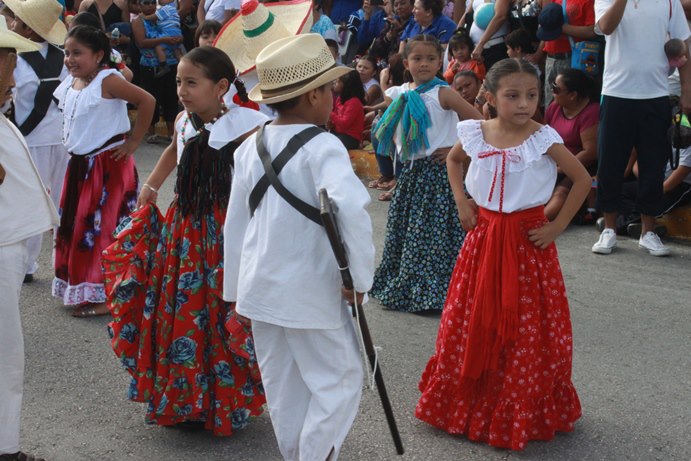 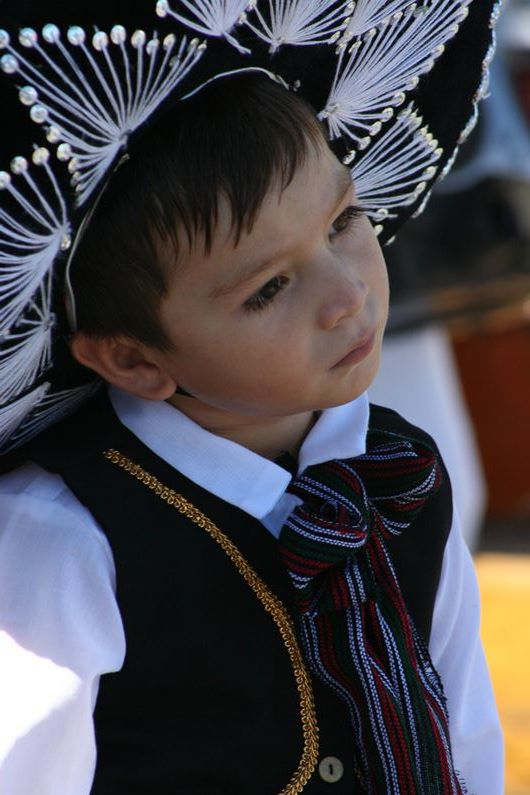 Sources Weather Information:
LINK to Civil Protection Q Roo weather bulletin  (Spanish)
LINK to Mexico National Weather Service (Spanish)
LINK to satellite images for the Mexico National Weather Service (Yucatan peninsula is under Satellite GOES Este, I recommend "Animacion" (it used to be in my blog margin, until Blogger became incompatible with it).
Posted by went coastal at 8:41 AM