Working together for a positive image of this Pueblo Magico

Lanrry PARRA
ISLA MUJERES, 22 de diciembre.-
Leer más...
The President of the Federation of Fishing Cooperatives of Quintana Roo (FCPEQRoo), Baltazar Gomez Catzin, said the bad news is that fishermen will be left out who have not submitted all the required documentation for the federal program which provides financial assistance for buying equipment such as boats and motors. Those who met the documentation requirements will need to cover 30 percent of the costs of the equipment . He said the good news is that the price of the motors will not fluctuate with the exchange rate with the dollar, but will be set at the rate of 16 pesos to a dollar.
He said about 30 percent of the fishermen around the state either did not complete the paperwork or did not have their portion of the payment, which could cause reduced benefits to be available the following year. This program offers assistance from the state and federal governments for the replacement of outboard motors, boats,  and navigational equipment, among other items, with the two branches of government covering 70 percent of the costs, at a cost of seven million pesos, he said.

When the night ends, we await the sight of another magical sunrise.
Cae la noche y ya esperamos ver el mágico amanecer.

On Tuesday, the 7th edition of the Propane Tank Exchange was held,  trading tanks in poor condition for ones in optimal condition.

These campaigns are done thanks to the efforts of Mayor Agapito Magana Sanchez through the Department of Civil Protection and the company Z-Gas, in order to reduce the risk of leaks in the homes of island families and therefore to have a safer island. The Director of Civil Protection, Mauro Rodriguez Velazquez, said that in 2015 there have been some non-alarming leaks reported, with no life threatening incidents. He said, "These preventative campaigns are done to ensure public safety, and to avoid exposing the lives of islanders to risks."
This event was held at the Bicentennial Dome in La Gloia, and approximately 220 tanks were exchanged for free. The old ones will be taken by the company for inspection to determine if they have any remaining life or need to be permanently retired. These campaigns will continue, in an effort to remove the deteriorated cylinders from the island and to support the economy of the residents and protect their lives.


Presenting uniforms & credentials to the Comisionistas

Isla Mujeres – UNIFORMAN A COMISIONISTAS DE ISLA MUJERES
Tuesday morning the Mayor, Agapito Magana Sanchez, presented uniforms and credentials to the comisionista hawkers of the island. It has been a few months since Isla Mujeres earned the distinction of being a Pueblo Magico, and the Mayor and the Council have been working toward promoting this new image of the island.  The new shirts have the logo of Isla Mujeres Pueblo Magico, and the credentials identify them as tourism workers who earn commissions.

The Mayor said that achieving the Pueblo Magico distinction was the result of a combined effort by everyone, and it is proof that when the community and the government work together, the results are always positive. Regarding the thousands of tourists who arrive to the island, he encouraged the comisionistas to guide them and to care for them, and above all, to give them the best service and treatment available.
He said Isla Mujeres has large numbers of tourists arriving year after year, and in 2015 the total is expected to be about 2.2 million visitors. He offered his best wishes for a Merry Christmas and a prosperous New Year in 2016 to all the participants.


The Car Ferry Hours for Christmas Day and New Years Day
On both days the first crossings will depart Isla Mujeres at 8am and Punta Sam at 9am.
The earlier crossings are cancelled on these two days (only).

The municipal Director of Tourism, Gustavo Rodriguez Orozco, said hotel occupancy is currently at nearly 70% and is expected to reach nearly 100 percent between December 24 and January 3rd. At this time the island is not "packed" with visitors, as often happens during peak seasons. However, an increased number of tourists are present in the streets, and there are many visitors arriving with luggage, which indicates they are spending the night. He said,"This year will close very well, and we cannot complain, because we hardly had an off season throughout 2015."
The golf cart rental agencies report that demand is nearly 100%, and boating activity has increased since the port reopened for navigation by small boats. Consequently the tourist cooperatives report that demand is at about 80 percent for their snorkeling tours.
The Director of Tourism said it is important to have controls for the comisionistas so they provide good service, and he said the tourists will have more confidence in a broker who approaches them wearing a uniform and ID badge. He said they plan to impose the same controls on the jewelry comisionistas, requiring them to wear proper uniforms and ID badges. He said in respect to the tourism service industry, we want visitors to return and the best way to have that happen is to treat them with respect, kindness, and warmth, while not disappointing them in any way.
He said that in 2016, as a Pueblo Magico, there will be different projects aimed at taxi drivers, the lanchero boat crews, restaurateurs, comisionistas, and the commercial sector in general, that will focus on preparing those who provide services to tourists so they are better equipped to provide an excellent level of service to those who visit Isla Mujeres, Pueblo Magico.

December 25-30 (not the 28th) 10a-2p & 6p-9p  Casa de Cultura Performances by dance troupes of the National Congress of Mexican Folkloric Dance..."A fragment of the mosaic mural of Mayan culture" 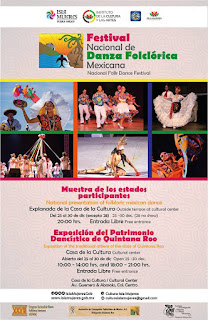 Dec. 31  New Year's Eve Festival on the Town Square.  Tables can be reserved at the entrance to the Town Hall 10am-3pm.
People observe the sunrise at Punta Sur on New Year's morn.