Agapito welcomed the 2 millionth tourist to arrive this year

Cabbies to receive their lots today

Lanrry PARRA
ISLA MUJERES, 16 de diciembre.-
Leer más...
The leader of the taxi union of Isla Mujeres, Eduardo Peniche Rodriguez, confirmed that 280 residential lots will be delivered to 280 members of the union today at noon, for the creation of the taxistas of Isla Mujeres colonia on the mainland in the Continental Zone of the municipality. Also at this meeting, there are 30 operators from the oldest group who will receive their respective concessions to work as socios in the union. These concessions are given after 11 to 12 years, when they are allowed to convert to socios in the union.

Committed to standards of quality

Lanrry PARRA
ISLA MUJERES, 16 de diciembre.-
Leer más...
The Mayor, Agapito Magana Sanchez, recently attended the ceremony for the White Flag certification of the beach of the Hotel Excellence Playa Mujeres, on the mainland. The Excellence Group Luxury & Resorts have 593 meters of beach which have been certified, which reflects their commitment to quality and the environment, and demonstrates the success of efforts between private industry and the government.

Isla Mujeres – ARRIBÓ A LA ISLA EL TURISTA NÚMERO 2 MILLONES DE ESTE AÑO
The two millionth passenger to Isla Mujeres this year arrived on the noon ferry, and was greeted with a party atmosphere, a warm welcome, and gifts by the Mayor and other governmental officials, business leaders, and the public in general. The Ludwig Sheldon family from North Carolina (USA) were greeted with hugs, applause, music, flowers, and gifts. The gifts were donated by businesses including:  Garrafon Park; the jewelry stores Opal, Pau Pao, and Cris & Mel; Prisma golf cart rentals; Dolphin Discovery; the restaurants Rolandis & BallyHoo; and the souvenir store MargaritaVille. The gifts include a day's rental of a golf cart, passes to Garrafon Park, swimming with the dolphins, dinners, silver necklaces, un juego de zaarapes, and entrance to the Sculpture Park, Mundaca Hacienda, and the Tortugranja.

Isla Mujeres: Leader in the number of meters of beach that have been certified
The Municipal President Agapito Magaña Sánchez attended the ceremony for the White Flag certification of the beach of the Hotel Excellence Playa Mujeres, on the mainland.

~~~~~~~~~~~~
From the Director of Culture..... (LINK to the Cultura FB page)
Tonight at 8p on the Town Square, there will be a performance by the internationally and nationally acclaimed Band of the Navy. Free. 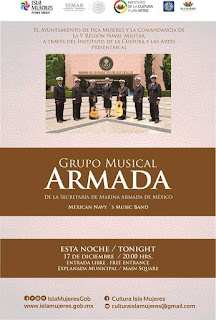 Jobs available
Hay vacantes [+] Ver mas
Hotels are reporting occupancy rates of 70 percent, and expecting this to increase to 80-90 percent on Saturday and thereafter.  The Director of Tourism estimates that occupancy will be above 95 percent during this holiday period. Some of the small hotels who lack an online presence have lower rates of occupancy, and are awaiting reservations by phone or direct arrivals.
The CROC labor union reports they have a variety of jobs available from at least six companies with available positions that include cooks, maids, receptionists, waiters, dishwashers, bus boys, and others.


Improving the image of the island
Alistan proyecto de imagen urbana [+] Ver mas
This information has already been translated about improving trash collection with scheduled collection times and plans to implement rules prohibiting leaving cans in the street except during those times.