Lanrry PARRA
ISLA MUJERES, 12 de septiembre.-
Leer más...
The Director of the Community Hospital, Pedro Zapata Loya, said they recently treated three local people who showed symptoms that could be dengue, including fever and bone pain, and samples are being analyzed at a laboratory in Cancun. He said they have also seen three possible cases of  chikungunya in foreigners from the Philippines and Australia, which are considered imported, and their samples are also being thoroughly analyzed in a Cancun laboratory. They are awaiting results to confirm or deny the presence of these diseases in Isla Mujeres.
The hospital director said the body of water near the hospital poses not threat regarding dengue or chikungunya, because in this type of water there are only small black flies, whose bite is quite painful, but they don't propagate these diseases. The mosquitoes that cause dengue or chikungunya breed in the clear water that collects in containers and tires left in yards and on roofs. He explained that this water that collects in objects in peoples yards is the problem, and not bodies of water such as the one located near the hospital. 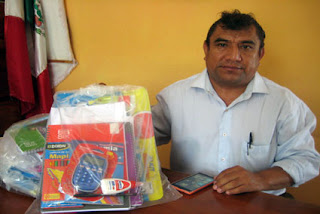 Lanrry PARRA
ISLA MUJERES, 12 de septiembre.-
Leer más...
The procession departed at nine o'clock, with about 500 parishioners participating, which is more than recent years, accompanying the Virgin of Caridad del Cobre to Isla Contoy. The procession began at the church of the Virgin of Immaculate Conception, down Rueda Medina Avenue to the concrete pier, where they boarded boats and departed for Isla Contoy.
There were two large boats with a capacity for about 400 people which were available, yet insufficient for the hundreds who gathered for this annual event. Those who could not board had to return home with their meals and drinks which they had prepared the day before. The boat carrying the image of Our Lady of Charity was accompanied by about 100 small boats of fishermen and other seamen and their families.
The Mass on Isla Contoy when the image was placed in her niche was held at 11am, and then the families remained for a time of fellowship in the protected area. Around 2 pm, the boats began returning to Isla Mujeres. Traditionally, Our Lady of Charity remains in Isla Contoy for the rest of the lobster season, and a few days after it ends, she is returned to Isla Mujeres.
This religious procession involved the fishing cooperatives, the tour providers, the whale shark licensees, the Harbor Master, the Navy, and the ferry companies.

The new leadership of the fishing cooperative "Patria & Progreso" were elected at a special meeting in June. The records were removed from the office and the new administration has been unable to obtain them from the previous administration. They filed a legal complaint with the Ministerio Público del Fuero Común de Isla Mujeres, which has not yet yielded results.

There are civil servants and community members with various opinions about the small body of water located about 10 meters from the new hospital, which recently opened. It is unknown whether it is connected underground with other bodies of water in the area of La Gloria and Sac Bajo, since the interconnections have been affected by roads. Staff from the department of Parks and Museums and from the department of Ecology, equipped with a net, caught a small crocodile, while neighbors say they have seen at least three.Some say the space of 4000 square meters should be filled in, while others say there should be studies done regarding the environment, as well as cost-benefits assessments.


In addition to the information previously translated, this says the drowning occurred near the geotube 'whales', in an area where there is no strong current. It is suspected that alcohol may have been a factor, and the smell of alcohol was present during CPR. He was here to spend the day with his girlfriend, and was residing in Cancun. This is the third drowning victim this year, with one being a South American who was diving in the bay, and the other was from Chiapas, at the dangerous beach "Media Luna", where there are warnings not to enter. 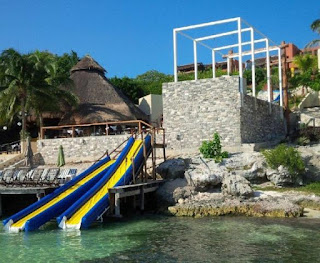 In addition to the information already translated, this notes that the municipal Department of Urban Development and the Environment closed the water park for lack of a building permit, following an investigation in response to citizen complaints from neighbors alleging that the site did not have all the required documents. The attorney for the foreigner presented papers the same day, and will obtain the rest from his office in Cancun. They have 48 hours to present the documents, which should be delivered on Monday. If a fine is imposed, it is based on the number of square meters of construction.

The inauguration of the second phase of the wastewater treatment plant is scheduled for January, according to Aguakan manager Jose Pinzon Sarabia. He said this will double the capacity of the treatment to 60 liters per second. The work is currently 40-50% complete. This work will allow residents at the south part of the isle to join the wastewater network, as well as treating the wastewater of companies and the large tourist attraction Garrafon. There are hundreds of homes whose wastewater is injected into the subsoil without treatment, risking leakage on the beaches.  This work began its final phase two years ago with an investment of more than 800,000 pesos. The works include drilling a well for filtration and construction of hydraulic lines and connections. Currently the treated water is injected underground to some 100 meters, according to a protocol, where it returns to the environment.

The local AA group will participate in the national campaign held annually in September to prevent alcoholism among young people, with the date and location to be announced before the end of the month. 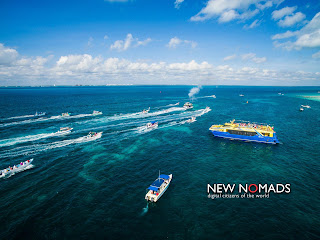 Friday, Sept. 11 Outdoor movie at 7:30p at the Dome of the Bicentennial Plaza in colonia La Gloria, free
~~~~~~~~~~~~~~~~~~~~~~~~
The schedule of activities for the patron saint of the fishermen, Our Lady of Charity:
On Sept. 4th, the fishing cooperative "Caribe" will participate at the church Sagrado Corozon (Sacred Heart, in la Gloria) with a regional dance presentation "“Inmaculada Concepción” (Immaculate Conception).
On Sept. 5 the cooperative "Isla Blanca" will participate with host Enrique Najera Morales.
On Sept. 6, it is the cooperative "Patria & Progreso" with the choir of the Niñas del DIF; and religious songs by singer Ana Laura .
On Sept. 7, the cooperative "Ceviche Tours" will have the singing of the Las Mañanitas at 11pm (This is the 'birthday song' and is sung to patron saints before midnight when their day starts.)
On Sept. 8, the cooperative Un Dia Perfecto will host, and all the cooperatives will have traditional dances and festivities.
Saturday, Sept. 12 Concrete pier  Procession to Isla Contoy with the Virgin of Caridad del Cobre, preceded by a boat decorations contest with prizes of 2000 pesos, 1500 pesos, and 1000 pesos. This is preceded by a Mass at 7am at the Church of Immaculate Conception on the Town Square and a procession to the pier. Priority for space on the boats will be given to those in the procession from the Church, which is expected to arrive at the dock around 8am. There will be two or three larger boats provided for the public, who are encouraged to bring food and drink since none is available on Isla Contoy.~800 people are expected to participate and ~80 small boats.
~~~~~~~~~~~~~~~~~~~~~~~~~~~~~

Wednesday, Sept. 16  Independence Day  There will be a parade

Monday, Sept. 21 9a Red Cross in La Gloria  Clinic for Diabetics
If you know any interested islanders, please invite them to our annual Diabetes Clinic. Health professionals will be testing blood, offering diabetes education and distributing meters, strips & other supplies for people with Diabetes. This is completely free. For more info, email westofcuba@gmail.com