Leer más...
The Harp Fest began on Friday in Isla Mujeres at the Casa de Cultura, and then there were more presentations in Cancun at the Parque de las Palapas. This was the second edition of this festival which started in 2008, and featured harpists from Japan, Chile, Colombia, Venezuela, Paraguay, and Mexico. It featured Celso Duarte, a Paraguayan harpist with a career spanning more than 40 years, as well as Conjunto TlenHuicani, a group that has been representing Mexico around the world. This festival includes free concerts in Isla Mujeres, Cancun, and Puerto Morelos, as well as private concerts at large hotels. The festival opened in Isla Mujeres on Friday, continued at the Las Palapas Park in Cancun on Saturday, and concluded at the Central Park in Puerto Morelos.

Leer más...
See translation below, also. This article notes that  wheelchair basketball team of  “Balleneros de Isla Mujeres” consists of  Manuel Francisco Pérez Ayala, David Fernando Collí Cupul, Luis Antonio Cahuich Celis, Jesús Molina, Ciro Crombet and Eduardo Ríos. They played an exhibition match with the state DIF Tigres team, which was enjoyed by the island families in attendance.
Sra Marthy Vargas, president of the municipal DIF, thanked everyone who helped with the project and noted that the DIF team has worked on various fundraising events. Names of officials in attendance are given in the article.

The Department of Civil Protection responds immediately to any emergency that occurs.

Historical items that were taken from the Mayan temple at Punta Sur are in a museum in Europe. Years before the island was recognized as the Pueblo of Dolores by the Yucatan government in 1850, visiting foreigners were able to plunder it because of the indifference of the Mexican government concerning this small abandoned ruin, which nearly disappeared during Hurricane Gilberto in 1988, when the base of the cliff was undermined. Three years later, personnel from INAH (National Institute of Anthropology and History) "rebuilt" a replica from the hewn stones, away from the original site.
Recently there was a publication of a photograph on social networks that was taken by Laurence Levi, a European who lives in Isla Mujeres, of the pieces (two stelae) that are in a museum in Brussels. This generated enthusiasm for the gathering of the old history, for the tourists to have at hand when they visit the area, because at this time there is a lack of this enriching information which visitors expect.
In this regard, the municipal historian, Fidel Villanueva Madrid responded to questions put to him saying that he had obtained this information relatively recently in 1998, from archaeologist Enrique Terrones Gonzalez of the INAH. He said the document is in his archives and there is an explanatory text of several pages. (He said his archives are currently in boxes while they are being moved, and he plans to provide this information when it is accessible.)
Ronda Winn-Roberts wrote: "Several years ago I came across a reference about stelae from Isla Mujeres in a museum in Brussels, so when Laurence Levy was visiting her hometown recently, I asked her, 'Pleasssse visit the museum'....and she did and here they are," referring to images of a case at the Museum del Cinquantenaire which contains two small stone stelaes and a sign saying they are from the post classical period 1200-1540.
Many foreigners who live on the island are very interested in learning this valuable information about the culture of Ixchel, for both the local community and the foreigners. For this reason it was recommended that a module be opened at the Casa de Cultura, as well as a replica of these stelae for permanent exhibition.
There are other pieces that are in other parts of the world, mainly in the United States, so it was suggested that the INAH collect this information to increase the information about the Mayan ruin.


Here is Lolo's photo of the stelae: 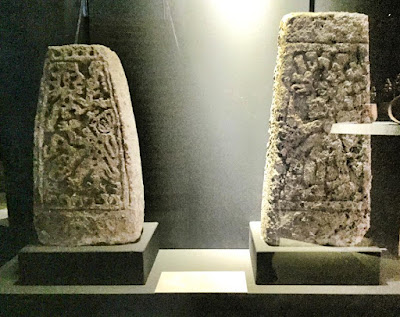 The team “Balleneros de Isla Mujeres” were presented with special wheelchairs and uniforms for each of the players at the Convention Center, in the presence of volunteers and the president of the DIF Marthy Vargas. The Mayor, Agapito Magana Sanchez, was a special guest. Sra Vargas expressed appreciation for this state program, which provided the equipment, of Sra Mariana Zorrilla de Borge, president of the state DIF, with members of the private sector.
Although the team had only had a few days to practice, they participated in an exhibition game, losing by two to three, with one player enthusiastically saying that they will improve with more practice.

On Saturday, Sept. 19 on the Town Square, there will be a ceremony commemorating the National Week of Civil Protection, remembering the devastation of the earthquake that occurred on September 19 in 1985 in the capital of Mexico.

On Sept. 19,  International Beach Clean Up Day,  different groups and non-governmental organizations will participate,  removing trash as well as raising awareness, including advising the fishermen about disposing of oil and other residual liquids in a correct manner to avoid creating risks for the environment.