Benefits to the island of reactivation of air service 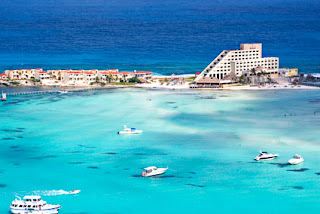 Leer más...
As a result of the reactivation of flights between Costa Rica and Mexico, a group of tour operators and officials will arrive in Mexico and visit Isla Mujeres and explore the attractions of this holiday destination. The municipal Director of Tourism, Gustavo Rodriguez Orozco, said due to the efforts of the Convention and Visitor Bureau, tour operators and officials from Costa Rica will visit Isla Mujeres on Saturday, Sept. 12.
They will visit and photograph local attractions to disperse them throughout their country, including the Hidalgo avenue area downtown, swimming with the whale sharks, and they will be offered a meal  by the Tourism department of tikinxic and ceviche on the beaches of the isle to become familiar with the local culinary specialties. In addition to visiting Isla Mujeres, the Costa Ricans will visit other destinations in the state, including Cancun and the Riviera Maya. 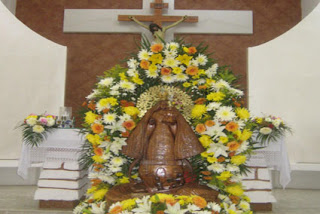 ISLA MUJERES, 10 de septiembre.-
Leer más...
Everything is ready for the procession on Saturday of Our Lady of Charity from Isla Mujeres to Isla Contoy, with dozens of small boats and at least a couple of larger vessels. It is scheduled to depart from the concrete pier next to the cargo ferry at 8:30am, after a Mass is conducted at the downtown Church of Immaculate Conception, in honor of the Virgin of Caridad del Cobre.
To encourage the participation of the fishing and tourism boats, the head of the Taxi Union, Peniche Eduardo Rodriguez, presented fuel vouchers to the boat owners. There will be a contest of decorating the boats, which will include the offer of 30 fuel vouchers for thirty participating vessels. The prizes will be 2000, 1500, and 1000 pesos, and the deadline to register is Thursday, Sept. 10.
Before the procession, two meetings have been held between the organizers and the boat owners, as well as the port authorities, and representatives of Civil Protection, the Red Cross, and the ferry companies.
Meanwhile, fishermen spent two days cleaning the area of Isla Contoy were the chapel is located and where the Mass will be officiated by Isla Mujeres priest Raul Sanchez Alonso.


As an opportunity to learn the history of Isla Mujeres through photographs from its foundation and during its development, this Friday, Saturday and Sunday at 8pm there will be a projection  of "videomapping" n the façade of Town Hall.

Fulfilling our commitment to financially support families; care packages were delivered to different areas of the municipality.
‪#‎Comunidadenacción‬

Golf cart rental agencies, including Gomar, Cardenas, and Pepes, are parking golf carts and scooters at the public parking area near the Casa de la Cultura. Taxi cab owners say the rental agencies are required to have private spaces for their units. According to a representative of the Ministry of Communication of the Ministry of Transport and Infrastructure, the rental agencies have a total of 550 golf carts. Drivers are complaining that authorities should enforce regulations at the public parking lot by the Casa de la Cultura.

A small sinkhole suddenly appeared at one end of the playground "Las Tortugas" which has caused concern among the parents that it could be hazardous for the children, especially those with disabilities. During recent removal of weeds, the sunken area was noted on the northeast part of the park, below a walkway, under an register for the electrical system. A tree was placed to prevent any falls by children, however some parents have asked that the park be closed for one or two days to inspect the perimeter for any other potential collapses and to repair this area.
This park is located at the intersection of Calle 22 and prolongacion Martinez Ross, near the senior citizen's club: Club de la Gente Grande, and was built in 2009.

The Chief of Police, Joaquin Poot Acosta, said that because of good results obtained in the past, the weekend checkpoints will continue on the island, from Friday nights through Sundays. There will, of course, be special attention given during the Independence Day festivities this month. Beyond that, the checkpoints will continue on the weekends, when the number of tourists increase and the safety of the community needs to be ensured.
The officers of the Traffic department are stationed at the two roads leading from downtown to the colonia neighborhoods. The police chief said, "From those points, we have detected various cases of people driving while intoxicated, and potentially they could have become accident statistics."

Friday, Sept. 11 Outdoor movie at 7:30p at the Dome of the Bicentennial Plaza in colonia La Gloria, free
~~~~~~~~~~~~~~~~~~~~~~~~
The schedule of activities for the patron saint of the fishermen, Our Lady of Charity:
On Sept. 4th, the fishing cooperative "Caribe" will participate at the church Sagrado Corozon (Sacred Heart, in la Gloria) with a regional dance presentation "“Inmaculada Concepción” (Immaculate Conception).
On Sept. 5 the cooperative "Isla Blanca" will participate with host Enrique Najera Morales.
On Sept. 6, it is the cooperative "Patria & Progreso" with the choir of the Niñas del DIF; and religious songs by singer Ana Laura .
On Sept. 7, the cooperative "Ceviche Tours" will have the singing of the Las Mañanitas at 11pm (This is the 'birthday song' and is sung to patron saints before midnight when their day starts.)
On Sept. 8, the cooperative Un Dia Perfecto will host, and all the cooperatives will have traditional dances and festivities.
Saturday, Sept. 12 Concrete pier  Procession to Isla Contoy with the Virgin of Caridad del Cobre, preceded by a boat decorations contest with prizes of 2000 pesos, 1500 pesos, and 1000 pesos. This is preceded by a Mass at 7am at the Church of Immaculate Conception on the Town Square and a procession to the pier. Priority for space on the boats will be given to those in the procession from the Church, which is expected to arrive at the dock around 8am. There will be two or three larger boats provided for the public, who are encouraged to bring food and drink since none is available on Isla Contoy.~800 people are expected to participate and ~80 small boats.
~~~~~~~~~~~~~~~~~~~~~~~~~~~~~

Wednesday, Sept. 16  Independence Day  There will be a parade

Monday, Sept. 21 9a Red Cross in La Gloria  Clinic for Diabetics
If you know any interested islanders, please invite them to our annual Diabetes Clinic. Health professionals will be testing blood, offering diabetes education and distributing meters, strips & other supplies for people with Diabetes. This is completely free. For more info, email westofcuba@gmail.com