Health authorities advise precautions against respiratory illnesses during this season 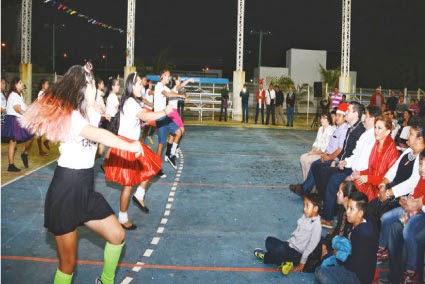 Lanrry PARRA
With joy and excitement, hundreds of children, teens, and adults enjoyed the Christmas festival offered by the DIF social service agency, and its president Marthy Vargas de Magaña and Mayor Agapito Magaña Sánchez. Eighty high school students delighted onlookers with their choreography.
The event took place Saturday under the dome in la Gloria, and began hours before with a caravan,  that included decorated golf carts and motorcycles, which traveled through the streets of the island giving out sweets and presents,.
ISLA MUJERES, 21 de diciembre.-
Leer más...

Still seeking the six Cuban 'balseros' who arrived the day before yesterday: "Disappeared from the face of the earth"

Lanrry PARRA
ISLA MUJERES, 20 de diciembre.-
Leer más...
After almost 48 hours of searching by the municipal police, members of the Navy, and personnel of the National Institute of Immigration (INM), the whereabouts remain unknown of the alleged six missing Cuban balseros, who include two women. Searches were conducted on the island and on the mainland without result. The municipal chief of police said there is no specific operation seeking them, but they are maintaining vigilance to try and locate them. There are residents of the colonia Electristas who said a cabbie transported six people to a home there, and there is uncorroborated information about a taxi trying to take them to the ferry.
The Harbor Master said he will have their small boat removed from where it was abandoned. If necessary it will be dismantled, to avoid contaminating the beach.  It came ashore in a rocky area of the coast along the Caribbean Sea, near the hotel Mia (formerly the Avalon), with at least 10 undocumented Cubans, of whom four were detained and six are still missing.

Now there have been 56 cases of decompression
Cases of decompression continue to occur with a total of 56 so far, with the most recent being Ernesto Lara Yanez, 56, who was diving more than 80 feet down, during one dive of 50 minutes. The physician said when the diver left the sea, he presented signs of 'moderate' decompression with numbness in his right leg. He was treated and will require at least five sessions in the hyperbaric chamber.

Ultramar will begin 2015 with an investment of 2.5 million pesos to provide better service to their customers, said the general manager of the ferry company, Arturo Vega Baez. This will include a dome in Gran Puerto to protect passengers from rain while they are boarding or departing the ferries. The project will begin in early 2015 so it will be completed by the rainy season. The state Port Authority are planning a similar project for the dock outside the new terminal in Isla Mujeres.
There is no definite start date for the Gran Puerto roof, but it is expected to take place in the first half of 2015.  They are expecting a strong season at the end of the year and have arranged to have six boats covering the routes between Isla Mujeres and Grand Puerto & the Hotel Zone, and they will add additional crossings if necessary.

Accompanied by the deputies (legislators) José Luis (Chanito) Toledo and Juan Carrillo, the mayor Agapito Magaña Sanchez gave the traditional turkeys for Christmas dinners to the fishermen of the different fishing cooperatives, strengthening ties with the unions & encouraging healthy living.

Gracias a todos los que nos acompañaron en el festejo hecho con mucho cariño.
Thanks to everyone who joined us in the celebration done with great affection

Likewise, they were encouraged to continue to safeguard the security of the island in an honestly.
De igual manera se les incentivó a continuar salvaguardando la seguridad de la isla de manera honesta.

The Mayor Agapito Magana Sanchez made a tour of the new public bathrooms that the City has built, which will soon be inaugurated. The architecture is typical of the Caribbean and there is special wood on the exterior to resist the environment for many years. The mayor was satisfied with the work which was done with an investment of about 2 million pesos.

Harbor Master in agreement about removing the rest of the sailboat

The Harbor Master of Isla Mujeres, Ismael Gonzalez Gil, is in agreement that the remains of the sailboat "Chiron" should be removed, to prevent it possibly being tossed onto the coral reef Ixlache during a hurricane. The final decision is the responsibility of PROFEPA (Federal Environmental Protection Agency) because the vessel is within the jurisdiction of the Isla Contoy National Park, where it capsized on November 28th.
The boat suffered a broken mast, causing the loss of  their GPS system while in the Yucatan Channel, about 40 miles for Cabo Catoche and they were traveling 'blind' when they ran aground in the early hours of Friday. The forces of the winds and the currents due to a 'norte' (cold front from the north) caused a crack from bow to stern that divided it in two, and then several pieces were dragged about 50 meters, and these parts ended up in water over 7 meters deep, in a sandy area. The Harbor Master said if the federal agency decides that it should be removed, the cost will be borne by the owner of the boat. 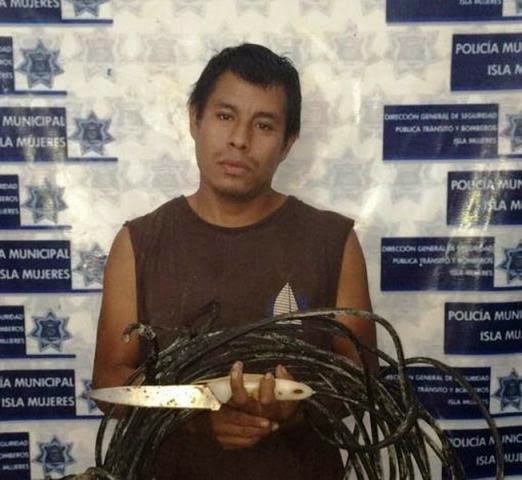 Municipal police arrested Ausencio Martínez Cruz, 28, with a roll of 26 meters of electrical wiring and lighting from the eastern malecon, when they found him behind the offices of the Federal Electrical Commission (CFE). The incident occurred on Saturday, and the mason, who is from Chiapas and lives in colonia Miraflores, was arrested at 9:45am.
Regarding the undocumented Cubans who arrived near the Casa de las Rocas  in a small boat, the Chief of Police said they have not found the remaining refugees. Four were immediately turned over to the Immigration authorities (INM). The INM and the Navy have not found those who escaped. An alert for the search was put out over northern Quintana Roo from the first moment, with the arrival of another group in Cancun on the same day. 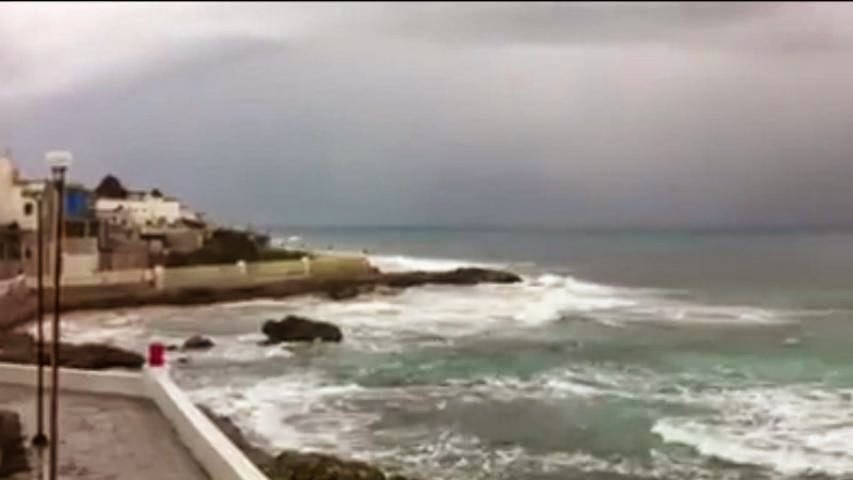 Poor weather prevented large numbers of tourists from visiting the island on Saturday, and it is hoped that it will improve for Sunday (It did.) Hotel occupancy is reported to be over 60 percent at the major hotels.

For donations to Zapatos Para Los Ninos.. please contact Greg at bullridersnider@yahoo.com, or find them on Facebook at "Shoes For The Children." 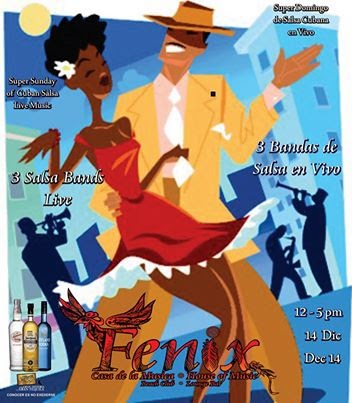 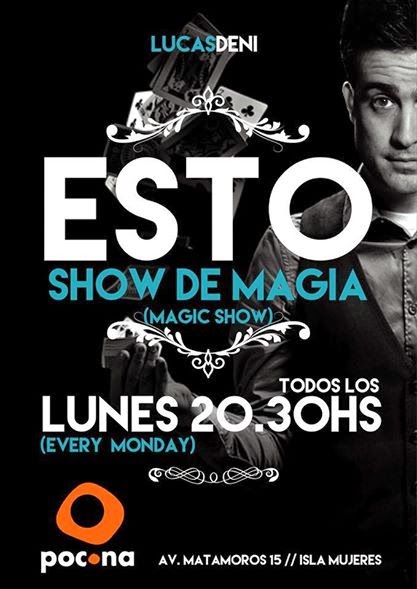 This event was last evening...the party bus, floats & decorated golf carts gathered near our house beforehand. It was cool....lotsa flashing lights on the party bus & the float was pretty & bright....and played carols in Spanish. 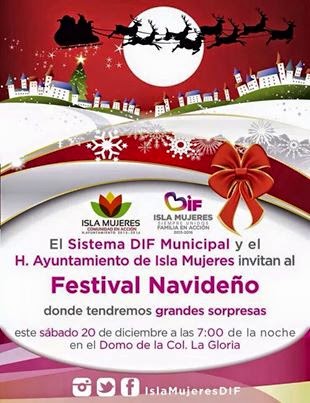 The DIF event will take place Saturday, Dec. 20 at under the dome in colonia La Gloria, with entertainment, refreshments, and prizes for young and old. The festival will begin at 6pm at the kindergarten "Enriqueta Comarillo" with a caravan of vehicles including trucks, cars, motos, golf carts, tricycles, and bicycles, that will pass thru the colonias distributing sweets, treats, and gifts to children along the way, and inviting them to attend the event. The procession will end at the dome in La Gloria, where there will be lots of fun with music and performances by several shows, and refreshments will be provided. Prizes will be awarded, and it is hoped that many families will enjoy this Christmas party.