Today Isla Mujeres reports a new case of C-19 cases for a total of 227 with 20 deaths and 190 recovered. On the national map for 12/8, the municipality reports 155 suspicious and 125 negative. For 12/8, the state geoportal reports 1 active case in colonia El Canotal. 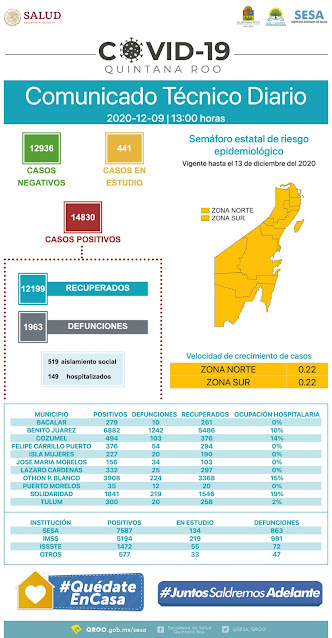 Here's an overview of Mexico's national vaccination strategy, which was explained yesterday by the President, Dr Lopez-Gatell & the Secretary of Foreign Relations.
Stage 1: Later this month, the Pfizer/BioNTech vaccine will be given to 125,000 medical workers in Mexico City & Coahuila who are working on the front lines against C-19. The military will assist with the logistics, which include very cold storage & a second 'booster' dose in January. Mexico's review immediately follows tomorrow's public hearing by the FDA, who have been in collaboration with one another, which expedites the process. 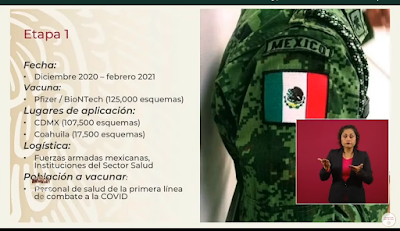 Basic Timeline of Vaccine Administration:
Stage 1-Dec-Feb: Medical personal on C-19 front lines
Stage 2-Feb-April: Health care workers & people 60 and older
Stage 3-April-May: People age 50-59
Stage 4-May-June: People age 40-49
Stage 5-June 2021-March 2022: The rest of the population
Dr Gatell explained other risk factors and considerations. He said that 40% of healthcare workers have been at home since March, because of recommendations to protect people over 60 or with comorbidities, who will receive vaccines with the other health workers. There are ~200 candidate vaccines worldwide, of which 12 are in Phase III trials, and Mexico has agreements or contracts signed for three of them. Also, Mexico just signed a non-binding agreement for access to the Janssen vaccine by Johnson & Johnson and Phase III trials began in Mexico last week, making us one of nine countries participating and giving us preferential access over those not participating. 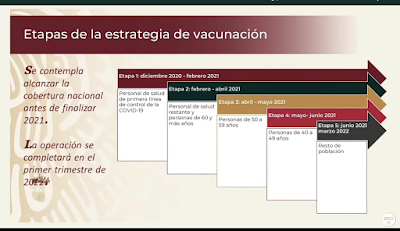 Stages 2-5 begin in February with all available vaccines being administered throughout Mexico at specific locations via the National Health System, to the entire population, prioritizing by age groups. 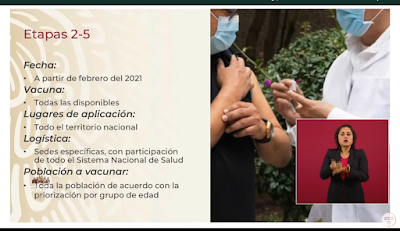 Prepurchase & Phase III Trials of the CanSino vaccine. Fifteen states, including Q Roo, are participating in these trials, providing 15,000 volunteers of the 40,000 worldwide. This week, Mexico expects to sign a final contract for 35 million doses to be delivered between January and September 2021. Application should be made in upcoming weeks for emergency approval, as the trials advance. (Ed-2000 volunteers are expected to participate in Q Roo, and data analysis is being done in Canada, for this Chinese vaccine.) 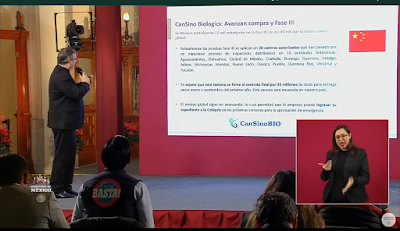 Immunization with the Pfizer vaccine has already begun in the UK and the US is expected to approve it tomorrow, followed by Mexico's COFEPRIS, with delivery of the first quarter-million doses later this month. Mexico has a signed agreement for 34.4 million doses, with one million arriving monthly in January, February and March, and 12 million in April. 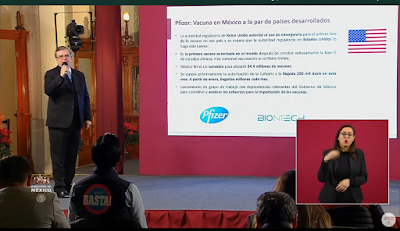 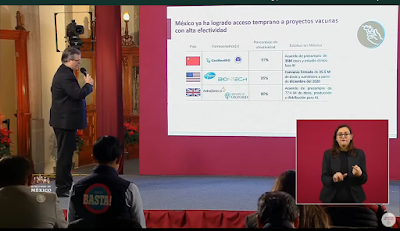 Mexico has access to the 9 international vaccine projects in the COVAX portfolio. 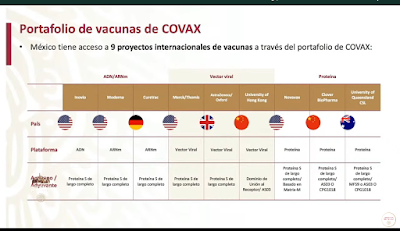 Mexico could have access to nine additional vaccine projects that are currently being evaluated as part of the COVAX II portfolio. 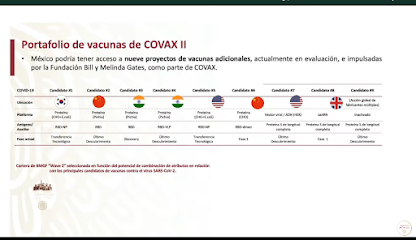 Advances are taking place with the AstraZeneca vaccine, which has been in clinical trials in Brazil, South Africa and the US, with results to be announced next month of a new US Phase III trial. AZ/Oxford has an agreement with Argentina, Mexico, and the Slim Foundation for the production of 150 to 200 million doses of the vaccine for Latin America. Delivery is expected in March or April. The vaccine is being offered at cost and not-for-profit during the pandemic. 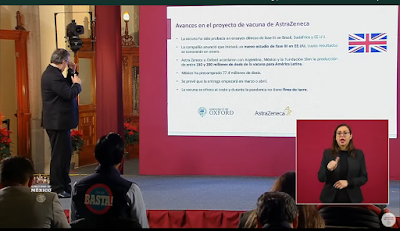 Mexico is part of the worldwide vaccine studies. 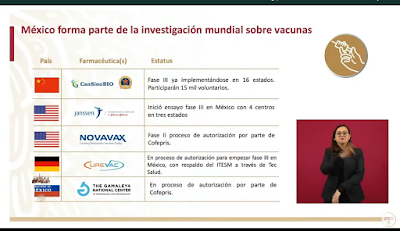 Facilitation of international cooperation investigating C-19 treatments. The SRE (Secy of Foreign Relations) has mapped out various treatments for C-19 that are used in other countries, submitting documents to COFEPRIS for these which are supported:
>Remdesivir is for hospitalized patients and has been authorized in about 50 countries, including FDA approval in the US. Authorization request submitted to COFEPRIS on November 25th.
>Bamlanivimab is a monoclonal antibody for non-hospitalized patients that has been authorized in the US & Canada, with its authorization request submitted to COFEPRIS on Nov. 26th. >Mexico is in communication with foreign research institutes to begin studies in Mexico of Nafamostato & Camostato (South Korea) and Artemisia Annua (Germany).
>COFEPRIS will be presented with requests for authorization of five other drugs, listed in the last point, which have had good results in other countries. 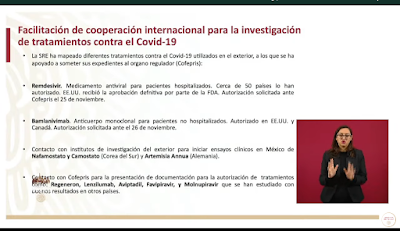 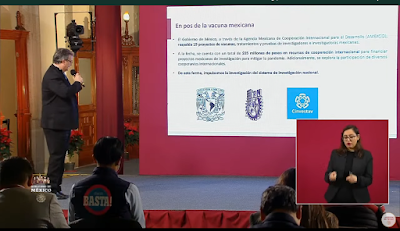 From the President--"We are on the forefront to be among the first to have the vaccine, which is going to be applied universally, to everyone. It is a right of all Mexicans, it is for the entire population, free of charge." 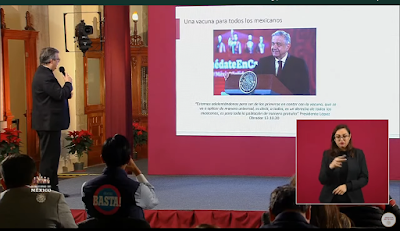