Today the total number of C-19 cases Isla Mujeres remains at 226 with 20 deaths and now there are 190 recovered. On the national map for 12/4, the municipality reports 125 negatives and 154 suspicious. The state geoportal for 12/4 reports one active case in colonia El Canotal. 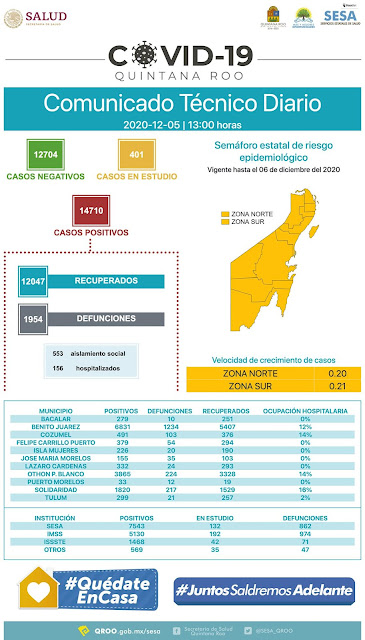 Yesterday, Naval personnel responded to a call and rescued two people who were aboard the sailboat "KAMAL", which was adrift 3.7 miles (7 km) southeast of Isla Mujeres, after "having presented mechanical failures in its propulsion system and its sail". The vessel flies a Canadian flag, and had two crew members aboard, a Mexican female and an American male, who were found to be in good health and did not require any medical attention. The boat and crew were taken to the Isla Mujeres anchorage area, and were met by Naval Health personnel and personnel from the Isla Mujeres Harbor Master's office, International Health, Immigration,  and Customs. (photos) LINK

The Mayor of Isla Mujeres and officials with the state Prosecutor's Office met with families of four construction workers at the Planet Hollywood Hotel on Isla Blanca who had disappeared, and now four skeletons were found on the property, in a jungle area. The mother of one young worker ran out of the meeting in tears after learning that her son's body was identified, via DNA tests and his clothing. The process of identification of the other skeletons continues, and there are reports of 8 persons missing in the area. Nothing has been found inside the Planet Hollywood Hotel, whose personnel are cooperating with the investigation. Isla Blanca is part of the mainland area of the municipality of Isla Mujeres.  LINK