Today Isla Mujeres continues to report a total of 226 cases of C-19 with 20 deaths and 189 recovered. The state geoportal now reports one active case in colonia El Canotal. For 12/1, on the national map our municipality reports 151 suspicious and 123 negatives. 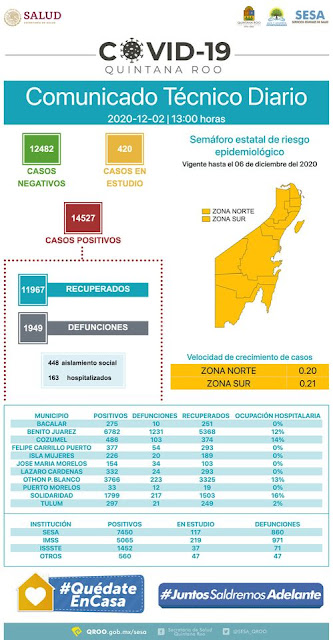 Isla's Patron Saint festivities were an annual regional event, back when the state was still a Territory whose inhabitants were isolated from each other by the lack of roads. Bulls, bands & families ferried to the island to join the festivities. This tradition has lived on, as evidenced by the large number of horses & riders that travel here for the Cabalgata procession & associated celebrations. Of course, the public events are suspended this year due to the pandemic--here's last year's history article about it. I'll publish some photos from previous years.

For over a century, generations of Islanders have gathered together to celebrate their Patron Saint "Conchita", whose legends include a journey from Spain, discovery in an abandoned sixteenth-century church, and a case of mistaken identity, as well as occasionally shedding tears, starting fires, wandering the coast, and influencing the weather.

In Mexico, Patron Saint celebrations feature a week or two of loud music, dancing, singing, fairs, fireworks, rodeos, religious gatherings and processions. In Isla, this begins tonight at the 7p mass when the icon of the Virgin of Immaculate Conception comes down from her niche to join hundreds of devout islanders walking together thru the downtown streets, singing in her honor. Later there will be festivities on the Town Square with live music and dancing.

"Conchita" is one of three "sister" statues relocated by three fishermen from the ancient Catholic church, Boca Iglesia, in the late 1800's, several decades after Isla Mujeres was founded. The icons are wooden carvings with hands and faces made of porcelain, and the other two were taken to Kantunilkin and Izamal. They were presumably brought to the church by Spaniards in the late 1700's.

Boca Iglesia church is located ~40 miles north of the island, where the Spanish first landed in what is now Mexico, after visiting Isla Mujeres in March of 1517. It was constructed the following year on the site of a significant Mayan city, but the isolated Spanish settlement never prospered.

"Conchita's" first shrine on the isle was a small palapa chapel, and legend has it that when it was time to move her to the church, eight men had difficulty lifting her, although normally two people can easily carry her. After she was moved, the palm chapel burned down, to everyone's astonishment.

Another version of this story says that enemies of the church attempted to destroy the icon in the small chapel, but the four men were unable to lift it, so they ran away, frightened. Their cabin burned down several days later, which was attributed to anger from the sacred image.

Islanders have claimed to see "Conchita" walking around the island or on the sea, perhaps seeking her sisters, and it's said that one morning her dress contained burrs and sand. Residents say they have witnessed the image shedding tears and some have seen her face expressing joy or sadness, or changing to images of their dying or deceased relatives.

In the previous century, musicians & families from around the region would travel to the island to join in this popular festival which will end on her Day, Dec. 8th, when she'll return to her niche after a boat procession around the Bay. Meanwhile, during the next week and half, ~20 groups will hold events in her honor, concluding next Saturday with the Cabalgata horse procession, the vehicle Caravan, and the Mariachi Mass, followed by the communions & other events on Sunday.

There's a local legend that attributes the bad weather that often occurs after the 8th to her unhappiness about the celebrations ending. However, due to a case of mistaken identity, she also gets out for a week of festivities in August, because for her first 24 years in Isla Mujeres, it was thought that she represented the Virgin of Assumption.

Photo #1 of Isla Mujeres in the late 1800's when "Conchita" arrived. #2 is Boca Iglesia, considered by many to be the first Catholic church in Mexico. #3 is the bullring at the 1944 festivities.The bull(s), musicians, and visitors arrived together & it was traditional for the band to strike up a tune in the Bay, and for the attendees to dine on the bull(s). (Bullfights have recently been banned.) #4 is "Conchita" who wears new clothes each year, and past dresses may be on display next to the Church, photo by Tony Garcia.

From the City, it says... In Isla Mujeres, preventative actions are maintained from the sani-tunnel at the entrance of the island, to the Yellow Cap volunteers and the protocols for entry to the public beaches. While the state epidemiological light remains in "Yellow" in Isla Mujeres at least until December 6th, and in the face of the New Normality of the Covid-19 pandemic, the municipal government, led by Mayor Juan Carrillo Soberanis, calls upon the populace to continue to implement sanitary measures and redouble efforts to contain the spread of the disease.
The municipal liaison for Covid-19 preventative actions, Dra Xhanat Tze Gonzalez Mora, said it is important for the populace to continue doing their part at containing the virus, allowing for a balance in health care and economic recovery in the municipality. Therefore, she recommended not visiting family members who don't live in your house, especially if they are vulnerable.
The doctor said, "It is very important that we all continue to contribute so that this disease does not spread; there is still no vaccine and we must continue to care for each other; it is essential to continue with hygiene measures such as frequent hand washing, healthy distancing in busy places, and proper use of face masks; all of this contributes greatly to our health care."
She added that in Isla Mujeres, the preventative measures continue, as you can see, from the main entrance to the island with the Sanitunnel, protocols for entry to the public beaches as well as to the various businesses, and the important fact that in order to reopen, hotels and restaurants had to obtain certifications. She said that since November 16th, 500 rapid tests were administered, which were acquired by the City government, and currently there is ongoing support in control of cases, medical advice, and with some medicines that vulnerable people require.
Dra Gonzalez Mora called for reinforcement of measures that have been applied nearly all year, to avoid the likelihood of an influenza infection joining Covid-19, due to the proximity of the winter season. She concluded, "In Isla Mujeres, although the number of infections has been maintained, there is still community transmission, and I implore you, don't let your guard down."